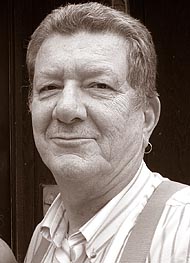 On Wednesday, Feb. 28, John Neff passed at Friends Care Center after a very brief illness.  He was 72, had just had two hips replaced and was looking forward to a long and mobile life. He had been a long-term resident of the village, first coming here in the 1960s to watch Shakespeare plays at the Antioch Amphitheater.

John grew up on a farm in Greenville, Ohio, graduated high school there and took a degree from the General Motors Institute in Flint, Mich.  He worked for the Antioch College engineering department, providing technical support and teaching dulcimer-making with Dean Kimball. He moved into a technical support role with the science area before taking a job as a robotics engineer in the Vernay Laboratories production facility. He married Lisa Hauck and moved with her to China, working with Sprague Electric while Lisa pursued her studies. Returning from China, he took a job with Techneglass in Columbus from which he retired.  He and Lisa were divorced.

Never one to do anything by halves, John avidly pursued gardening, building and flying radio-controlled model airplanes, fly fishing and old west fast draw target shooting — joining the Single Action Shooting Society under the alias “Dusty Rusty.” He made musical instruments, specializing in dulcimers, guitars and mandolas, and played old time music with friends.  In the mid ’70s he built a battery-powered car, The Electric Neff, in which he zoomed silently around town to shop and visit friends.

Most mornings he could be seen drinking coffee with friends at Dino’s or enjoying breakfast at the Emporium. He had an awesome way of caring about people in his life, and everyone who knew him loved him.

John is survived by the love of his life for 19 years, Deborah Fugett, and his longtime friend Joe Ayres, both of Yellow Springs, and by his brother Gerald (and Betsy) Neff, of San Diego, niece Kimi and her family of Peru, and cousins in Ohio.

John donated his body to medical science. There will be a memorial gathering to celebrate John’s life, to be announced in a future edition of the News.