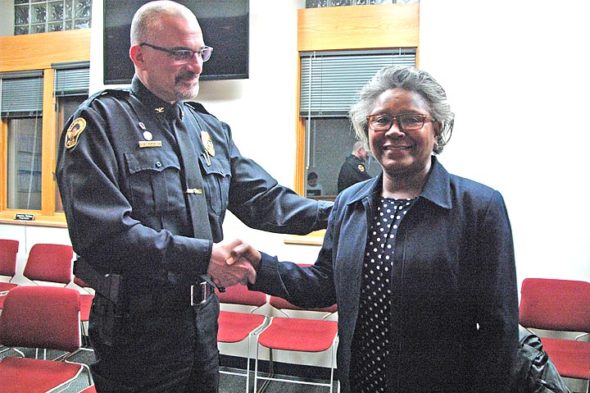 At Village Council’s March 5 meeting, Police Chief Brian Carlson announced that Florence Randolph of Yellow Springs has been hired as the first community outreach specialist in the Yellow Springs Police Department. She will begin her new job on April 2. The new position was created in response to a recommendation from the Justice System Task Force to address the many social work-related calls that police receive. According to a press statement from Carlson, Randolph brings to the job “a wealth of knowledge in social work and working with the justice system.” (Photo by Diane Chiddister)

“This is an ambitious drive to increase affordability with the understanding that we have to be fiscally responsible,” Kreeger said at the meeting.

The proposed initiative focuses on Village utility payments, which have increased substantially since the Village raised rates several years ago.

“In recent months there has been increased citizen concern about the utility costs in Yellow Springs,” the proposal states.

Council Work Session
Village Council will hold a special work session to set its 2018 goals on Tuesday, March 13, at 7 p.m. in Council chambers.
Villagers are encouraged to participate by attending the meeting or going online to prioritize Council’s list of goals. The goals can be found at the Facebook group VillageYS, or at http://www.surveymonkey.com/r/2VDHFTP. Hard-copy goals are also available at Tom’s Market, Dino’s, the Emporium, the library, the Senior Center and the Bryan Center.
“It’s the whole exercise, to not do this in a vacuum but to hear from the public,” Council member Kevin Stokes said at Council’s March 5 meeting.

In a written proposal Kreeger and MacQueen urged Council, as one part of the initiative, to adopt a utillity round-up program that is ready for an action plan in summer 2018. At Council’s last meeting, Village Assistant Manager Melissa Dodd had suggested a start date of January 2019 for a round-up program, which Kreeger objected to as too far in the future. She and MacQueen agreed then to meet and bring back a proposal to Council.

As the second prong of the initiative, Kreeger urged Council to create a Village Manager Advisory Committee on Finance, that would focus on affordability. Initially, the group would study investment protocols and cost/budget analysis. The group would also evaluate whether there’s a need for a Village commission on finance issues.

The proposal suggests that Manager Patti Bates, Assistant Manager Dodd, Council President Housh and Kreeger sit on the committee, with others with financial expertise advising the group.

“We need the financial analysis first,” he said.

The topic was discussion only on Monday. Council members agreed to consider the proposal further at their special work session on setting Council’s 2018 goals, which takes place next Tuesday, March 13, at 7 p.m. in Council chambers. Council President Brian Housh and Judith Hempfling were both out of town and therefore absent at the March 5 meeting.

While such programs are commonly offered by utility companies, they are less often sponsored by municipalities, according to MacQueen’s document. However, the Ohio town of Napoleon has used such a program with no problems in recent years. Programs may be set up so that utility customers are automatically enrolled and may choose to opt out, or are not automatically enrolled, with the choice to opt in.

While the round-up program is one goal for the affordability initiative, it is not the only one, according to Kreeger.

“Just a round-up program isn’t enough,” she said, suggesting that there could be other “safety net” possibilities.

Kreeger suggested that Council ask the Human Relations Commission to examine options for other safety net programs.  Stokes, Council liaison for the HRC, said he would take the suggestion to that group.

“Some kind of definition is necessary,” he said. “The word means too much or too little to too many people.”

Other items of Council’s March 5 agenda will be in next week’s paper.