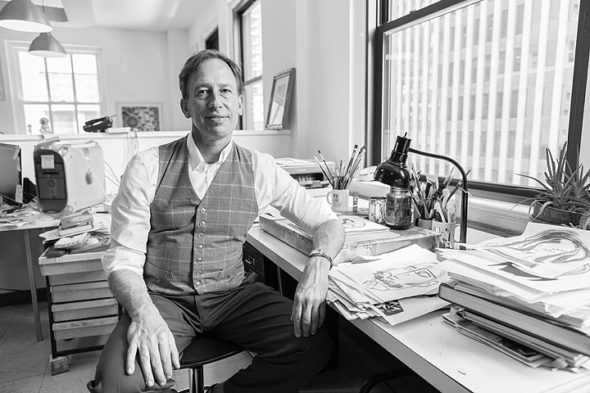 Tom Bachtell, who spent his teenage years in Yellow Springs and now works as an illustrator for The New Yorker magazine, will speak in the “Homecoming” series at the Little Art Theatre next week. The event takes place at 7 p.m. on Friday, April 13, and will feature visual art, classical music and dancing. Tickets, at $25, can be found at www.littleart.com. (Submitted photo by Jennifer Greenburg) 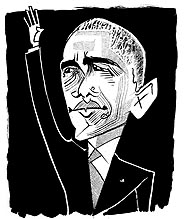 “Yellow Springs was in full flower,” Bachtell said in a recent interview. “And I was taking it all in.”

Bachtell, who now lives in Chicago, will speak about how spending his teenage years in the village has influenced his arts-rich life at the upcoming “Homecoming” event at the Little Art Theatre on Friday, April 13. The event begins at 7 p.m. with a reception hosted by the Wheat Penny Oven and Bar, followed by a welcome at 7:45 and presentation by Bachtell, along with a Q & A, at 8 p.m.

Tickets are $25, and can be reserved online at http://www.littleart.com/homecoming or at the theater.

An artist, musician and dancer, Bachtell plans to incorporate all the art forms he loves into the program, he said recently. He’ll show many of his own drawings and illustrations from The New Yorker magazine — where he’s illustrated the “Talk of the Town” section for the past 20 years — along with the work of those who have influenced him. A classically trained pianist who performs with chamber music groups in Chicago, he’ll also include music in the program.

And he’ll perform several swing dances with Nicole Woods, a friend and dancing partner who will accompany him on the trip.

How do all of these artistic pursuits relate to Yellow Springs?

“It was a nurturing environment. The adults around me were nurturing,” Bachtell said. “I was folk dancing, making music, doing theater. I gained a lot of confidence from that time.”

One of those adults was music teacher Shirley Mullins, with whom Bachtell has stayed in close touch. He’s also still close to his high school friends Polly Case and Wendy Champney, who both went on to become professional musicians in Europe.

Bachtell initially traveled the music route too, training as a pianist at the Cleveland Institute of Music. And while he continues to perform in chamber music groups, he veered toward art as a profession.

Making art, too, was connected with his Yellow Springs years. The vitality of the village and its many interesting people helped foster his lifelong love of people-watching and observing human behavior, according to Bachtell, an interest directly linked to his current work as a caricaturist.

Bachtell was just starting out as an illustrator in Chicago when he created a caricature of writer Tom Wolfe for the publication “Advertising Age.” The drawing caught the eye of New Yorker art editors, who were trying to beef up the magazine’s art. They contacted Bachtell to do an illustration, beginning an association that’s lasted more than 25 years.

That partnership can be seen each week in the magazine’s “Talk of the Town” section, where Bachtell contributes three caricatures of individuals spotlighted by the “Talk of the Town” vignettes. The process is intense, he said. Each week he’s given a heads-up on subjects to draw, and “I’ll get some copy if I’m lucky,” he said. He next dives into research on the individuals, studying photos and film clips.

“I see it as a way of getting to know my subject,” Bachtell said.

Then he starts sketching, trying different ideas. Often, he spends about a day researching and sketching each subject, after which “I send a lot of different versions, there’s a lot of back and forth” to the magazine. After three days, that week’s process is over.

Along with the New Yorker, Bachtell has seen his work published in many national and international publications, including Newsweek, Mother Jones, The New York Times, The Wall Street Journal, New York magazine, Poetry and the Evening Standard in London.
He’s also illustrated books, including creating the cover of “Trump and Me,” by Mark Singer, and “When I Knew,” edited by Robert Trachtenberg. He’s created ad campaigns for Land’s End, the late department store Marshall Field’s and the University of Chicago chamber music series, and exhibited his work in a range of places, including the offices of The New Yorker in New York City, the Bedford Arts Center and the historic Water Tower Gallery in Chicago.

Bachtell’s talk will include his reflections of growing up in a town inspired by utopians, including the Owenites, who settled in Glen Helen for a period in the early 1800s.

That vision of utopia had something to do with the Bachtell family’s arrival here. His father, Sam, was an aerospace engineer working for Goodyear in Hudson, Ohio, when he became disenchanted with the military nature of his work due to his opposition to the Vietnam War. Sam Bachtell was a friend and colleague of longtime villager Chuck Colbert, who invited Bachtell to come work for him in Yellow Springs. Sam Bachtell and his late wife, Mary Jane, decided to take a chance on a new job and a new town. It was a good fit, and Sam Bachtell still lives here.

As well as bringing his family to town, that utopian vision has inspired his own connection to humanity, leading to his life in the arts, Tom Bachtell said.

“Very few places are founded on an idea,” Bachtell said, stating that the founding idea of Yellow Springs had to do with “finding commonality, of loving the other, embracing the unknown. It was about being able to live together.”