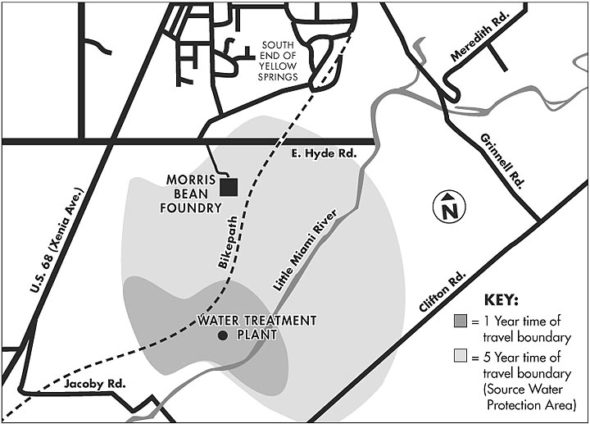 Local drinking water comes from a wellfield south of town located near the water treatment plant. The area that collects water within a five-year time-of-travel to the wellfield is known as the source water protection area.

An update the Village of Yellow Springs Wellhead Protection Plan, first passed in 2001, features new strategies to protect the aquifer that is the source of local drinking water. The document encourages the Village to stay vigilant about pollution threats, test local water more often and educate citizens to prevent groundwater pollution.

Environmental Commission spearheaded the update and presented it at Council’s April 2 meeting. It was approved unanimously. The update can be downloaded here.

According to EC member Deanna Newsom, a local conservation scientist with a background in ecology and sustainable agriculture who drafted the update, there is good news and areas of ongoing concern regarding the state of the wellhead, or source water, protection area. 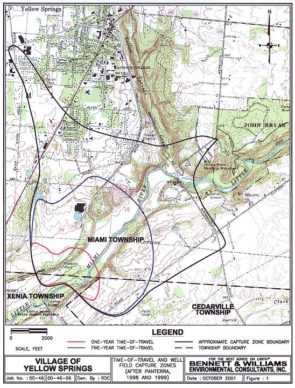 The good news is that no new sources of potential pollution have been found in the wellhead protection area. But previously-identified potential threats are still there, such as the Morris Bean and Company aluminum foundry and residential lawn care chemicals, according to Newsom in an interview this week.

“We need to be more vigilant,” Newsom said. “This is the water that our children are drinking. We have to be sure we’re getting it right.”

The Wellhead Protection Plan was never systematically implemented, according to a 2012 News article, although some actions were taken to protect local water in the intervening years.

Identified in the 2001 plan as the highest-risk potential pollution source in the wellhead protection area, Morris Bean was the primary focus of the plan’s first update. Approximately one mile north of the Village wellfield, Morris Bean has operated an aluminum foundry at its 60-acre property on Hyde Road in Miami Township since 1949.

After volatile organic chemicals, or VOCs, from Morris Bean’s process were discovered in Village production and monitoring wells, the EPA ordered a groundwater cleanup at Morris Bean, which concluded in 2009. Two other pollution issues have become critical at Morris Bean in recent years — an aging sewer plant and sinkholes.

The Ohio EPA had been recommending that Morris Bean upgrade or replace its onsite sanitary sewer system, first built in 1967, since the 1990s. After an inspection in 2014, the sanitary sewer plant was found to be releasing twice the suspended solids into a nearby stream as permitted by the EPA, and by 2016 parts of the sewer plant were discovered by the EPA to be falling apart. Village Council agreed in 2016 to connect Morris Bean to its sewage treatment plant and last year the connection became active. Morris Bean dismantled its onsite plant.  Read the 2016 violation letter from the EPA to Morris Bean. 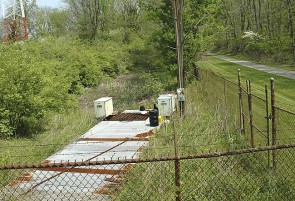 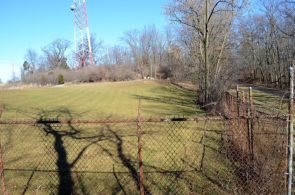 Another concern is the development of sinkholes downstream of where Morris Bean discharges its process wastewater, or water used in the process of casting aluminum parts and cleaning equipment. Because the wastewater entered the sinkholes and went directly into groundwater rather than flowing along the surface to an unnamed tributary of the Little Miami River, the EPA found Morris Bean to be in violation of its discharge permit.

Sinkholes were first discovered on the southwestern edge of Morris Bean’s property by the EPA during an inspection in 2013. Morris Bean filled the sinkhole, but in 2016 the EPA was notified by a citizen that another sinkhole had formed. While Morris Bean fixed the second sinkhole, yet another sinkhole, this one just off of the Morris Bean property, was observed in the fall of 2017 by environmental chemist Audrey McGowin of Wright State University, who was sampling the water with students.

A photograph taken in April 2016 showing wastewater discharging into a sinkhole on Morris Bean’s property.

“I don’t think they’re under any obligation to implement the recommendations, but we hope in the spirit of being a good neighbor, that they would,” Newsom said.

The Ohio EPA has also encouraged the Village and Morris Bean to work together “to protect drinking water resources in such a sensitive geologic setting,” according to one 2013 letter sent by the EPA to both Morris Bean and the Village.

In a brochure it produced for Yellow Springs’ water customers, the Environmental Commission also urges all villagers to take steps to keep contamination from reaching the aquifer, including by eschewing lawn chemicals and recycling hazardous products like paint, gasoline and motor oil, instead of pouring them down drains or storm sewers.

The first phase of the Wellhead Protection Plan, from 1998, is available here.

Read the full story in the April 19 issue of the News.