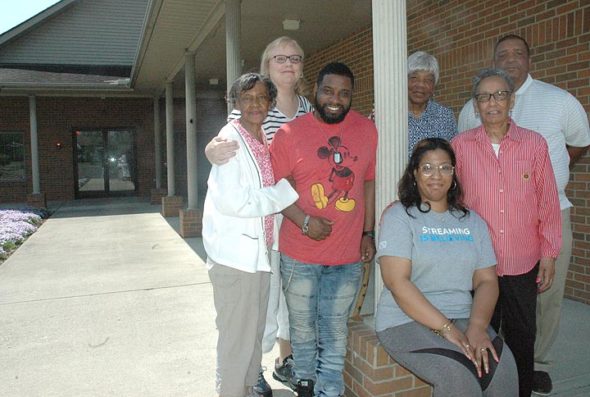 The First Baptist Church of Yellow Springs is celebrating its 155th anniversary this Sunday, May 20, with a special service at 10:45 a.m. Shown above at the church are members and staff, clockwise from left, Isabel Newman, Lorri Harrison, Cedric Savery, Betty Hairston, Pastor Bill Randolph, Bernice Kirk and Anisha Savery. (Photo By Diane Chiddister)

The First Baptist Church isn’t the largest church around. But its members believe their church is outsize in the ways that really matter.

“We’re not the biggest church in the world, but we have the biggest heart,” Pastor Bill Randolph said last week.

That heart has been beating for more than a century and a half. This Sunday, May 20, the church will celebrate its 155th anniversary with a special speaker, Dr. Clarence Bunch of the First Zion Baptist Church in Jamestown. The service begins at 10:45 a.m. at the church’s 600 Dayton St. home. Refreshments will be served following the service, and everyone is welcome.

“We’re excited to celebrate 155 years of God’s faithfulness to us,” Pastor Randolph said. “We’re excited about what God has done in the past, what he’s presently doing and his plans for the future.”

In a conversation last week with several First Baptist members, the church’s big heart took center stage, as members described why they’ve been faithful to First Baptist for years, in some case decades.

“They’re my family,” said Bernice Kirk, the church’s longtime secretary and member for almost 50 years. Especially, she said, she appreciated how the church embraced her in a time of personal loss.

Betty Hairston, another longtime member, also cited the caring of church members after a painful bereavement.

“If anything happens, you can call on someone here for help,” Hairston said. “There was an awful lot of love for me when my husband died.”

Associate Pastor Cedric Savery links his allegiance to the church to his relationship with Pastor Randolph, who helped him in a time of turmoil

“He came, stood by my side,” Savery said. “He said, ‘Your character isn’t determined by how you get into trouble, but how you get out of it.’”

That caring shown by church members is the visible expression of Christian love, Randolph said.

“Everyone here at the table has experienced that love,” he said. “Sometimes we need it, sometimes God calls us to be an extension of him.”

“When I first walked in the door, everyone greeted me so warmly,” said Harrison, who joined the church two years ago said. “I wanted Bible preaching and teaching. And I do like that demonstrative praise and worship.”

The demonstrative praise was on display last Sunday, as congregants joined in with lively “Amens” during Pastor Randolph’s sermon based on the Old Testament story of Hannah, the barren wife of Elkanah. A powerful speaker, Randolph alternated between booming oratory and intense whispers as he told Hannah’s story of hope and persistence. After letting go of her bitterness, Hannah finally gave birth to a son.

The lesson of hope and persistence is one the church members know well. The First Baptist Church was founded in 1863 by members of the Conway Colony, a group of former slaves brought to Yellow Springs by Moncure Conway, the son of a Virginia slaveowner who sought freedom for his slaves. The group is thought to have chosen Yellow Springs due to the abolitionist reputation of Horace Mann, the first president of Antioch College.

According to church history, those early Baptists raised money to purchase their first church by “selling food off their own tables, in addition to the sale of hogs, chicken corn and the like.” That first building, now a historic home on Center College Street, was later replaced by the church’s longtime site on Xenia Avenue. And 20 years ago, the congregation moved to its new building on Dayton Street.

First Baptist is a traditional, Bible-centered church, Randolph made clear.

“The authority of Scripture is paramount,” he said. “Just as in my house growing up my dad’s word was law, in the church it’s God’s word.”

But that Bible-centered theology doesn’t mean that some are turned away, according to Savery.

“We’re going to love you anyway, even if your life doesn’t live up to church teachings,” he said. “We’re not judgmental.”

As a historic black church, First Baptist members take seriously their ministry not just with each other, but with the community as a whole. Pastor Randolph is a member of the Justice System Task Force, a group studying ways to improve the local justice system. Several congregants are members of The 365 Project, which engages villagers in conversations and educational efforts around local black history and racial justice. The church is taking part in a new outreach effort to prisoners, and holds a monthly church service at Friends Care Community. A fund-raising activity last fall raised enough money to stuff 50 backpacks with school supplies for local children. And the church’s Missionary Society contributes to a host of efforts, including providing diapers to local women’s shelters, and knitting mittens and hats for children in need.

“The hallmark of the African American Church is not just Sunday worship,” Randolph said. “We’re involved.”

Along with community efforts, the little church — about 20 people regularly attend Sunday services, Randolph said — also offers a host of other church activities. Bible study takes place twice on Wednesday, at noon and 7 p.m. Member Cathy Hill runs the Awana group, meeting regularly with local young people. New to the church is a young people’s flag ministry, which will give its debut performance at this Sunday’s service. Randolph is also working to build up a Men’s Ministry, to focus on the family and society responsibilities of church men.

All of this activity reflects the high level of commitment that First Baptist members feel, according to those interviewed. In fact, from the get-go the church expects its new members to be engaged in more than just the Sunday service.

“We ask our new members, ‘Where will you be serving?’” Randolph said. “It makes no sense to join and not be a dynamic part of the church.”

Like almost all other mainstream American churches, the First Baptist Church faces challenges. Membership has dropped in recent decades, and current members are mainly older. While the church wants to reach out to millennials, young people have different needs and expectations than did church members previously, Randolph said.

Still, the church makes an effort to meet the needs of a new, younger audience by maintaining a web page and social media presence, overseen by Savery. While only about 20 people showed up at a recent Sunday worship, that same day, more than 500 people visited the church’s website, he said.

While the First Baptist Church continues reaching out to potential new members, growing the numbers is not his first priority, according to Randolph. Rather, he’s after spiritual growth.

“I’m not looking for growth in numbers,” he said. “More important is growth in our understanding of our relationship with God.”

The church has stood strong for 155 years, and First Baptist members see no reason why they won’t continue being a vibrant part of the community for another century and a half.

“God gave us this corner so we can reach out into the community,” Randolph said of the church’s Dayton and King Street site. “Whether you’re coming into town or going out of it, you can’t miss us.”