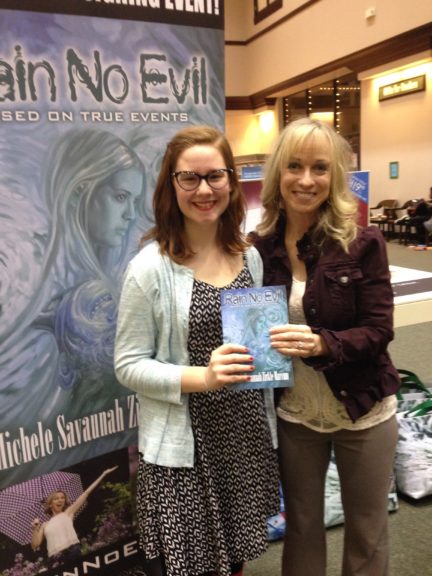 Author Michele Zirkle, right, with a reader at a recent book signing. (Submitted)

For several weeks in 2006, water started spraying in Michele Zirkle’s West Virginia home, seemingly out of nowhere. It would spray like a hose, shooting across the room and dripping down the walls. Contractors, plumbers and building experts were baffled as they couldn’t not track down the source. Other strange things started happening too, like hands pressing through walls, eyes floating in mid-air and a demon face appearing in the mirror. Zirkle eventually discovered what she believes was the source of the mysterious occurrences — an evil spirit.

Michelle Zirkle of Charleston, West Va., will speak at the Spirited Goat Coffeehouse, 118 Dayton St., on Saturday, May 12, at 1 p.m. on her paranormal water experiences and the transformation of her life and relationships that followed. Author of “Rain No Evil,” a novel based upon the her water haunting, Zirkle is in town to promote her book, which is available at Epic Books in Yellow Springs.

Looking back at the haunting, Zirkle believes she accidentally called in the evil spirit while praying the shower, which explains the water-themed poltergeist activity, she said in an interview this week.

“The water was a portal,” Zirkle said.

In an abusive relationship and desperate for change, Zirkle asked for help and received it by the way of a paranormal experience that took her on a journey of healing.

“I didn’t realize that I had that much power,” Zirkle said of the prayer that beckoned a demon from another realm. “I didn’t intend It. But I do believe that it was a spirit. It was demonic, evil, negative force, called in by me.”

Skeptics were converted when they came to the house, as between 50 and 70 people witnesses the eerie water raining from the ceiling and moisture hanging in the air, according to Zirkle. Eventually, a Catholic priest was able to exorcise the demon, she said. Even though the few weeks of living in a haunted house took a terrifying toll on her life, she doesn’t regret calling in the spirit, she said.

“I’m very glad I did make that prayer, because had a not, then I wouldn’t have gone through this change,” she said.

Zirkle went on to realize she was in a verbally-abusive relationship, a situation that she now believes was feeding the negative spirit. And whereas before she “did not love and respect” herself, she finally gained the strength to leave her marriage. She has since become an energy healer and life coach to help others with their relationship issues.

“That’s why I wrote the book,” Zirkle said of helping others.  “It’s not to say I had a paranormal experience.”

In the end, the experience of channeling an extra-dimensional entity was actually empowering, said Zirkle, who suffered from anxiety and low self-esteem prior to her haunting. She helps others connect to their own power and faith, which she said more important than spiritual tools like sage and crystals. And she can now clear places of negative spirits similar to the one she believes haunted her home, she said.

“My power and the power that I have through the divine that is in me and a part of me, that is what I call in,” Zirkle said. “Now I know that I am able to do that.”

For more information, or to listen to her Zirkle’s podcast on hidden realms, time travel, animal totems, synchronicity and other esoteric topics, visit: http://rainnoevil.com/