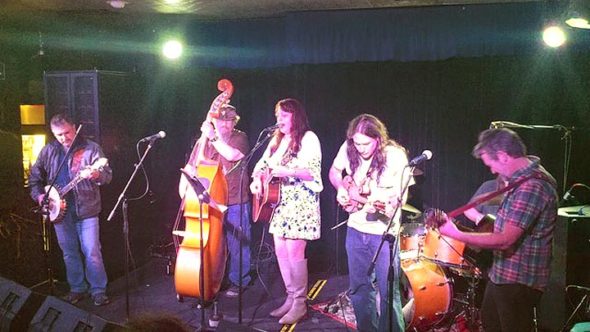 On Friday, May 4, Peach’s Bar and Grill hosted its signature band for the first time in seven years. In fact, the band, Paul’s Apartment, which is beloved and remembered fondly by many in Yellow Springs, was the first band ever to play at Peach’s, which used to be a drive-thru liquor store. Because of the band’s history there, the bar made special arrangements for it to play that night, even with such short notice.

Years ago Paul’s Apartment was credited with getting the Yellow Springs music scene going again, according to several local musicians, which is why they have been missed.

“I’ve played with a lot of musicians,” said Donna Lynn Browne (née Moser), a food safety microbiologist and the lead vocalist. “But none are like the boys in Paul’s Apartment.”

Back in the day, which was about 15 years ago, the band used to play three gigs a weekend in Ohio and Indiana. They even had two songs that made it on to radio play-list rotations at 19 different stations, including “Tasty Freeze,” which is their signature song, a reference to the ice cream shop that formerly occupied the Corner Cone location.

The band was most active from 2001 to about 2007, after which it tapered off with the illness of one member, and then the eventual break-up, with two other members moving out of state. Browne, who had been deeply grieving since the death of her son in 2016, had not been involved with music for a while because of the emotional impact. But then she visited the Springs from her home state of California a month ago and listened to the music of Tim Callahan, a local psychologist and the lead guitarist.

“It smoked!” she said. Then she thought, “We’ve got to get everyone back together!”

Returning to music has been healing therapy.

“Good for the soul,” she said.

Browne has tried to play with musicians back home, “But they are not these guys,” she said. Browne returned this week with her husband, Phillip, who was very excited about the band playing again as he danced across the floor. Brian Kelley, a construction worker who plays banjo for the band, came over from Colorado for “a long weekend” just to play.

“Yellow Springs rocks!” he exclaimed. He concurred with Browne, “Musicians are just not the same out there.” Callahan and Browne complement each other, they said, with his “dark psycho” side, which is a contrast to her “sexy romantic” side, they explained.

“Gotta have the bitter with the sweet,” added Callahan.

Greg “Duke” Dewey is the drummer of Woodstock fame, who has played in classic bands such as Country Joe and the Fish, Bodacious, and Mad River. Neil Thompson, an industrial engineer and the bassist, suffered from a benign yet dangerous brain tumor in 2006 but has since overcome it, though narrowly beating the odds.

Oliver Simons, a roofer recently released after a period of incarceration, was the band’s mandolin player for a time and rejoined them for the reunion gig.

“Great thing to get back together with these people,” he said. “Haven’t seen them in years!”

So the band in general is feeling like they are on the mend and ready to play together again.

As the story goes, in the early 2000’s, Browne, who is a graduate of Berkeley College and California Polytechnic University, moved to Yellow Springs from Santa Cruz, Calif., as her company, Dole, transferred her to its facility in Springfield. A musician and singer since she was 12, she was doing solo gigs around the village. Browne attended jam sessions at the apartment of Paul Kadis above the Emporium, who lived next door to Thompson. They consider Kadis to be their “patron saint and cult leader.” Since she had been informally jamming with the musicians, a light bulb went on in her head and she asked them to join her in a more formal way as a band. They all agreed the chemistry was good and it seemed like everything had fallen perfectly into place except for the drummer. Dewey had previously expressed interest in playing for Browne when she was performing alongside him at a 4th of July event in town as a solo act, so she called him right away, and the band was complete.

One evening as they all walked into Canal Street Tavern in Dayton, Callahan’s wife, Kelly, shouted, “Hey, look! There’s Paul’s Apartment!” and thence they were dubbed. The way that it all clicked together for them was like a miracle that was meant to be, Browne said.

On that Friday evening at Peach’s, all that chemistry came back as if it had never left. Band members played as if they had never broken up, not missing a beat. There was a fervent presence about the band members on stage, as they were back in their element. The miracle and the magic of how they first got together had returned.

“I had forgotten how fun and easy it was to play with these guys,” said Callahan. “The chemistry was as intimate and as fresh as ever. Having all our friends there really made for a great night,” he said. “I felt like playing all night. Proud to play with them again.”

Though Browne is mainly the lead singer, she and Callahan took turns singing lead on some of the songs- — she with her sultry timbre and he with his intense wailing. In kind, each instrumentalist also took turns on solos. Most are familiar with the term “folk rock,” but this group takes that genre and turns it on its head to perform something that would better be described as “rock folk,” playing bluesy rock tinged with rockabilly and country, but uncharacteristically using acoustic folk instruments that are not usually employed for such a musical fusion, giving them their own unique sound.

The crowd, which was not sparse but more than modest, was enthusiastic with lots of positive energy. It gave one the feeling of being right at home.

Browne wrote most of the lyrics, especially on the songs that she sings lead. Callahan wrote the lyrics on the songs that he leads. Browne would sometimes bring in a melody that the guys would flesh out with filler material. Thompson and Kelley would often come up with melodies that Browne would write words to. In backyard jam sessions, especially for the second album, Callahan and Simons would come up with leads and chord progressions.

The group has released two albums, the first one self-titled “Paul’s Apartment” and the second one titled “Utilities Included.” For more information, you can find them on the web at http://www.paulsapartment.com.

“There is no place like Yellow Springs and the wonderful people who live here,” said Browne. “I’ll be back.”

The author is a local writer and musician.