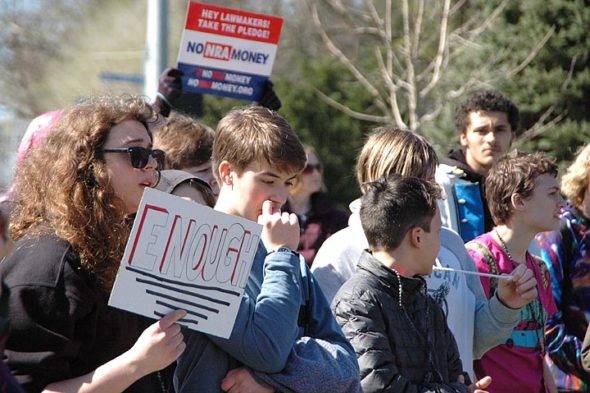 Local students gathered downtown for a rally last Friday, April 20, to commemorate the 19th anniversary of a school shooting at Columbine High School. Pictured are, from left, Mason Lindsey, JJ Bledsoe, Ellery Bledsoe and Mark Bricker (at rear). Students walked out of Yellow Springs High School/McKinney Middle School and marched downtown to express their support for stricter gun control measures and to urge the government to do more to improve school safety. (Photo by Megan Bachman)

Kayla Graham and Matt Minde contributed to this story.

“Arms are for hugging.”

“Protect our safety, not guns.”

The signs carried by local middle and high school students at a walkout, march and rally in downtown Yellow Springs last Friday carried a strong and clear message — their lives are more valuable than unlimited gun rights and they will continue to speak out until gun laws change.

“Our government is afraid to do something but we shouldn’t have to be afraid to be shot,” one student said at the rally, to the applause of her peers.

It was the second walkout organized by local students in two months. The actions come after 17 were killed in a school shooting at Marjory Stoneman Douglas High School in Parkland, Fla. in February, sparking a national youth movement to end gun violence.

The April 20 walkout was scheduled to coincide with the 19th anniversary of a mass shooting at Columbine High School in Littleton, Colo. According to a Reuters report, an estimated 2,600 schools participated in last Friday’s walkout.

At precisely 10 a.m. some 70 local students, estimated at about one-third of the student body, walked out of their classes, marched across town, through the Antioch campus and then downtown. As they marched closer to the heart of downtown students were met enthusiastically by beeping cars, which the students echoed with whooping and proudly raising their signs. Chants from the students rang out: “NRA, go away!” and “No more fear, it ends here!”

Then, after being waved across Xenia Avenue by Yellow Springs Police Chief Brian Carlson clad in plain clothes (the only police presence at the event) they gathered in front of Jackson Lytle & Lewis Funeral Home and a small group of villagers began to assemble around them.

Student organizers took turns atop a soap box with the words “We the People Demand Safe Schools” and read the names of those injured or killed in school shootings since April 20, 1999, intermixed with their own passionate speeches. They also led the crowd in 14 seconds of silence, 13 seconds for the 12 students and one teacher killed at Columbine in 1999 and one second for a student that was injured in a school shooting earlier in the day near Ocala, Fla.

One student shared the sobering statistics of mass shootings, including the figure that since 2013 the rate at which someone is killed by a mass shooting is three people every two days.

“None of them deserved it. None,” they said.

In interviews with students during the march, a major theme was wanting to feel safe in school and be able to further their education without fear of a school shooting.

Alaina Hoff, a senior, said she was “tired of students’ lives being on the back burner to political issues.” But she felt validated by the involvement of her peers.

“I am proud of the students all fighting for a cause,” Hoff said.

Senior Lucas Mulhall believes in the importance of solidarity in support of the movement.

“There has been a lot of tragedy and I would be remiss if I didn’t take action,” Mulhall said. Senior Grant Crawford also  wanted to show solidarity.

“It’s all about solitary and support and not just for the national movement, but for my friends,” Crawford said.

Crawford said his generation is not just up against ineffectual politics-as-usual. Instead in the current political climate, “it’s like we’re actively being pushed back,” he said.

“We have to fight harder for it,” Crawford said of progress.

Josephine Zinger and Sophie Clouse-Taylor, both seventh graders, said they were marching to end gun violence and to push for more strict gun regulations. They both expressed the need to be able to go to school to focus on education and not have fear of guns as a distraction to that.

“No more war weapons in schools made to murder,” Zinger said.

Eighth-grader Malaya Booth said she was, in part, protesting the National Rifle Association, which “protects the guns not the kids.” When asked if she feels safe at school, she responded that while she feels mostly comfortable, the recent school shooting in Florida was so “devastating” that it has given her pause.

“There is this little fear in your heart,” Booth said. “It could happen to anyone. It’s really scary.”

But the current wave of activism at YSHS/McKinney has been empowering, Booth said, and she feels like the larger community of Yellow Springs is listening.

“In Yellow Springs it’s a prominent thing to speak our minds, even though we are kids,” Booth said.

Raine Galvin, a senior, said one reason she walked out was to protest the NRA, which she said “doesn’t care about kids.” She said she supports stricter gun control measures, including raising the minimum age to purchase firearms to 21 and banning civilians from owning military-grade weapons.

Galvin also wanted the student walkout to send a message to a society that has become desensitized to mass shootings.

“This shouldn’t be considered normal,” Galvin said, “and we want to put an end to it.”

Several students also said they appreciated the support that the administration gave to their protest. In an email to parents on April 18, the district noted the safety and liability concerns of the protest being held off-campus during the school day, when teachers and administrators would be obligated to stay in the building and continue teaching. But the district offered the opportunity for parents to sign their children out in the days leading up to the event, a process that several students noted was easy.

As students began their march downtown, YSHS/McKinney Interim Principal Jack Hatert, who stayed at school, praised the students for their leadership and for exercising their voices on an issue that he said is, ultimately, about supporting a safe environment at their school. The walkout was a learning opportunity, he added.

“I think what kids are learning here today is as rich or more rich than what they will learn in the classroom,” Hatert said.

Hatert was especially impressed that most of the organizers were eighth graders. 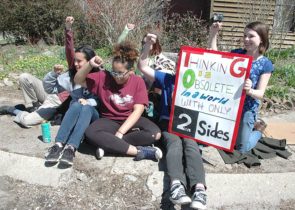 A handful of students last Friday mounted a protest against the protest, of sorts, and sat across from the school. The group was dismayed because they felt the pressure to choose sides — to either march or stay behind in school —didn’t “foster critical thinking,” according to Delia, an eighth-grader who preferred to go by only her first name, and chief organizer of the action. (Photo by Matt Minde)

Later in the day a counter protest took place across the street from YSHS/McKinney. The six to eight kids who held the counter protest were not necessarily for gun rights, but were protesting the binary nature of the protest itself. They felt the choice was to go with the protesters or stay in, and they were dismayed because they felt there were no attempts at discourse.

“There was pressure to choose sides, and that doesn’t foster critical thinking. We disagree with that binary choice,” said Delia, an eighth-grader who preferred to go by only her first name, and chief organizer of the action.

“It’s about having your own opinion,” said Rosemary Barret, also in eighth grade.

When asked whether other students were aware of their stance, Delia said she didn’t think so. “But it’s about trying not to judge based on whether [students] walked or not,” she said, referring to the march downtown.

“Two camps can reinforce differences; people can become entrenched,” said Delia. “It’s a continuum, there are lots of ideas and possible opinions.”

The group was invited to march with the others, but declined, preferring instead to protest across the street from the high school. One held a sign that read, “Thinking is obsolete in a world with only 2 sides.”

Eighth-grader Camryn Strolger pointed out the protest was about school safety, and that the school would have no means of protecting students after they left the campus.

Delia added to the point: they were “protesting to show schools weren’t safe; the protest was about schools,” that being downtown didn’t send that message. “That’s why we sat across from the school,” she said.

Kayla Graham is a YSHS graduate and a local writer. Matt Minde is a designer and co-owner of the News.