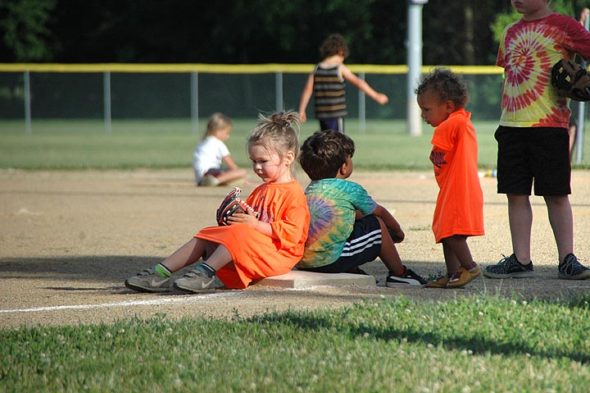 Base camp: From left, T-ball players Silas Lee, Luke Miller and Imogene Cowperthwaite take a break from Friday night’s action. The Perry league meets at Gaunt Park every Friday night from 6:30 to 8 p.m. through the beginning of August. (Photos by Megan Bachman)

Five-year-old Zander Breza’s grandfather, Michael Breza, said he liked our last article and appreciated what we do with this Perry League program. We thanked him, but he said there was one shortcoming: we had not mentioned Zander. Well, that human rocket, roadrunner, and super energetic boy flying all over the field chasing every ball wherever it went gets his notice today. Hello, Zander Pacheco Breza!

Lily Miller, 10, a quiet, dependable, responsible, beautiful blonde, threw balls out to our kids after the kid at bat had hit his or her ball off the tee. Halfway through the 90-minute evening, she began bringing me a ball or two at the home plate, a lovely and important consideration that I appreciated because I needed the balls, but mostly because she was so sweetly supportive, so thoughtful, always smiling, her eyes shining.

Luke Miller, 4, is one of those very interesting, quite nicely complicated, ever-enthusiastic ball players. He is at the tee.  He’s swung and missed and is maneuvering about the tee, trying to line himself up to take another swing, I think, but suddenly he says, “Footprint!” He is excited.  I look at his feet. He stomps his right foot, then lifts it again. saying, “Footprint!” I see his footprint. You can make out the design of the material on the bottom of his shoe. The imprint in the dirt is quite surprisingly clear. “Yes,” I say, “I see it.”  Then he leaps and stomps both feet in the dirt. “Footprints!” he exclaims, and we’re both excited by the two very distinct footprints in the dirt there.

Erin Fink, 6, is back – she came last week but we got rained out (or “lightning-ed out”). She is her usual animated, smiling, happy self, her throwing, fielding, and running skills top-of-the-line once again. Erin is one of our naturally, awesomely talented athletes. And she is as kind and sweet as she is athletic.

Sophia “Hot Dog” Anderson, 9, wants to help out as a kid coach. She’s smart and sophisticated (I’ve watched her shepherd her two little five-year-old brothers, Pierce and Ronan — she was fiercely attentive like a mother lioness protecting her cubs), so we try her at second base, but there is a dad-coach, Zac Craig, already there. Sophia’s little brother, Pierce, 5, is here with his usual level of unbelievable energy. He’s popping about like Rocket Cowperthwaite, 6, who is a great athlete, who cannot stand still, who is running, racing, chasing Elliot Shirey, 6, wrestling, jumping, hopping, dashing, singing out with glee. In this program of miracles and things-not-to-be-believed, the explosive, non-stop, joyful dashing and crashing and flying about of these children is a wonder. An inspiring natural phenomenon, a privilege to behold.

Natalia Ramirez, 6, is another incessant fount of energy and activity. She catches and fields all night, scooping up a minimum of two balls a minute, grabbing both balls hit by a kid at the tee and from balls thrown out by Mark Breza and Lily Miller along the first base line. That is two balls scooped up every minute for seventy, seventy-five minutes! What’s that? A hundred forty? A hundred fifty balls? And when it is time to call it a night, Natalia is ready for more!

There’s more. There is always more.  Thomas Stratton, 5, hits and runs and hits (and is still as handsome as Clark Gable).  His little brother, Oscar Stratton, 3, hits and runs and hits and runs and hits and runs some more. Nolan Hange, 4, remembers the previous t-ball coach who he says was younger than me. Nolan is so serious and adamant, I believe him, even if the last program coordinator retired 33 years ago. Paige Clark, 8, is one of our many Perry League beauties, and she plays ball like the polished veteran she is. Her brother Levi, 6, is a swift, agile, hard-running, hard-hitting ball player. Clay Husk, 5, a quiet and steady boy, hits, hits, hits, and runs, runs, runs. Quinn Brandenburg, 6, is so happy and jolly and full of joy you might wonder what’s in the water coming out of our Gaunt Park water fountain. He laughs and leaps and, beaming ear to ear, he hits a couple home runs.  Austin Simpkins, 6, is a home run hitter, too. Careful, thoughtful, and laid back, he surprises with how fast he gets around the bases.  A joy to behold.

And that’s our Perry League, Yellow Springs’ all volunteer, 10-week t-ball program for girls and boys, 2–9 years of age.  It’s the village’s non-competitive, beginner’s baseball program for all our community’s children regardless of their race, color, creed, sexual orientation, ethnicity, spiritual inclination or practice, ability or disability.  We will be at Gaunt Park every Friday night from 6:30 to 8 p.m. Children can begin to play at any time and there’s no requirement to come every week — come when you like, come when you can. We’ll be out there for the next seven Friday nights trying to hit the ball, catch the ball, throw the ball, and have ourselves a merry old time. Why don’t you come join us? To play. To watch. Or to just be with us. We’d love it, we really would.