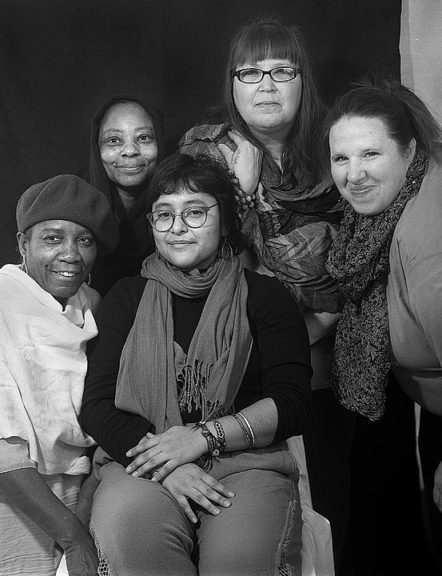 Photographer and recent Antioch College graduate Odette Chavez-Mayo (center) posed with the imprisoned women who sat for the portraits in her exhibit, “We are Enough: Women of Dayton Correctional Institute.” From left to right are DeRynda, Sista, Aurora and Serenity, pseudonyms chosen by the women, since their real names were not permitted to be used in the exhibit. “We are Enough,” which is showing at the Emporium, runs through August 5. (Submitted photo by Odette Chavez-Mayo)

How does a person keep their will to live when their whole future is in the same place? Recent Antioch College graduate Odette Chavez-Mayo could only answer that question after she spent time with people who found their own answers — women serving life sentences in the Dayton Correctional Institute. In those women, she found people who were acknowledging their pasts and building their futures.

Chavez-Mayo’s portraits of women serving life sentences, “We are Enough: Portraits from Dayton Correctional Institute,” runs through August 5 at the Emporium (in Yellow Springs, 233 Xenia Ave.).

When former Antioch professor Emily Steinmetz invited Chavez-Mayo to visit the “States of Incarceration” exhibit at the Herndon Gallery, she met women who wanted to share their stories in a way that wouldn’t reduce them to statistics. Chavez-Mayo immediately agreed to take their portraits.

As a woman of color, Chavez-Mayo said in a recent interview, she has struggled to find artists who could serve as role models. Women of color are often socialized to believe they don’t deserve visibility at all, she added.

“A large part of my art is finding out why I deserve to make art and what it means to me,” Chavez-Mayo said. “My ultimate goal is to use my talents and what I love to do to make a place for myself and other people like me.”

Another exhibit also dedicated to giving marginalized women increased visibility is running concurrently at the Emporium. Aimee Wissman’s exhibit of oil paintings, “They Will Shoot Her Too,” running through August 1, shows women who have suffered as a result of police brutality. 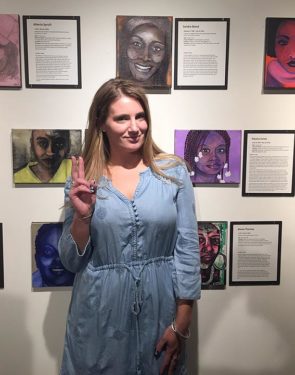 Artist Aimee Wissman stood before the paintings from her exhibit, “They Will Shoot Her Too,” a collection of portraits of women victims of police violence. The exhibit is showing at the Emporium through Aug. 1. (Submitted photo by Odette Chavez-Mayo)

Wissman had to start breaking rules as soon as she knew she wanted to become an artist. She was serving a five-year sentence at the time; she says she started making art as a form of meditation, or to keep from going crazy. As stories of police brutality increasingly received news coverage, Wissman was angry that police brutality against women was seldom discussed. Women’s deaths were as marginalized as their lives. She wanted to use photography to illuminate the lives of women who were victims of police violence. Since access to information is strictly limited during incarceration, Wissman relied on friends to smuggle in 2-inch by 2-inch clips about victims.

Wissman intended for the exhibit to be larger, but she had to shorten the project when it became too emotionally numbing, she said in a recent interview.

“You really are breaking someone down taking portraits,” she said.

When Wissman started exhibiting the work,  she saw that her art could have a sociopolitical impact as well as an emotional one. Her exhibit has been shown at Wright State University and the Herndon Gallery at Antioch College. Audiences have asked to buy her portraits, but she always refuses them.

“It doesn’t seem right to have someone else’s death in your living room,” she said.

Wissman’s next project is a series of portraits of women who are serving life sentences for murdering their abusive partners. She wants to draw attention to Ohio’s lack of self-defense laws. All prisoners deserve to be viewed as contributing members of their communities, she said.

“Prison isn’t punishment enough. You get out, and it’s like you’re in prison forever. It’s very much a scarlet A.”

Looking in the mirror

Chavez-Mayo’s use of analog rather than digital techniques presented challenges, but was done intentionally. During her time at Antioch, she learned how to develop her own film in a dark room. A 4×5 camera requires the photographer to work meticulously under considerable restrictions. Chavez-Mayo has to measure the light in a setting, and she can only take one photo at a time. She said that without the help of Antioch adjunct professor, James Luckett, she might not have learned the skills she needed quickly enough. However, she was sure this was the right medium for telling these women’s stories.

“It was important to me for these people to know they were important,” she said.

Chavez-Mayo only had two photo sessions of two hours each in the institution’s visiting room with her subjects. Restrictions that could have been overwhelming only strengthened the emotional bonds the women had formed as a result of this project. Laughing while they helped each other dress and pose, the women showed the same joyful curiosity Chavez-Mayo noticed when she first met them. Since mirrors usually aren’t allowed in the correctional institute, this was one of the few times the women were able to see themselves and craft their own self-images. Chavez-Mayo may still struggle with the question of whether or not she deserves visibility, but now she knows what she wants to use her visibility to do.

“I really do believe that all humans are worthy of dignity. I see it as a lifelong mission to use my art [to show] that,” she said.

Wissman hopes her primary job will be working as an artist, and she knows exactly what that job description means to her. Now that she has found her own voice, she wants to be a spokesperson for women who are still incarcerated. Becoming incarcerated, she said, is equivalent to being silenced. Through her activism, she hopes to make sure that silencing never happens to anyone.

Wissman supports prison abolition. Twenty percent of Ohio’s budget is allocated to maintaining prisons, she said, and she would like to see that money instead used to support America’s humanist values. Perhaps activism on behalf of those who are incarcerated will make it harder for Wissman to deny her own past. She understands the risk, and she’s willing to take it.

“It’s worth it to be vulnerable so someone can connect with the humanity in you,” she said.

A visual artist communicates without using words. Perhaps that silence, and the thoughts that creep into it, allows her audience to find a perspective other than its own, Wissman said. In order to most effectively fight for social justice, we have to think of people other than ourselves, she added. Since she vividly remembers her own experiences of marginalization, Wissman is sometimes frustrated at the lack of compassion she sees in the world around her.

“We’re so ready to see ourselves as separate instead of interconnected,” she said. “There [has] never been a more critical time to be an artist.”

* The author is a writer, performer and Antioch College alumna who lives in Huber Heights. She can be reached at TWorpp@aol.com.