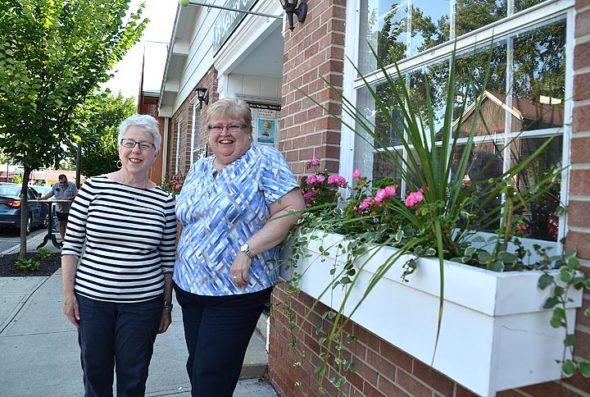 The 18-month-long Dementia Friendly Yellow Springs project is organizing several activities for September, World Alzheimer’s Month. Two of its organizers are, from left, Toni Dosik, and Karen Wolford of the Yellow Springs Senior Center. Not pictured are organizers Kate LeVesconte and Karen Puterbaugh of the Greene County Council on Aging. (Photo by Megan Bachman)

In September, a focus on dementia

When organizers for the Dementia Friendly Yellow Springs, or DFYS, project held a community book read last winter on a book about dementia, they were encouraged by the hardy response. About 40 villagers showed up to discuss the book, which most had read after taking it out of the library, and people engaged in a lively discussion.

“There seemed to be an active interest in this timely topic,” said Yellow Springs Senior Center Director Karen Wolford, one of the organizers. “There was evidence that people wanted more.”

Villagers are getting more in September, which is World Alzheimer’s Month, when DFYS organizers offer a series of events focused on dementia.

On Tuesday, Sept. 11, at 6:30 p.m., a second community read focused on the book “In Pursuit of Memory: The Fight Against Alzheimer’s,” will culminate in a discussion at the Yellow Springs Library on the topic of dementia.

On Sunday, Sept. 23, a talk and training for anyone interested in knowing more about dementia will be held at the First Methodist Church following the 10:30 a.m. service. The event will be presented by Greene County Council of Aging Executive Director Karen Puterbaugh.

And at 7 p.m. on Sunday, Sept. 30, the Little Art Theater, also in collaboration with DFYS, will show “The Genius of Marion,” a documentary about the Alzheimer’s of the filmmaker’s mother, and the family’s struggle to adapt to it.  The event is free and open to the public.

All of these events are a part of the 18-month-long Dementia Friendly Yellow Springs project, in which organizers seek to make this community more sensitive and welcoming to those with dementia-related diseases.

The topic of dementia is relevant to everyone in this country, where one in 10 people over the age of 65 have Alzheimer’s or a dementia-related disease. However, it is especially pertinent in Yellow Springs, where the average age is 51 and more than 20 percent of villagers are over age 65.

“There’s a larger message from my perspective,” she said in a recent interview.  “The best thing we can do with those with dementia is to be caring, compassionate and patient. It means smiling, listening in a focused way, making eye contact, being present with someone. I believe it teaches us not only how to interact with those with dementia, but how to interact with everyone.”

For the Sept. 11 community read, the focus is on a book with a different approach from the community read last year. That book, “Memory’s Last Breath,” told the story of one person with dementia as the disease worsened and the writer prepared for death, according to Wolford. However, this time around the event focuses on “In Pursuit of Memory: The Fight Against Alzheimer’s,” by Joseph Jebelli, which offers a mix of both personal stories and research on Alzheimer’s, with a focus on living with the disease rather than preparing for death.

Organizers recognized that many in Yellow Springs are living with Alzheimer’s, and thus there is more interest in how to live with it, and relate to others who are doing so, rather than how to prepare for the final stage of life, Wolford said. And this book also offers something for the research-oriented perspective of many in this highly educated town.

“We have such an intellectual town,” she said, and the group wanted the book to appeal to villagers’ interest in learning.

The library now has 20 copies of the book on hand for borrowing.

For the Sept. 23 presentation at the First Methodist Church, Puterbaugh will offer something similar to what she’s already presented seven times in the village, during trainings on how best to interact with those with memory loss. Through the grant, she has worked with local first-responders, such as police and emergency rescue workers, along with members of the Village staff and the local library and employees of downtown businesses who frequently interact with those with Alzheimer’s.

“The training helps us be more caring and compassionate,” Puterbaugh said. “We live in a fast-paced society, and this helps us slow down.”

And while those with dementia or Alzheimer’s have special needs, the training relates to many in a community like Yellow Springs, where the high rate of aging people means that many villagers are struggling with the losses that come with aging.

“As we age, we’re faced with losses on a regular basis, and it’s easy to isolate ourselves,” Puterbaugh said. “We need to be reaching out to everyone.”

On Sept. 30, “The Genius of Marion,” offers an intimate portrayal of a family dealing with dementia. The film was made by Banker White, who focuses on his mother’s struggle with increasing dementia.

“My goal was to create a film that finds light and beauty in a place often shrouded in shame and confusion,” he wrote. “The Genius of Marion” is a reminder that we often don’t talk about the really important things until we’re in the middle of a tragedy, but you don’t have to wait. Alzheimer’s gives you the unique gift of time with someone you know you are going to lose. I hope our film will inspire people to connect on an intimate level with everyone they love.”

Dementia Friendly Yellow Springs is a project of the Yellow Springs Senior Center with funding from the Yellow Springs Community Foundation and The Dayton Foundation and support from the Greene County Council on Aging. It is an 18-month long project headed by part-time organizers LeVesconte and Toni Dosik, with support from Wolford and Puterbaugh, that has so far focused on training for those who come into contact with villagers with memory loss, and a heightening of awareness for all in the community. Future efforts will include support groups for caregivers for those with dementia, to take place on the first Tuesdays of October, November and December at the First Methodist Church.

For more information on the upcoming Community Read, contact the Yellow Springs Library at 767-7661.