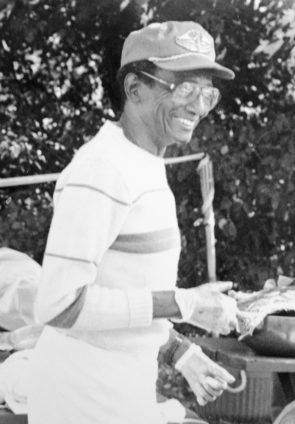 He fed people’s children. He fed those without money. He fed human rights organizers. He fed members of a diverse social club.

Whether from his home on South Stafford Street, his downtown restaurant, a Clifton speakeasy, or any number of gatherings, “Gabby” Mason fed people.

And though it was his legendary barbecue that filled their bellies, it was his kindness that fed their spirits. Decades later, Gabby is remembered as much for his generosity as his cooking.

“Everybody loved him and he loved everybody,” recalled Neal Crandall, who knew Gabby in the 1980s.

“He was very humble and unassuming — he exuded love,” said Sam Eckenrode, whose first experiences with Gabby came as a teen in the 1960s.

Gabby even had a catchphrase that exemplified his kindness: “It’s nice to be nice. Try it!”

For the third time, Yellow Springs will celebrate Gabby Day in honor of the late Ellie “Gabby” Mason, who died in 1996 at age 72.

Organized by several generations of villagers who knew — and loved —him, Gabby Day is Saturday, Aug. 4, from 2 to 6 p.m. at the John Bryan Center, 100 Dayton St. There will be food, games for kids, a bouncy house, a beer tent, DJs — and, of course, plenty of barbecue.

In the style of a family picnic, seating will be both on the lawn (bring your own blanket and chairs) or inside the gym. There will also be an open mic to share Gabby stories and other recollections.

Carmen Lee, one of the lead organizers of the event, said she wanted to revive Gabby Day because of both anxieties in the nation and in the village. The sense of community that Gabby embodied is needed now more than ever, she said.

“There seems to be a need, especially in these times, for community and community-building,” Lee said.

“We don’t know our neighbors anymore,” she went on. “That’s like any other place — you can get that in Kettering or Springfield or Xenia. But I’m not satisfied with that happening here.”

A new generation of villagers can learn from Gabby’s example, especially as Yellow Springs becomes less diverse and tolerant than it once was, Lee added.

Eckenrode is also frustrated that the town is less diverse, open, welcoming and friendly than it once was. While she thought that the diverse and inclusive community of the ‘60s and ‘70s was normal, she later realized it was a “rare pocket of delightfulness in this village.” It can be turned around, but it takes effort, and a nod to exceptional forebears like Gabby, she said.

“It doesn’t just happen magically, it takes a lot of people’s will and psychic energy and physical people, and without people like Gabby to show us the way, it doesn’t happen.”
Cooking for the people

After moving with his family from Springfield to Yellow Springs for better educational opportunities in the 1960s, Gabby, as he came to be known, operated restaurants downtown under the name Gabby’s BBQ, but also cooked for myriad local meetings, gatherings and events. For many years he served up smoked meats, sandwiches and fried foods in the living room of his tiny South Stafford Street home, which had a painted wood ribs sculpture mounted above the front door.

“You could just knock on the door and he would say, ‘ribs, chicken or fish?’” Eckenrode recalled. A couple decades later, Lee also remembers eating at his house, as a teen in the 1980s.

“If you were a teenager he would feed you no matter what time it was — as long as the light was on,” Lee said. And money was never a factor.

“There was never a refusal of service for anyone no matter what — ever,” she said.
Davis remembers her five-year-old son stopping by Gabby’s house on his way home from kindergarten.

“He would go over by himself and ask for French fries for a quarter,” Davis said. “He ended up with barbecue chicken and cole slaw — a whole meal.”

Villagers remember a layer of grease coating the furniture, a bed that turned into a dinner table by day, a shed out back for smoking ribs, an exotic bird in the corner, and a sign in the kitchen that read, “God is 1st. You are 2nd. I’m 3rd.”

Gabby also founded a social club in the 1970s, the Mystic Knights of Nowhere, a group whose membership of more than 100 cut across racial and class lines and who met at a Clifton property along the river.

“It was a speakeasy out in Clifton where folks from all walks of life who would not otherwise have gotten together would get together,” Crandall explained.

Gabby was also involved with H.U.M.A.N., Help Us Make a Nation, a local human rights organization that the Mystic Knights, and other local groups, participated in, feeding organizers at meetings and “floating” coffeehouses held around the village.

“I always called it the poor people’s country club,” Davis said of the coffeehouses. “It was like getting together for a church service. And Gabby would usually be cooking.”

Davis remembers Gabby as a beloved champion of the working class villagers and a model human.

“We need more people like this in the world,” she said.

Gabby was small statured with a raspy voice, but with a larger-than-life spirit, according to Donna Silvert, who bartended at the Clifton lodge in the late ‘70s.

“He was slight man with a husky voice, but he did multitudes,” she said. “I truly loved the man.”

Silvert recalls that while he loved smoking meat, as more villagers became vegetarian, he learned how to cook tempura vegetables and other options.

“He made sure people were taken care of,” Silvert said.

Gabby’s barbecue sauce may have been “world famous” but he always put people first, according to villagers interviewed this week. When asked the secret to his culinary success in 1991, Gabby told News reporter Amy Harper, “First, I enjoy people. You gotta do that to cook. That’s my life — people.”

The Mystic Knights and H.U.M.A.N.
Gabby’s role in reviving the 1950s-era social club — Mystic Knights of Nowhere — was a particularly memorable period for those interviewed this week. Jim Prether’s Clifton property on South River Road, which became known as “Prether’s Lodge,” was the requisite clubhouse.

Membership was apparently somewhat loose, with dues of either $1 per year or $5 for a lifetime, or, if you had no money, the fee was waived. Membership cards were printed up, which read “The Mystic Knights of Nowhere Social Club Ranch. Food – Drinks – Games – Music. On the back was Gabby’s motto, “It’s Nice To Be Nice — Try It.” 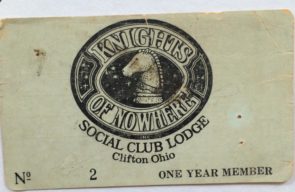 A membership card to the Mystic Knights of Nowhere, which Gabby helped found in the 1970s. (Photo from Facebook page “Gabby Day”)

“It was a really diverse, loose, welcoming social club,” said Eckenrode. “This was back in the day when Yellow Springs was still cutting-edge in terms of diversity and openness and inclusion, and I think it weirded out some of our Clifton and Cedarville neighbors.”

“The lodge was a place where black people and white people drank, ate and fished — it was pretty idyllic,” recalled Silvert, who poured libations while through a window in the bar she could see Gabby cooking outside. “As far as I see, no one was doing anyone any harm.”
A few years later, in the early ‘80s, county authorities swept in to shut down Prether’s Lodge, issuing a handful of warrants for a few of those who operated there.

“The speakeasy was not really liked by the powers that be — it was probably the most explicating organized multiracial thing in Greene County,” Crandall explained of the crackdown.

According to Silvert, who was one of those being charged, along with Gabby, of serving liquor without a liquor license and other violations, “it was ridiculous.” The county prosecutor threatened to revoke Silvert’s teaching license if she did not implicate Gabby as the ringleader as “keeper of the house.”

“All the [county prosecutor] wanted was for me to point my finger at Gabby,” Silvert said. “They knew that was garbage.”

To those interviewed this week, one word explained the reason that county authorities shut down the lodge, and the social club: racism.

“It was racism,” Silvert said. “They only wanted Gabby.”

Mike Miller said that the group’s diverse members caught the attention of authorities.
“They got busted because they were a multiracial group of people having fun and the locals didn’t like that,” he said.

By 1991, Gabby was no longer bitter, but still felt what happened was wrong, offering this insight to the News: “If it’s good, it seems, people don’t want it,” he said. “If it causes conflict, they want It.”

The newly formed H.U.M.A.N. mobilized in support of those in legal trouble, and ended up successfully getting the charges dropped. But the Mystic Knights disbanded, and an era was over. However, H.U.M.A.N., formed a few years earlier by Antioch College professor Jim Dunn, Bill Chappelle and others, was in the ascendancy. Soon, their T-shirts had Gabby’s catchphrase on the back. They collaborated with human rights organizations around the country, and brought Pete Seeger to campus for a concert in 1984, among other activities through the 1980s.

“It was a black-led anti-racist community organizing group that helped us look at personalized and external racism,” Crandall said of H.U.M.A.N. “I can’t think of anybody that exemplifies the concept of H.U.M.A.N. better than Gabby.”

As Miller, who was a part of the human rights organization, explained, “Gabby was an integral part of H.U.M.A.N. Whenever we would have a meeting or retreat, Gabby was always there feeding everyone.”

Gabby Day in YS
It was Lee’s idea to revive Gabby Day, and with co-organizer Brittany Griffith, the arrangements have been coming together smoothly, with many pitching in to donate food or help. Lee has been working on an approximation of Gabby’s famous barbecue sauce.

According to Lee, it will be the town’s third Gabby Day. The first Gabby Day was held in September 1991 at Ellis Park and was a fundraiser for Gabby for a medical procedure. On account of Gabby’s characteristic modesty, he didn’t show up, until a few revelers went to his home and convinced him.

“He wasn’t going to come — he didn’t want to be honored,” Crandall said. “The organizers had to say that he would disappoint people if he didn’t come. He came.”

A mayoral proclamation was drafted for the first Gabby Day, reading, in part, “Whereas: Gabby Mason has provided sustenance to all who need or ask, both physical and spiritual, without asking for anything in return.”

This year, Gabby will get a new proclamation from Mayor Pam Conine. But this time, rather than a one-time proclamation, he will be honored with a day of the year — Aug. 4 — to be commemorated annually.

Although Lee is unsure that Yellow Springs can return to what it once was, at least one day of the year villagers can embody Gabby’s spirit.

“We will be like that on Aug. 4. Every August 4th we’ll get our act together.”

The event is free to attend, with a suggested donation for food. For more information, visit the Gabby Day event Facebook page.