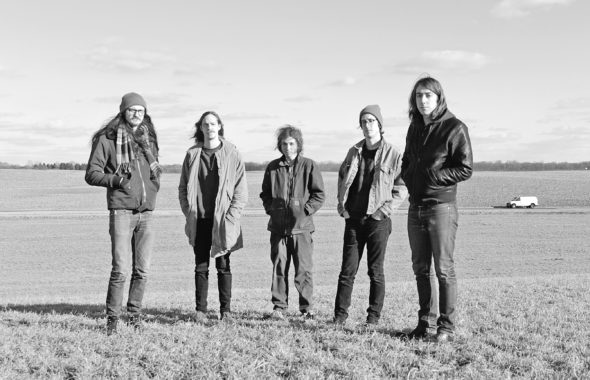 Performing locally and building a loyal following for the past seven years, Yellow Springs-based pop-rock band Speaking Suns is on the rise.

The five-piece outfit has been tapped to perform as part of the Bellwether Music Festival, scheduled Friday and Saturday, Aug. 10–11 at the Renaissance Park in Waynesville, Ohio. The local group performs at 3 p.m. Friday, sharing a stage with such national headline acts as The Flaming Lips, Echo & the Bunnymen and the Psychedelic Furs.
The band’s members attribute the group’s inclusion in the high-profile festival to their growing reputation and their recent participation with such well-known acts as Guided by Voices and Twin Peaks in the local Springsfest.

Papania, who is a newer addition to the band, is a couple of years younger than the other members of the group, all of whom graduated the same year from Yellow Springs High School.

Jacob “Jake” Diebold, the lead singer who also plays guitar, moved to town his junior year from Akron. He is mostly self-taught on guitar, beginning in middle school with only a few lessons to get him started, which is largely the case with his bandmates as well. He became good friends with Jay Teilhet, who plays guitar in the band, and Dylan Sage, who plays the bass guitar. Teilhet also improvises makeshift hand-crafted instruments that provide a variety of sounds for the group’s studio recordings.

“I just like to play music with these guys,” said Teilhet, who prefers to take a low-key supporting role in the band.

Sage and David Byrne, who plays drums, played percussion together in the high school band. Byrne’s parents played for a time with the band Swearing at Motorists, which began in Dayton in the early 1990s and went on to tour internationally.

Papania, who is soon moving to Chicago, joined the Suns ensemble almost a year ago. He was brought in on keys to reproduce some of the sounds for the live shows that Teilhet made with his homemade instruments so Teilhet could be free to play guitar on stage. Papania had played with a lot of the same people before in bands with shared members. They have all been in a couple of different formations of the band with roughly the same members since 2007, but officially formed Speaking Suns in 2011.

“I’m excited for what we have lined up and to share our new music with people. Glad to be a part of this group and making music with these guys,” Byrne said.

Group members are excited also to be performing amid a lineup of bands that were influential in their development.

Bellwether headliners The Flaming Lips, Echo & the Bunnymen and the Psychedelic Furs were each inspirations, along with alternative rockers The Smiths and The Talking Heads; classic rockers The Band, Bob Dylan and The Beatles; ‘60s R&B acts like Al Green and Otis Redding; and harder rock like Led Zeppelin; and more contemporary hip-hop.

Speaking Suns’ style is psychedelic dream pop, indie, and art rock, bordering on chamber pop, a direction in which they could easily go. Lyrically speaking, some of the major themes of their songs have been about personal growth and change, and the impermanence of things — the deep introspective and existential stuff. They have gotten somewhat sociopolitical more recently, singing about such subjects as “empty capitalism,” diversity and multiculturalism.

“Speaking Suns is a cog in the wheel of larger music things. Not for just traveling, not just for making more money — which is mainly for gas — but doing it more for experience and bringing it back to the Springs,” Sage said. “We will help book shows even for bands we’re not involved with to create a diverse multicultural music scene,” he added.

“We are increasingly aware that we are an all-white, all-male band, which presses us to be an ally of P.O.C. bands, and to channel money to organizations we believe in,” Sage went on. “Coming from privilege, we feel an obligation to be more politically active to support diversity, minorities and those less fortunate.”

In their songwriting process, Diebold comes up with most of the chords and lyrics, and everyone else fleshes them out with equal input. But each song is different in its creation, so the band members may start with a rough chord progression and words, or make a song up on the spot in a collective chemical and organic process.

“Seeing music operate in society and being able to shape and take part in music scenes around the country and seeing how it affects people is worth it,” mused Diebold. “It’s very political in the sense that it takes money, but we have this intangible thing that everything else is revolving around. I like having very diverse experiences.”

The band has chosen singles to pair with music videos they have made to help people segue into listening more. In addition, the online streaming service Spotify charts songs on its own, and one of the band’s new numbers, “Modern Love,” which appears on their most recent album, has risen to become their top track.

Speaking Suns recorded their first EP, “Part One” on their own in 2013. They are recording a new one currently, which will be available at the end of summer, and a new full-length album will be forthcoming next spring. They have recorded and released two LP’s: “Vanishing Country,” in 2014, and “Range,” in 2017.

Speaking Suns can be found on Facebook and Youtube, and their music is available for streaming on Bandcamp, Soundcloud, Google, Deezer, and Spotify, and available for purchase at Amazon and iTunes.

Information about the Bellwether Festival can be found at http://www.bellwetherfest.com.

*Tracy Perkins-Schmittler is a local musician and writer.