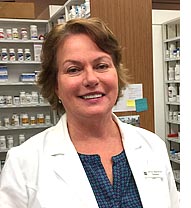 Janice Blandford, head pharmacist at Town Drug for the past four years, says she is “semi-retiring” as she leaves the local drug store after 20 years off and on, and moves with her husband, Thad Tarpey, to New York City, where Tarpey has a new job. (Submitted photo by Moira Laughlin)

After 35 years as a pharmacist, 20 of them off and on in Yellow Springs and the last four as the full-time druggist in charge at Town Drug, Janice Blandford is leaving the downtown pharmacy and moving to New York City.

She’s not completely retiring from the field, however — she’s calling the new step “semi-retirement” — as she eventually plans to return to work part time after taking a bit of a sabbatical as she settles into her new home.

Blandford and her husband, Thad Tarpey, will be living in the New York borough of Brooklyn, not far from their elder daughter, Amelia Rose Tarpey.

Their move was prompted by Thad taking a new job, leaving a longtime position as part of the math and statistics faculty at Wright State University to become a statistician with the New York School of Medicine.

“It’s a very good opportunity,” Blandford said in an interview last week. “His office is going to be on Madison Avenue. He’ll be a ‘Mad Man,’” she added with a smile.

Blandford said she is also looking forward to living closer to Amelia, 27, who works with GrowNYC, a nonprofit group that oversees farmers markets throughout the city.

But while Blandford is upbeat about the next phase in her life, she said she also will miss not only living, but also working in Yellow Springs.

“I enjoy being part of the community through my job,” Blandford said.

She said she values getting to know all the people who come into Town Drug and appreciates seeing “all their various ways.”

The job allows her to witness a wide spectrum of the human condition.

Sometimes it’s tragic. “We have seen people decline,” and the loss of relationships is hard, she said.

But sometimes it’s as “silly” as a television sitcom, she added.

“We had a person who used to call to ask us to look across the street at the price of gas.”

“We laugh a lot,” Blandford said. “Not at the expense of the suffering of others, but just human nature.”

Moria Laughlin, one of four technicians at the pharmacy, said that Blandford’s “easy-going” manner and “great sense of humor” set a welcome tone for staff and customers.
“Janice has been a good friend and we’ve been lucky to have her as our supervisor here at Town Drug,” Laughlin said. “She is patient and fair, and we have a lot of laughs, which I think is pretty unusual in a work environment.”

In working with the public, “she always treats the customers with kindness and respect, going above and beyond to ensure their safety and comfort,” according to Laughlin.
Villager Neil Silvert agreed.

“She really followed through on the legacy of Tim (Rogers),” the lead pharmacist whom Blandford succeeded after his death in 2014, Silvert added, defining that legacy as one of “openness, friendliness and kindness.”

Watching Blandford in action, one sees her greeting customers — and their dogs — by name as they approach the druggist’s counter.

She said she cherishes the deep sense of knowing that is part of being a pharmacist in a small town.

“There’s a greater sense of caring” for customers, she said. “They’re not a number. You see them as a person.”

That familiarity also helps her better attend to customers’ needs. Medical patients often see their pharmacist more often than their doctor, she noted, giving the pharmacist a unique perspective.

“You notice things,” like changes in appearance and well-being, when you know and serve people over time, she said. And it can be as simple as observing: “You seem really short of breath. Have you talked to your doctor?”

A native of Kentucky, and a 1982 graduate of the University of Kentucky, Blandford came to Yellow Springs with her young family in 1994 after Thad was hired at Wright State. Second daughter, Julia, now 21, was born here.

She and Thad, also a graduate of UK, married in 1982. She took a job in the pharmacy of an Appalachian medical center in the eastern part of the state while he finished his undergraduate work.

A year later, they moved to Bloomington, Ind., where Thad got his doctorate. They went to Colorado for his post-doc work.

“We had some adventures,” she said of their early married years. They took a long bike trip along the California coast, and they spent two months biking and camping in Europe.
She continues to enjoy biking, typically riding her bicycle to work each day downtown from her home on Kingsfield Court.

Blandford said her introduction to the local pharmacy, then called Johnson & Erbaugh’s, was as a customer, purchasing Benadryl for Amelia, then a toddler, when “Carl Johnson was still running the place.”

She first went to work there under Fred Messina.

Working part time while her girls were young, she eventually took a full-time position in 2004 at the Fairborn Kroger pharmacy, returning to the local drug store in 2008 and splitting her time between the two until she became full time here after Tim Rogers’ death.

She said her family was able to build an extra room on their home from her Kroger income. “We call it the Kroger wing,” she said.

She said she went into pharmacy because she liked science and chemistry and “wanted to go into health care.” As a profession, pharmacy “was stable and could provide good living” and could be pursued in a variety of settings.

It has provided all she hoped, even as the field has changed over the years, she said.
Some of the changes are societal. Smoking, for example, was a widely acceptable practice 35 years ago, especially in eastern Kentucky where tobacco was an important cash crop.
“When I was first out of school, they even allowed smoking in the hospital,” she said. “There was always a haze in the cafeteria.”

Other changes, she said, include “more and more people are taking medication (now), and people are living longer. And that is due to (medical) intervention and the advances of health care.”

Advances in treatments for diabetes and heart disease especially are prolonging patients’ life and giving them higher quality of life, she said.

On the business side of things, insurance and pharmaceutical companies play a larger role in managing care.

“It seems like insurance is running the entire (field),” Blandford said. Insurance reimbursements “will determine the future of this pharmacy,” she added.

“The reimbursement is so low, places like Kroger can absorb some of that loss,” but smaller ventures like Town Drug struggle.

While Blandford is leaving Town Drug to a stable group of employees, including part-time pharmacist Emma Robinow, a decision about her replacement had not been made earlier this week.

Blandford said she will miss her staff, along with the community.

She has lots of good memories, especially as her children went through school.

“We had a wonderful neighborhood in Kingsfield,” she said. There were tons of kids back then.”

She and Thad plan to keep their house, and are considering the possibility of returning after they both fully retired.

“We have a very strong sense of community here,” she said. “I am just so struck at how kind and helpful people can be here. I just feel very lucky that I had the opportunity to live and work in this small, funky town.