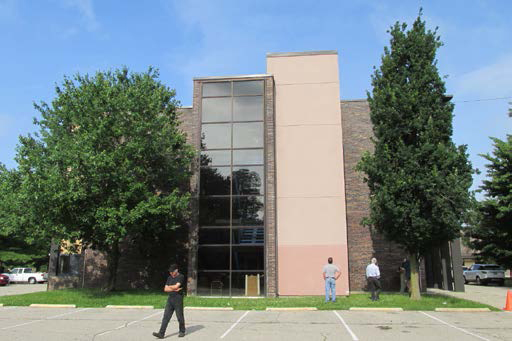 The east exterior wall of the three-story section of Yellow Springs High School needs some joist work but is structurally safe, according to a report by the structural engineer firm Shell & Meyer Associates Inc., of Oakwood. (submitted photo)

By Carol Simmons
The structural safety of the three-story section of Yellow Springs High School and the modular units of McKinney Middle School “do not pose an immediate structural concern,” according to a report summary by the Oakwood-based engineer firm Shell & Meyer Associates Inc.

District Superintendent Mario Basora gave an update on the firm’s findings to the school board during the board’s most recent regular meeting Thursday, Aug. 9.

The final report follows a visit to the high/middle school campus by two structural engineers June 13.

Basora said that the findings echoed observations by community members who accompanied the site visit.

The engineers felt that some of the facility’s issues “are more cosmetic than design problems,” Basora said.

Basora had invited the engineers to visit the school campus after the defeat in May of a levy to pay for a proposed plan to combine reconstruction and renovation at the building, based in part on findings of the Ohio Facilities Construction Commission, or OFCC, that found areas of the structure to be unsafe. Community members questioned the OFCC’s findings and called for another assessment. The structural engineers were brought in to address the issue of safety.

The Shell & Meyer report summary, which Basora shared with the Yellow Springs News, stressed that “the findings in the report are limited to visual observations. Detailed inspections or testing of structural elements were not performed.”

Nevertheless, the engineers concluded that the separation of the east exterior wall of the high school from the floor can be repaired, and that bolts can be installed to secure the steel joists.

“The remaining items observed [at the high school tower] were related to general shrinkage and temperature cracking of the brick veneer or cracking of concrete due to multiple freeze-thaw cycles,” the summary states.

The report recommends that the “brick be tuck pointed … and that exterior cracked concrete be pressure injected with an epoxy adhesive to minimize further damage.”

At the middle school, one problem cited is the brick veneer of the south wall does not align with the ungrouted foundation, allowing water to enter the crawl space under the modular units. Grouting, water-prooofing and moisture barriers would address the issue, according to the report summary.

Like the high school tower, other problems are related to general shrinkage and temperature-related cracking of the brick veneer and concrete.

Given the findings, Basora asked board members if they would like to proceed with the hiring of a firm to conduct a more complete facilities evaluation as a second opinion to the OFCC report.

Board member Steve McQueen cautioned against securing a firm that had any appearance of interest in certain outcomes, particularly construction.
Basora assured the board that “the people I’m talking about are not in construction.”

Several board members expressed hesitancy at the added expense to the district — up to $20,000 according some estimates; and board member Sylvia Ellison urged everyone to remember that structurally sound buildings do not necessarily provide “optimal teaching space.”

Basora said he would continue to pursue information gathering.

In other school board business Aug. 9:
• A plaque of appreciation was presented to longtime district employee Susan Griffith, who retired as the district’s administrative assistant at the end of the 2017–18 school year. During her 28-year tenure with the district, Griffith worked with four building principals and under two superintendents.
“I’ve been working with Susan for seven years,” Basora said in introduction to his remarks.

“If she says it, it’s right,” Basora responded, continuing on to express his “sincerest gratitude,” for her years of service.

For her part, Griffith said retiring is harder than she anticipated, especially as the new school year draws closer.

“I couldn’t have worked for better people and with better people,” she said. “I remember walking into Mills Lawn [when first employed as a secretary there] and thinking, ‘Man, I love what I do.’ And that never changed.”

• Superintendent Basora gave a brief overview of his trip this summer to attend a global leadership summit in Berlin, Germany. Basora was one of three Ohio superintendents chosen by the Buckeye Association of State Superintendent, or BASA, to attend the international conference and participate in related travel. BASA also paid for the experience, about $5,000, according to Basora. (A more detailed story about the trip is on Page 1.)

• Superintendent Basora and board members discussed the Greene County Career Center’s proposed capital improvement levy and the center’s request for a resolution of support. Information about the levy and the career center’s plans will be explored in next week’s News.

• The board approved continuing to purchase property and liability insurance from Anderson-Williamson Insurance Agency at a premium of $32,490, effective Aug. 19, 2018, through Aug. 19, 2019.

• The board also approved a contract for gifted supervision services for the 2018–19 school year with Madison-Champaign County Educational Service Center, in the estimated amount of $5,574.11. The ESC provided similar services last year.

•Superintendent Basora introduced a new staff member. Villager Joseph Carr will be teaching PBL foundations to K–3 students at Mills Lawn. Carr, who has spent the past several years as a stay-at-home parent, previously taught in the Dayton School system. He has three children attending Mills Lawn this year.

• In personnel matters, the board accepted the resignation of teacher substitute William Barnette.

• Filling board-related positions left vacant by the Aug. 1 resignation of board member Sean Creighton, the board appointed Steve McQueen as legislative liaison and Sylvia Ellison as board vice president and treasurer pro-tem. The board agreed to meet Thursday, Aug. 16, at 7 p.m., to discuss the appointment of a new board member to fulfill Creighton’s remaining term, which ends Dec. 31. His resignation was prompted by his move out of the district. According to state rules, the appointment could not be made until 10 days after the resignation, and must occur before 30 days have passed.

The next regular board meeting is Thursday, Sept. 13.

One Response to “YS School Board— Engineers: Structures safe”