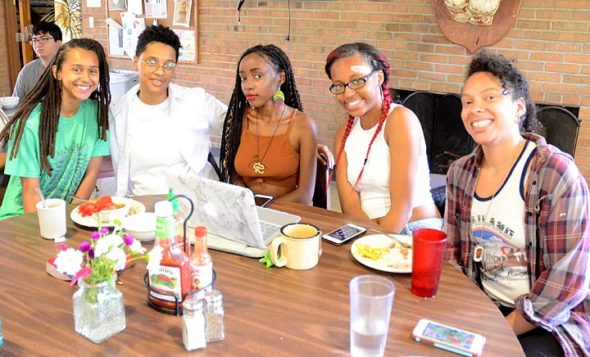 A decade after Antioch College closed, and seven years after it reopened to students as an independent institution, rebirth has been slow. 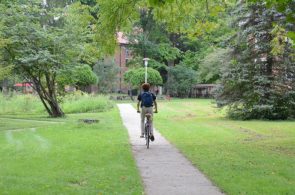 This fall slightly more than 100 students are enrolled at Antioch. Of the 48 new students, 36 are first-year students.

The campus community has slimmed over the last three years after hitting a post-revival peak of 270 students. And the budget deficits, staff pay cuts, faculty furloughs, missed enrollment targets and retention struggles of recent years have testified to the challenges of restarting a college from scratch.

But the struggles of the recent past didn’t dampen spirits on campus last week, where the mood at the start of the fall semester was one of optimism and excitement.

Students and faculty have their sights set on experimentation and collaboration, and in the words of one student, “changing the world.”

“We’re making progress on a lot more of the big stuff, like curricular changes,”  fourth-year student Daniel Cox stated confidently when asked about the state of the institution.

From the vantage point of an upperclass student, Cox has witnessed Antioch’s rebirth pangs, but now sees the community coming together to make progress toward the changes many have long wanted to see.

Among them are a new curriculum, a new academic calendar and move to exclusively self-designed majors — all changes put in place this fall.

Antioch’s new motto, “Own Your Education,” which highlights the college’s recent switch to self-designed majors, is something that Cox not only resonates with, but truly “owns,” for he helped craft the slogan.

“It’s about getting recognized for the things you are hoping to accomplish,” he said of its meaning.

Many student accomplishments take place right on campus, added film major Zoe Ritzhaupt, and go on to have significant impacts on society. Witness the Sexual Offense Prevention Policy, she said, reaffirmed in present-day discussions on sexual consent, even though, at the time, “SNL made fun of us.”

“I think that Antioch can put things into the world that can be adopted by others,”   Ritzhaupt said.

The college’s impact on the larger world continues to attract students. It did for first-year student Delaney Schlesinger-Devlin. A child of two alumni, she swore she would never go to Antioch, but a campus visit in high school changed her mind.

“There’s something so passionate and forward-thinking about this place,” Schlesinger-Devlin said.

‘A work in progress’

This year’s changes come as a result of a two-year visioning process that began after accreditation was secured, explained President Tom Manley. It took what Manley called “an enormous amount of energy,” but speaks to Antioch’s identity as an ever-evolving institution.

“The truth is Antioch has always been a work in progress — progress in both ways. And we continue to be that,” Manley said.

Antioch is currently in a readjustment period according to Antioch faculty member Louise Smith, one of two faculty remaining from the college’s previous incarnation, and someone with a distinctively long view of the institution.

“All through last year there was a lot of discussion about the need to reinvent and change the college,” Smith explained.

The new academic calendar will ease the burnout caused by nearly year-round work and study, and also means that faculty will be on campus at the same time and that transferring will be easier, according to college staff.

“There has been no rest,” Smith said of recent years.

Rather than covering the required courses for specific majors, the new curriculum is more flexible and oriented around  faculty interest and expertise, according to Luisa Bieri, who is beginning her third year teaching at Antioch.

“Faculty members are really being encouraged to teach to their passions,” said Bieri, an instructor in cooperative education. “From that, I think we’re in a place of feeling inspired.”

Bieri is just coming off teaching a summer course on community action, a project-based class where students received college credit for the kind of campus and community organizing they were already expected to do in their scarce free time.

Students have carried a heavy load at Antioch, working, studying and going on co-ops all while rebuilding the college, Bieri said.

Faculty are poised to unleash their creativity this school year, attests Brooke Bryan, a five-year member of the co-op faculty and the new chair of the writing program.

“There is a general climate of experimentation and innovation just coming out of the faculty as we think about how to integrate our own learning,” Bryan said.

In addition, Bryan looks forward to working with her colleagues in a way they couldn’t on the previous schedule, when cycling in and out of research terms meant many ideas couldn’t gain traction.

“I’m excited to get some ideas off the ground,” Bryan said.

Smith is also teaching a new course, Dialogue Across Difference, one of the curriculum’s new required courses. The course is aimed at addressing Antioch’s struggles with “walking our talk,” Smith said.

“We are very aspirational in our language about who we are and what we do,” Smith said. “That’s wonderful, but it makes us accountable to something very ambitious.”

The course, co-taught with Nzingha Dalila, the school’s mental health counselor,  will help students develop the skills to navigate difficult conversations around race, class, gender and other differences, Smith explained.

‘We have to get there’

Last week as Louima, admissions dean since last year, sat in his office, enrollment dates were displayed behind him on a white board. As the class of 2022 settles into their dorm rooms, Louima is already working on finding the class of 2023.

Enrollment targets in the range of 60 to 75 new students have been missed for the last two years, in part because Louima came to the process late, he said. Current campus resources, meanwhile, could support 300 to 400 total students.

Eventually, the college needs to move from being so heavily reliant on philanthropy — which represents 80 to 85 percent of the college’s current revenue, according to Manley — to having a sustainable revenue stream from tuition.

“We have to get there,” Louima said of that transition.

But progress has been slow, and an Antioch education is still discounted four years after the last class received full tuition. Louima estimated that the current discount is the range of 70 to 80 percent, taking into account needs and merit-based scholarships.

Louima also shared that he is still working on getting the college authorized to accept veterans and international students, which were lost when the college closed. On the positive side, progress has been made in instituting a mid-year enrollment period and making it easier to transfer to Antioch.

Finally, Louima emphasized the importance of continuing to hone the curriculum and strengthen student support, which is increasingly in need during a stressful time globally, and on campus, for young people.

“In a college like this where we ask students to be their whole selves, we need to ask, how do we support you to becoming the person you’d like to become, you need to become?” Louima said.