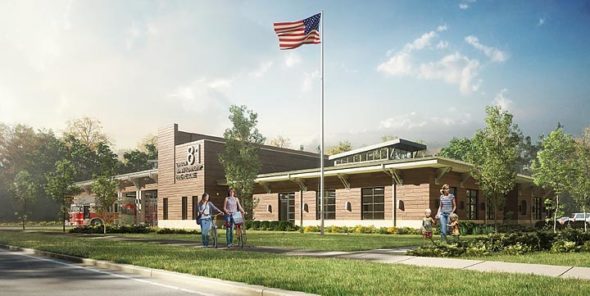 A recent rendering of the Miami Township Fire-Rescue station by project architects MSA Architects of Cincinnati shows what the new fire station along Xenia Avenue may look like. The project has been delayed because an initial bid to construct it was too high. (Rendering courtesy of MSA Architects)

The timeline for construction of the new fire station on the south side of town has been pushed back several months as the township seeks new bids for the $4.9 million project.

After the Miami Township opened the bidding process in mid-June, only one bid was made, and it was for more than $1 million over the designated cost, Township Trustee Don Hollister said in a recent interview.

“We had to reject it,” Trustee Chris Mucher said in a separate interview.

“We had to step back and see what needed to change” about the project to attract more bids as well as bids within the desired budget,” Mucher said.

“We’ve refined and redefined the bid,” he said, going on to explain that the architectural design, completed by MSA Architects of Cincinnati, included “about 30 items  they felt we could change or modify” to reduce the cost.

They were able to achieve $175,000 in savings through such modifications as changing and reducing the number of light fixtures and other design options, Mucher said. And they can save up to another $150,000 offering “alternatives” to other features, such as eliminating  skylights, if anticipated costs remain too high, Mucher said.

The modified project will be advertised beginning next week, with the expectation of receiving bids by mid-November, he said.

Trustee Hollister said that the local project was among others in Ohio with bids coming in at $1 million over the advertised amount this summer.

“When [firms] are putting in bids, they’re for work over the next year.” With the recent “tariff and trade war uncertainties, there’s not a fixed price, so they’re nervous.”

Voters in May 2017 approved a 2.4-mill, 30-year bond issue to construct the new station. The bond is anticipated to raise about $5.75 million. The $850,000 difference from the $4.9 construction costs is to pay for other related expenses, including architect, engineer, attorney and other council and advisor fees, Mucher said.