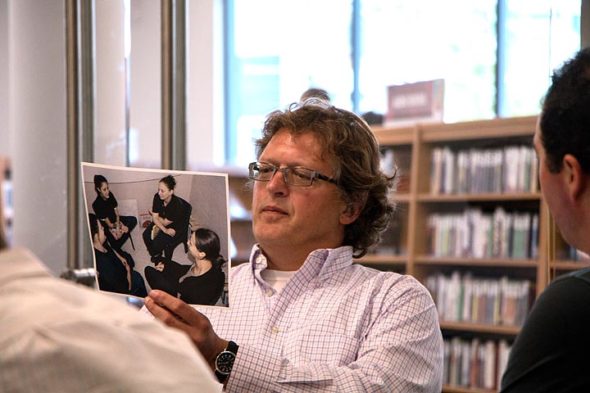 Local resident Jonathan Platt started Story Chain, a project that helps inmates in local correctional facilities connect with their children through the stories they record themselves reading. Platt has run the program at several local prisons and jails, including the Greene County Jail. (Photo by Morgan Beard)

“I’m not just a convict, I’m someone’s mommy,” Krista Vandyke, a former inmate at Montgomery County Jail, wrote in a letter to Jonathan Platt shortly before her death.

Vandyke was a participant in Story Chain, a program that gives inmates the opportunity to read to their children from the confines of incarceration.

Platt, a Yellow Springs resident, has completed five cycles of Story Chain since he started the program in 2014. Platt is an instructor at Sinclair Community College, Wilberforce University, and Central State University.

The idea of Story Chain is to help inmates in local correctional facilities record themselves reading books aloud. Each audiobook is then matched with a paper copy and given to the child of the inmate, giving them the experience of having their parents read to them.

For Vandyke’s children, the recordings are a piece of their mother that they have been able to hold on to.

When Vandyke finished her first Story Chain recording, Platt was excited to deliver the MP3 player to her four-year-old daughter. However, there was a problem; the father of the girl would not answer Platt’s calls. According to Platt, he will never deliver a recording without the permission of the current guardian. For a while it seemed like Vandyke’s story might never reach her daughter, but then Vandyke was released from jail, and died shortly after at the age of 25.

Through the tragedy of the young woman’s death came a new piece of information. In reading through condolences posted to her Facebook profile, Platt noticed something he hadn’t known about Vandyke: she had another daughter.

Vandyke’s eldest daughter was nine years old and lived with her father in Oklahoma City. Platt was able to get in touch with the man and got his permission to send the MP3 player and story to him to give to his daughter.

Finally, Vandyke’s voice found one of her children. Soon after, the nine-year-old daughter called her younger half-sister and told her about the recording. Now both girls have copies of the audiobook that their mother made for them.

“So, the voice lives on,” Platt said.

Platt began Story Chain in 2014 and received a master’s degree in English composition from Wright State University in 2017 to help him further pursue the program. Originally from Louisville, Ky., he graduated from Antioch College in 1996 and has been a village resident since 2006.

Platt said that the goal of Story Chain is to break the vicious cycle of incarceration that perpetuates itself over generations. Children of the incarcerated, he says, are four times more likely to be incarcerated themselves at some point in their lives than children whose parents have never been imprisoned.

It is estimated that 1 in 28 children in the U.S. have a parent who is incarcerated, 1 in 9 for black children, according to a 2010 study by Pew Charitable Trusts. Moreover, a 2010 Bureau of Justice Statistics study showed 52 percent of inmates in state prisons, and 63 percent of inmates in federal prison have minor children.

Another goal of the program is to mitigate the stress that is felt by both inmates and their children when they communicate with each other.

As Platt explains, it can be a daunting task to try to model good behavior for your child when you are being confined for your own mistakes. For inmates, that means that almost every interaction they have with their children might be tainted by stress and anxiety, which can transfer onto the children.

By coaching the participants to remove the stress from their voices, Story Chain gives children a chance to hear their parents speak without the normal pressures and anxieties, in a way that puts them at ease as only a parent’s voice can. This, Platt says, is the key to a good recording.

While programs like Story Chain exist in prisons all over the country — Platt got the inspiration for his program from a similar one that exists on Rikers Island — it is very rare to see them in jails. In fact, there are almost no rehabilitation or betterment programs in most jails, according to Platt, something he sees as a major problem.

Typically, jails differ from prisons in that they are designed for shorter-term sentences and for holding suspects who are awaiting trial; however, those lines are beginning to blur. With prison populations ballooning, more pressure is being put on jails to house greater numbers of inmates for longer periods of time. According to Platt, it is not uncommon for an inmate to spend two years in a county jail.

“They’re sober, they’re well behaved, we have books for them and that’s it,” Platt said. “They could be pursuing their G.E.D., they could be getting a job trade, just like we do in prison.”

Platt came to that realization after his first time trying the program in 2014 at Dayton Correctional Institute, a prison. Although the process was more or less successful, the nature of prisons meant that the children of the participants were scattered across multiple states. Ideally, Platt wanted to be able to work with the local libraries nearest to each child and to hand deliver the packages containing each book and MP3 player, but that was impossible at the prison.

So, he decided that the next time he did the program it would be in a county jail. And that, he said, was the epiphany that made all the difference.

Platt ran his program two more times, once at Montgomery County Jail, where he met Vandyke, and again at Clark County Jail. While the two cycles helped solidify his impression that jail was the right place for the program, Platt still didn’t feel that he had found Story Chain’s home. That is, until he found Greene Leaf.

Greene Leaf is a six-month rehabilitation program at Greene County Jail and the Greene County Adult Detention Center meant to help those with substance abuse problems.

According to Maj. Kirk Keller, Administrator of the Greene County Corrections Division, Greene Leaf is the only therapeutic community in Ohio that is housed within the walls of a jail. That made it the perfect place for Story Chain.

“Greene Leaf is the most important thing that has happened to Story Chain,” Platt said, “This is the only jail in this area that does [rehabilitation].”

Platt says that Greene Leaf counselors have been invaluable when working with inmates, and the fact that participants in the program are separated from the general population makes it easier to work with them. Since moving to Greene County, Platt has even run the program with a men’s group, which he had never tried at the other institutions.

Story Chain is usually an eight- to ten-week program that consists of about 10 workshops. At the beginning, participants get to discuss books and pick the one they want to read at a mini book fair, with books provided by the local library. Then they practice reading the books aloud and are given coaching to eliminate stress and add dynamics to their narrations. When they have finished practicing, members of the community are invited to visit the jail to hear presentations by the participants about their projects. Finally, professional recording equipment is brought in and the participants record their final cuts.

When the recordings are finished, Platt downloads each one on to an MP3 player provided by the Greene County Jail and gets a copy of the corresponding book from the library closest to the child who will receive the story. Most libraries donate these books for free, and some even assemble care packages to go with them.

“We want the MP3 player to be that all-encompassing audio unit,” Platt said, explaining that while many similar programs use CDs or tapes for the recordings, he wanted the devices to be portable, so kids could listen to them anywhere.

“There’s a girl who has two homes that she goes to and every time she gets in the car she listens to her mother,” he said, “So, her mother is kind of a link between her two homes.”

Yellow Springs Mayor Pam Conine has attended the community outreach portion of the program and reflected on the value of inmates giving something tangible back to their loved ones.

“The Story Chain project allows inmates in the program to ‘get outside of themselves’ and think about their children and family members in positive ways,” Conine said. “Nourishing these types of programs is a win-win for all involved.”

Currently, Story Chain is not an independent nonprofit. Instead, it has partnered with local nonprofits who act as fiscal sponsors for the program, handling its accounting and holding any funding raised for it. Story Chain is currently sponsored by the Greene County Community Foundation.

Both Platt and his partner Craig Campbell emphasized their immense gratitude for the Community Foundation, as well as for their first sponsor, PowerNet of Dayton, for their help getting Story Chain past the proof of concept stage. Now, Platt and Campbell are almost ready to apply for their own nonprofit status.

“We get together and meet but there’s no actual authority, it’s more of an ad-hoc at the moment,” said Campbell, explaining that they have already assembled a board to oversee the would-be nonprofit, “We’re functioning as a full nonprofit even though we don’t actually have that status quite yet.”

Under the proposed nonprofit, Platt would hold the status of CEO and Campbell would be president of the board. Luke Dennis, the development director at WYSO, would be the board secretary and Chris Simon, a professor at Duke University, would be its treasurer.

Though the program is still in its early stages, Platt has high hopes for what Story Chain could someday become.

*The author is a student attending Ohio University who interned with the News this summer.