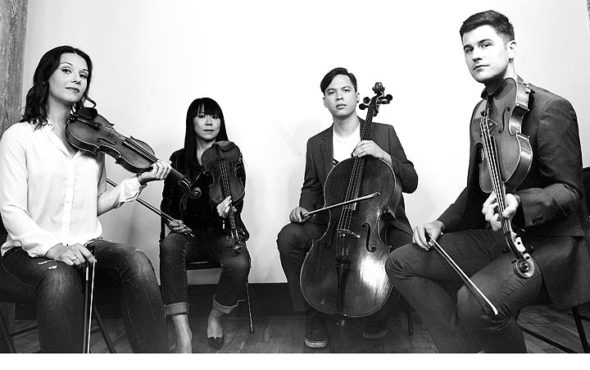 Attacca Quartet will present an all-Beethoven program on Sunday, Nov. 4, at 7:30 p.m., at the First Presbyterian Church, as the second installment of Chamber Music Yellow Springs’ 2018–19 season. (Submitted photo by Shervin Lainez)

The New York-based Attacca Quartet will bring their “uncommon vibrancy” — as described by the Cleveland Plain Dealer — to an all-Beethoven program when they take the stage for Chamber Music in Yellow Springs on Sunday, Nov. 4.

One of this season’s “old friends,” the string quartet formed at The Juilliard School in 2003 and performed as finalists in CMYS’ 2007 Annual Competition. That same year, the quartet made their professional debut as part of the Artists International Winners Series in Carnegie Hall’s Weill Recital Hall. From 2011 to 2013, they served as the Juilliard Graduate Resident String Quartet, and for the 2014–15 season, they were selected as the Quartet-in-Residence by the Metropolitan Museum of Art in New York. The group — Amy Schroeder, violin; Keiko Tokunaga, violin; Nathan Schram, viola; and Andrew Yee, cello — currently serves as the Ensemble-in-Residence at the School of Music at Texas State University.

The Attacca Quartet has received international acclaim and become one of America’s premier young performing ensembles; the group were first-prize winners of the Seventh Osaka International Chamber Music Competition, top prize and Listeners’ Choice Award recipients of the Melbourne International Chamber Music Competition and Grand Prize winners of the 60th annual Coleman Chamber Ensemble. Gramophone praised the group for “superlative artistic and technical execution.” According to The Washington Post, “they come very close to epitomizing the string quartet ideal.” Chamber Music America, the national network for ensemble music professionals, awarded Attacca Quartet a 2017 grant to support the creation and performance of a new work by composer Chris Rogerson.

On Nov. 4, the Attacca Quartet will perform Beethoven’s string quartets in D major, Opus 18, no. 3, in F major, Opus 135; and in E minor, Opus 59, no. 2. The concert will begin at 7:30 p.m. at First Presbyterian Church, with a preconcert lecture by Charles Larkowski, professor emeritus of music at Wright State University, at 6:45 p.m.

A post-concert dinner will provide an opportunity to meet the performers; to reserve a space, call 374-8800 by Nov. 1. Further information and tickets for the performance are available at http://www.cmys.org or by calling the number listed above. CMYS is grateful for support from the Ohio Arts Council, the YS Community Foundation and its many individual donors.