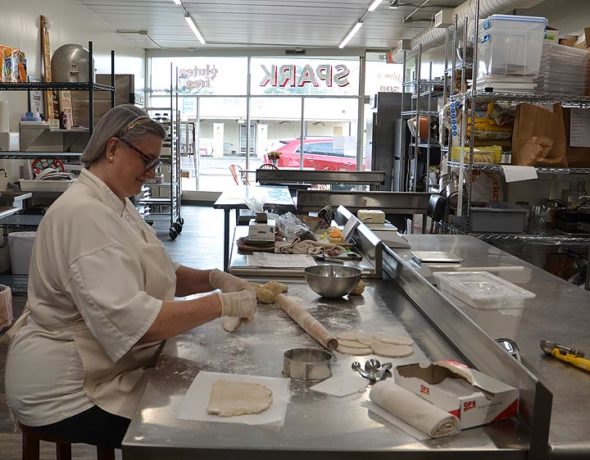 Chef Amber Tipton of The Neighborhood Nest rolled out dough recently at the SPARK Gluten-Free kitchen incubator in Fairborn. Several local businesses are anchored at the incubator, which is informing local discussions to create one here. (Photo by Lauren “ChucK” Shows)

If you look at it the right way, a new business is like a seed: it needs a good, fertile place to grow.

That’s what the City of Fairborn is hoping to offer to emerging businesses — room to grow. Fairborn opened its SPARK Gluten-Free kitchen incubator in January of this year, and several small business initiatives in the Miami Valley — including several from Yellow Springs — have already taken root there.

At the end of September, the space will expand into SPARK Fairborn, a general commercial kitchen and business co-working space. In addition to nurturing several village businesses, the Fairborn incubator is also informing the discussion about how collaborative, shared business spaces might function in Yellow Springs.

The incubator kitchen and the soon-to-be-opened second incubator are next-door neighbors in downtown Fairborn, in the space formerly operated by Roush’s Restaurant, which closed in 2015 after 54 years in operation. The city’s designated community improvement corporation, Fairborn Development Corporation, procured the block on which the former restaurant sat, and established the gluten-free kitchen as the first phase in its planned incubator space.

One of the Yellow Springs businesses anchored at Spark Gluten-Free is Black Barn Creamery, a purveyor of both vegan and dairy ice cream treats currently being sold at the Emporium. Black Barn’s owner, Jayne Brahler, is well-versed in the inner workings of small businesses.

Brahler has owned her own businesses at several times in her life, including a bakery in Montana in the 1970s and a farrier business between 1978 and 1990, which specialized in equine hoof care.

“I was the first woman to pass the American Farrier’s Association journeyman certification exam,” Brahler said.

These days, Brahler’s day job is at the University of Dayton, where she is a faculty member in the physical therapy department. Brahler said the main reason she decided to start making ice cream was simple: she loves ice cream. So does her husband, she said, but his vegan dietary restrictions mean his options for that particular indulgence are limited, and she felt she could improve upon what was available.

Brahler also said she’s looking into the long term: “I am in my 60s,” she said, “and looking forward to a transition into what I will do when I eventually retire from UD.”

Brahler said she’s made great strides while working with SPARK, becoming licensed by the Ohio Department of Agriculture Dairy Division — “On the same level as Graeter’s and Young’s!” she said. Another benefit of the space was learning from others who work there, especially Xenia resident Chef Amber Tipton of the Neighborhood Nest and Anarchy Foods. The communal aspect of the shared kitchen has practical applications as well, she said.

“If you think about it from an ecological standpoint, the benefits of a shared kitchen, where even established producers come together so that they are not wasting resources and burning up energies on redundancies of services — that’s huge.”

One such established producer from the village is Karen Reed of Stoney Creek Garden Center. The business, which she owns with her husband, Steve Reed, is a short drive up U.S. 68 on the north end of town, and opened in 2015. Stoney Creek sells live plants, and Reed’s new endeavor, called Tea, Spice and Petal, is an extension of the work she’s already done at the garden center.

The new business’ product formulations are based on principles of herbalism and aromatherapy, according to Reed — she has a degree in complementary and alternative medicine.

“We wanted to utilize this approach in all of our products,” she said. “Nature appreciation is the foundation of all that we do.”

Though Stoney Creek already has a robust physical location, it wasn’t what the Reeds needed when it came to producing food-grade products.

Reed said that building a full commercial kitchen to meet regulatory requirements for a start-up food business did not make financial sense. So she reached out to YS Chamber of Commerce President Karen Wintrow for a lead on commercial kitchen space to rent, and Wintrow tipped her off to SPARK Gluten-Free.

During its time under the wing of SPARK Gluten-Free, Tea, Spice and Petal has already begun to stretch.

“The incubator is allowing us to scale up the business to the point that we will need a commercial kitchen of our own for education and retail sales,” Reed said.

The City of Fairborn’s Revitalization Strategist Tonia Fish said recently that Fairborn started its incubator journey with the gluten-free space because that’s where the most need had surfaced.

“All the initial response happened to be from gluten-free purveyors who were really feeling the pain of not having a commercial kitchen,” Fish said.

The kitchen at SPARK Gluten-Free and the upcoming kitchen at SPARK Fairborn are managed by Rachel DesRochers of Incubator Kitchen Collective, which runs two shared kitchens in Newport, Ky. Fish explained that the city wanted to partner with an existing operator who understood how to run a kitchen incubator.

“That meant that we could really hit the ground running,” Fish said of the collaboration. “It allowed us to understand, in a microcosm, what we would do later here on a larger scale.”

When it officially opens this week, SPARK Fairborn will add a second, full-size commercial kitchen and a large, open co-working space to the incubator spaces offered in downtown Fairborn.

The kitchen is separated into two spaces — which Fish has lovingly nicknamed “Bakery Town” and “Savory Town.” In Bakery Town, there are four double-convection ovens and a six-top range. Savory Town features an eight-top range and double oven, as well as a large tilt skillet that can be used for making sauces, soups and more in large quantities. Member chefs will also have access to a large, dedicated food storage area, where they can keep their ingredients on racks that can be pulled out into the cooking areas for easy accessibility.

“This is really dedicated to the needs of those cottage-industry bakers who are working at home,” said Fish. “As their business grows, they get to a point where the real estate in their home kitchens and in their ovens just can’t support any more growth.”

“People are really excited about the opportunity to teach,” she said, adding that a local health inspector is coming in to teach canning and jarring and an event to teach knife skills for line chefs is also coming up.

Beyond the kitchens, SPARK Fairborn boasts a large, open space — the incubator’s co-working area, which is managed by the City of Fairborn. These areas are separate from the kitchen spaces and are reserved for other types of businesses. The open room is furnished with tables, chairs and couches conducive to a comfortable working environment — and all of the furniture is easily moved, as the room also doubles as event space. Flanking the open room are a large boardroom and a smaller meeting room that will host a mobile podcasting unit. Also on offer in the co-working space is a green screen and lighting area geared toward video production for YouTube and its ilk. SPARK Fairborn will also be the first area business to offer gigabit Wifi to its members.

“The goal is to create these nuances that help support and launch all the businesses that are members here and grow their knowledge base as well,” Fish said.

An incubator in the village?

Wintrow, the YS Chamber of Commerce president, recently met with representatives from SPARK Gluten-Free’s kitchen, took a tour and discussed how the incubator and the YS Chamber might work together in the future.

The idea of a kitchen incubator has been discussed in Yellow Springs for years, but simply hasn’t had “the champion to get it off the ground,” Wintrow said.

“It seemed logical to me that while we flesh the concept out locally, we connect with the closest opportunity we have in Greene County,” she said.

Wintrow added that a few YS Chamber members have been in touch with SPARK to explore ways to use the facility, and that the Chamber has discussed more opportunities for collaboration, including encouraging kitchen incubator members to use products made by village businesses like Yellow Springs Brewery, S&G Artisan Distillery and Peifer Orchards.

When it comes to that next step — opening an incubator in Yellow Springs —  Wintrow seems hopeful that it could still happen. She acknowledges, however, that Fairborn’s big head start could stall the conversation around a similar village initiative.

“I’m always looking for collaborative opportunities for Yellow Springs and my members, and this is one I clearly believe could be beneficial, given how far ahead SPARK is than us at this point,” she said.

Jayne Brahler of Black Barn Creamery echoes these sentiments, but cautions that what makes an initiative really soar is its connection to the community in which it’s placed.

“Perhaps the less obvious — and more rewarding — benefits associated with shared space kitchens are the social impacts,” Brahler said. “Successful kitchens are ones with missions that meet the needs of communities and that place doing good things above making money for individuals.”

Brahler said that much of her professional life has constituted working for the common good of communities. She thinks that an incubator in Yellow Springs could be a boon to the village — if it were managed with this common good in mind.

“I see Yellow Springs as a perfect place for a shared kitchen space with a clear mission to heighten civic engagement, social capital and community well-being — and a kitchen like this is viable for external funding,” Brahler said. “It supports what Yellow Springs already stands for. In contrast, a shared kitchen that is driven only by ‘monetary gain up the hierarchical chain’ — not such a good fit for Yellow Springs.”