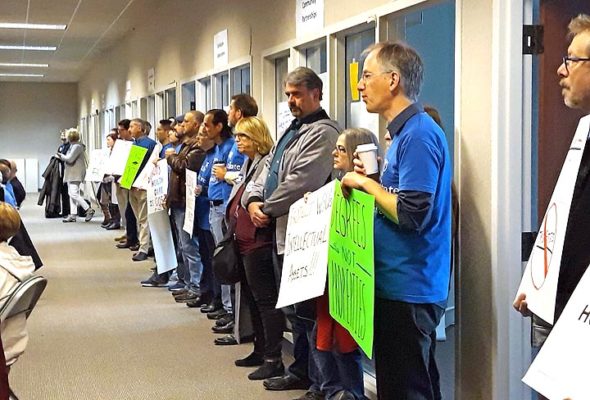 Villager David Seitz, a professor of composition and rhetoric in the English department at Wright State University, was among more than 200 faculty members and their supporters who attended the university’s board of trustees meeting Friday, Oct. 19, to protest the ongoing impasse in faculty contract negotiations. (Photo by Carol Simmons)

With the threat of a looming strike, about 200 Wright State University faculty members and their supporters packed the most recent meeting of the university’s board of trustees Friday morning, Oct. 19, to express their frustration and anger about the ongoing impasse in contract negotiations.

The show of solidarity on behalf of faculty was called for by the Wright State affiliate of the American Association of University Professors, or AAUP, the union that represents the approximately 560 to 580 full-time and part-time faculty and instructors on Wright State’s main and branch campuses.

The issue is significant locally in that a number of WSU faculty, staff, students, alumni and retired employees have historically been members of the Yellow Springs community. Founded in 1968, Wright State is one of two public institutions of higher learning in Greene County.

“It’s scary,” villager David Seitz, a professor in WSU’s English department, said this week of the strike possibility. “It’s very scary for most of us.”

Seitz was one of several local faculty members in attendance at Friday’s trustees meeting.

Wearing blue T-shirts declaring their AAUP affiliation and carrying a variety of signs — “Save WSU,” “We are Fighting for Wright,” “Isaac Newton read Aristotle,” “History profs will write your legacy,” “We love our students,” among them — the faculty laid out their concerns before the board and in a press conference afterward.

In dispute is the administration’s three-year contract offer that includes, among other measures, no raises, reduced health-care benefits with higher premiums, an erosion of tenure protections, the elimination of a workload agreement and new furlough rules that could amount to a 5 percent cut in pay, according to AAUP-WSU online materials. The last three-year contract gave faculty an approximate annual 3 percent raise, according to the union.

On the surface, the issues in question appear mostly financial, but also at risk is the faculty’s ability to negotiate certain benefits and working conditions, according to local resident Volker Bahn, an associate professor of biological sciences.

“The administration’s proposals are not mainly driven by economic necessity, but by a goal of consolidating power,” Bahn wrote in an email this week.

University finances
The contract negotiations with faculty follow several years in which the university administration has been embroiled in financial controversies that led to the resignation of former President David Hopkins and took the school to the brink of state-mandated fiscal watch.

In addition to a series of real estate and business ventures that did not secure anticipated returns, recent fiscal missteps, according to multiple sources, included a federal work visa investigation that cost the university more than $2 million; about $4.3 million spent in preparing for a presidential election debate later canceled by WSU; about $2.3 million paid to a consultant to secure research grants, with questionable returns; nearly $2 million to settle a student aid complaint filed by the U.S. Department of Education; $4 million in contract underbilling and budget overruns; and a Dayton Daily News reported presidential salary of more than $1 million in 2014 (reduced to more than $850,000 in 2015 and $560,000 in 2016).

After a total loss of more than $100 million in reserves over several years, the university undertook deep cuts in staffing and programming that faculty members contend have had a profoundly negative impact on the university’s educational mission and led to a significant drop in enrollment. Reports last year suggested that it would take the university 20 years to undo the financial damage of the previous six years.

The negative fiscal tide is turning, however, current President Cheryl Schrader reported to the nine-member trustee board on Friday, noting a $10 million surplus achieved for fiscal year 2018.

“We can say with certainty that we have avoided fiscal watch,” Schrader said.
“It may take 20 years to get our reserves back to where we were six years ago … but we made the impossible possible.”

Damage done
For faculty and staff, however, the damage continues to be felt keenly.
The elimination of positions and related resignations that left other positions unfilled has affected their ability to fulfill educational goals, faculty members say.

“We have lost some very, very good people,” and more are expected, Faculty Senate President Travis Doom told the trustees as part of his faculty report.
Villager Sirisha Naidu, an associate professor of economics and part of the union’s leadership team, was one of three additional faculty members on Friday’s agenda to address the board.

“Respect has to be earned, and you have not earned my respect,” she told the trustees.

Citing the administration’s loss of over $100 million in reserves, and suggesting that bad decisions and possibly misconduct led to that loss, she observed, “‘Lost’ is a funny word. It sounds like an accident.”

Naidu also noted that the trustees — who are appointed by the governor — all come from business backgrounds, rather than education, and she asserted that their corporate management model is not suited to higher education.

The corporate model “undermines academics,” she said, adding that the trustees’ failure to negotiate in good faith has “jeopardized this university.”

In a follow-up phone interview this week, Naidu reiterated that the trustees “have failed to pay attention to the academic mission of the university.”
She defined that mission, particularly in regards to a nonprofit public institution, as “not just to create a workforce, but also to prepare our students for the future,” she said. “We provide a broad education in the humanities, sciences and business. … It involves educating a citizenry.”

For many faculty, that mission is a calling.

“That’s why a lot of faculty chose academia,” she said. “Otherwise a lot of us could be working in other places. A lot of us believe in the larger mission of the public university.”

“We are committed to this university,” he said of faculty. The trustees, who serve temporary appointments, do not share that commitment, he added.

About 90 faculty members have left the university since spring 2016, Naidu said in addressing the trustees, adding that the proposed contract would prevent “us from attracting and retaining excellent faculty.” In addition, about 100 staff jobs have been eliminated, according to union officials.

“Wright State works because we, the faculty and staff, work,” Naidu concluded in her statement to the board Friday.

Seitz this week described how the job cuts and resignations have affected his department, where in addition to teaching, he is the director of the Integrated Language Arts program.

“I work closely with nontenured instructors and lecturers,” he said. “They’re the ones who are most vulnerable and most endangered,” he said.

Currently, adjunct faculty are hired as “instructors,” and after six years have the opportunity to be promoted to “lecturer,” which has additional job security benefits, Seitz said.

The administration wants to increase that time frame to 12 years, and they want to be able to fire nontenured faculty at will, he said. The academic tradition of tenure allows faculty to retain their positions except under extraordinary legal conditions.

Seitz noted that he has observed “a slump in morale” among adjuncts in direct relation to the proposed changes.

At the same time, he sees a “push” by the university to fill more classrooms with adjuncts, which he said is a disservice to the adjuncts — who don’t get the benefits of tenure-track positions — and to the department and students.
“Adjuncts don’t run programs,” he said. “The don’t advise students as fully. They don’t get involved in faculty governance.”

An increase in the number of adjuncts over full-time hires also means that full-time faculty have to fill more roles and are increasingly overburdened and thinly spread.

The cuts in programming and losses in faculty and staff have also negatively affected enrollment, according to villager Allen Hunt, a professor of physics.
“While enrollment reductions across the state university system this year averaged 1 percent, WSU lost 9 percent,” Hunt wrote in an email this week.
The enrollment drop, and accompanying loss of tuition, further negatively affects the university’s financial stability, he noted.

Board chairman responds
Board Chairman Douglas Fecher, president and CEO of Wright-Patt Credit Union, at Friday’s meeting defended the university board’s actions around contract negotiations, saying that contrary to the union’s assertions, the board “has worked with union leadership,” adding that there is “a set of laws on how negotiations progress.”

The board has pointed to declining enrollment and state caps on tuition increases as major causes for the university’s financial shortfalls. On Friday, a budget committee report blamed the drop in enrollment on budget concerns and negative media reports.

In his remarks, Fecher asserted, however, that there is commonality between the two sides.

“We share your passion and your commitment, and we want to do the right thing by all our constituents,” he said.

The problem, however, is “we don’t agree on the way forward.”

What’s next
A third-party fact-finder’s report on the negotations, which was delayed from its originally expected date in early September, is anticipated to be released Monday, Oct. 29.

According to the union, its executive committee will study the report and release a summary and recommendations to the membership by Nov. 1. The union then has 10 days to decide its next step, including the possibility of a strike.

No faculty member who spoke publicly last Friday or who spoke in follow-up interviews this week expressed a desire to go on strike, but they accept the possibility.

The personal and professional stakes are high, faculty members agree.

They are weighing the potential harm of a strike on students’ education and the university’s reputation against the anticipated long-term injury to Wright State’s academic mission and reputation if the administration’s contract proposal goes through.

Striking faculty can not legally be fired, but “if a strike is called, the university can terminate our healthcare, meaning that WSU employees whose spouses do not have healthcare (like in my case) will probably [also] not have healthcare for the duration of the strike,” Hunt noted.

The university’s financial stability is a real concern, faculty members agree, but they say making faculty carry that burden is misdirected, especially since their salaries and benefits reportedly make up about 17 percent of the total budget.