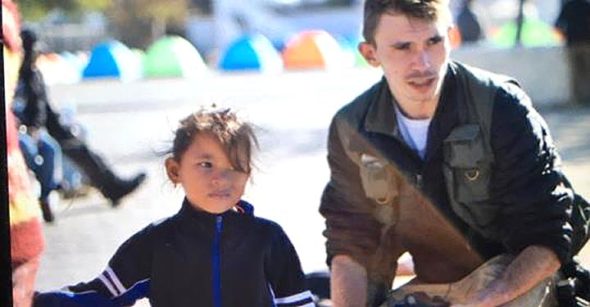 Yellow Springs resident Alex Rolland, who is working on a documentary film about the migrant caravan seeking asylum in the United States, recently spent time along the U.S.-Mexican border, returning there this week after a brief visit home. (Submitted photo)

The progress this summer and fall of the “migrant caravan” of Central American asylum seekers making their way north to the U.S.-Mexican border has sparked months of condemnation by President Trump, who has threatened a lethal response, sending U.S. troops to stop the migrants from entering the country.

With as many as 15,000 asylum seekers  having arrived in the area around Tijuana, Mexico, near San Diego, Calif. — the location of a legal entry processing site — the  situation grew more tense Sunday, Nov. 25, when U.S. border patrol agents deployed tear gas over the border, an act widely denounced across the country and internationally.

Locally, the situation at the border and the critical circumstances of the people seeking asylum is sparking deep concern among Yellow Springs residents who are spearheading humanitarian aid responses and working to raise wider awareness about the crisis. Among them are a documentary filmmaker, Antioch College community members visiting the Mexican border, Quakers focusing on immigrant justice and Antioch students hosting a clothing drive in cooperation with resident Cristina Hipp, who is collecting basic supplies for the migrants.

Hipp, a teacher and mother of three, said that the knowledge of the asylum seekers, many women and children, owning nothing but the clothes they wear and living in uncertain and dire conditions broke her heart. And she couldn’t ignore it.

“I couldn’t imagine [celebrating] Christmas with all there is going on down there,” Hipp said this week.

She decided that her family would put their Christmas preparations toward gathering and delivering basic supplies for the Central American people waiting to make their case for entry into the U.S.

She describes the decision as “impulsive,” but the idea stuck, and her determination to do something to help deepened.

Hipp said she started with the question: “If I had nothing, what would be the five things I really need?”

She decided to focus on basic hygiene and first-aid products, particularly feminine products.

“I was just thinking of how beat up they must be,” after months on the road, she said.

In her research about the migrants’ living conditions, she learned there is also a “huge need for diapers, wipes, baby formula and, of course, water.”

A newer need, as the asylum seekers wait indefinitely to meet with a border processing representative, is sleeping bags, tents and warmer clothes.

Hipp said that she prefers not to include clothing in her supply packages, as a collection effort by Antioch College students is taking in clothes. But if people want to donate clothes through her or Antioch, she said they should be sturdy and protective, adding that good socks are especially needed.

Another item she thinks could be helpful is warm, “cozy” blankets, especially for children. “There are a ton of the shiny emergency blankets down there,” but they aren’t very comfortable or comforting.

She also noted that people can also donate money or even Walmart gift cards — “there’s a Walmart in Tijuana” — if they’re comfortable with that. Donors can contact Hipp through Facebook messenger. The Emporium is helping, too, with a box to collect items.

Hipp plans to drive the supplies to California herself, accompanied by her eldest daughter. They’ll be joined by a friend in New Mexico, and then meet up with a woman in California who has contacts with shelters in Tijuana. Hipp is leaving Wednesday, Dec. 19, so hopes to have received all donations by Monday, Dec. 17.

She said she doesn’t understand the Trump administration’s efforts to keep the migrants out of the U.S.

“I am within the poverty line, and I have more stuff at my home than I know what to do with,” she said, adding that a country of such abundance should be able to make room for people with nothing.

Instead, “we’re going to tear gas them?” she asked incredulously.

On the ground at the border

Yellow Springs resident and Antioch alum Alex Rolland, an activist journalist who is making a documentary film about the migrant caravan, confirms the dire conditions facing the asylum seekers.

“People are understandably desperate,” Rolland said in a phone interview this week. “Mothers and their children, with only the clothes on their backs, don’t have a safe place to go.”

A founder of Renegade Media Collective, which formed during the Standing Rock action against the Dakota Access Pipeline, Rolland spent two and a half weeks at the border around Tijuana last month. After coming home over the Thanksgiving weekend, he headed southwest again Tuesday, Dec. 4, for an undetermined amount of time.

Having interviewed hundreds of migrants, he said the asylum seekers faced great dangers and depredations just getting to the U.S. border.

Rolland affirmed that the migrants are fleeing “highly impoverished living conditions” as well as pervasive violence, the two of which are often linked.

The violence is so prevalent, “they speak of it almost as an afterthought,” he said, “like, ‘Oh yeah, my uncle was kidnapped.’”

The migrants, whose “primary mode of transportation was walking,” came together in the so-called “caravan” for safety and support. Nevertheless most have been robbed at least once, while many were robbed “a couple of times” before arriving in Tijuana, Rolland said.

Some rides and aid were provided by residents of southern Mexico as the asylum seekers entered that part of the country, but deaths from falling off trucks led the government to ban the rides, Rolland said.

Then, what he described as “a lack of shelter capacity and will-power” prompted southern Mexican officials to put migrants on buses to move them further north more quickly.

That resulted, however, in migrants being dropped off in dangerous locations without food or water and in some cases simply being deported back to their home countries, Rolland said.

“They’ve passed through a variety of unforgiving climates, from hot sunny tropical jungle to freezing desert night conditions,” he wrote in an online post.

After reaching Tijuana, a bulk of the travelers were housed at a local sports complex, but the situation there became untenable.

“People were eating only once a day, Rolland said this week. There wasn’t enough water to go around, and people were suffering from dehydration.”

The complex was closed, but the local shelters couldn’t handle the numbers of people needing assistance, and camps were set up outside of the city. Medical clinics, too, began running out of supplies.

“There is a huge Mexican nationalist movement, and a lot of the rhetoric is very violent.”

He blamed nationalistic militia groups for instigating some of the scuffles and brawls that have broken out along the border, including the escalation that resulted in the border patrol deploying tear gas against migrants Nov. 25.

The Trump narrative describes the migrants as “criminals” trying to “invade” the U.S. But many civil and humanitarian rights organizations as well as faith groups agree that the migrants not only deserve humane treatment, but also have the right to seek asylum.

According to the U.S. Citizenship and Immigration Services section of the Department of Homeland Security website, the first step for seeking asylum in the United States is “Arrive in the U.S.” The second step is “Apply for asylum.”

Coming to the Tijuana port of entry, the largest such legal entry point along the border, is the legal means for seeking asylum.

Trump, however, has called their presence a threat, with Homeland Security supporting the president by claiming “our system is currently overwhelmed by unchecked mass immigration, particularly at our Southwest border.”

The American Friends Service Committee, a Quaker activist organization, among others, have countered that narrative.

“Border crossings are not surging and are near historic lows,” the group stated in announcing a nine-day initiative, “Love Knows No Border: A moral call for migrant justice,” from Dec. 10, International Human Rights Day, to Dec. 18, International Migrants Day.

An AFSC-led week of action begins Dec. 10 when more than 100 interfaith leaders plan to lead a nonviolent direct action at the border in San Diego. The group’s goals are threefold: “end the detention and deportation of immigrants, respect the human rights of migrants and end the militarization of the border.”

The local Quaker Meeting has not planned anything specific to AFSC’s week of action, but the congregation has been focusing on issues of immigrant and refugee justice, including exploring ways that Yellow Springs can support a sanctuary ethic.

The situation at the border needn’t be so desperate, Rolland said.

“In many ways this ‘crisis’ is very much artificial,” in that humane solutions are available,  Rolland said.

The Tijuana port of entry had been processing about 100 asylum requests a day until the arrival of the migrant caravan, when “reports indicated they were doing as few as 30,” Rolland said.

Rather than sending a military presence, the U.S. could have sent more people to work on processing entry requests.

In deploying tear gas over the border, among other violent actions,“we are violating Mexican sovereignty,” he said.  “We’re the bully on the block.”

The question we need to ask is whether “we’re comfortable gassing women and children” who are doing nothing illegal, he added.

“The moral fiber of our country is at stake right now,” Rolland concluded.

Student Marcel Vanarsdale is serving as a point person for a clothing drive hosted by the Antioch Creative Collective in collaboration with villager Cristina Hipp.

Collection boxes are located at the Coretta Scott King Center, the Olive Kettering Library at Antioch College and the Wellness Center through Friday, Dec. 7.

Matthew Morgan, an alumni and member of Antioch’s Board of Trustees, wrote a letter to the Antioch community this week describing his experiences visiting Tijuana last week, with the goal of promoting a connection with the college.

“This is a unique moment in time, and there are many possibilities, and ways to move forward,” he wrote.

“I experienced love, compassion, mercy, and a deep commitment to helping people, a great ongoing work to reducing suffering.”

She detailed her experiences in her blog, “thoughtsofapregnantvegan,” where she concluded: “We have an ethical obligation to bear witness to the injustices that occur in our names as U.S. citizens. We must show up, even if in fractured, brief ways that are constrained by our own (very different) lives.”

Those wishing to contribute to Cristina Hipp’s supply drive can contact her through Facebook Messenger, with items needed by Monday, Dec. 17. Those who want to give to the Antioch Creative Collective’s initiative can leave donations in boxes at the Coretta Soctt King Center, the Olive Kettering Library and the Wellness Center through Friday, Dec. 7. Anyone wishing to support Alex Rolland’s work documenting the migrant caravan have several avenues:  like and follow Renegade Media and consider donating online at donorbox.org/renegade-media-fund, PayPal.me/renegademedia, GoFundMe.com/documentingmigration or PayPal.me/alexrolland.