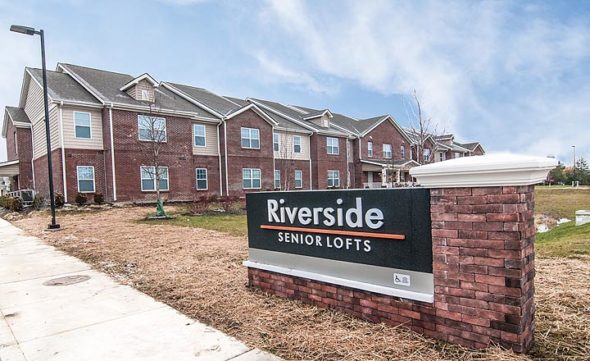 The grand opening of the Riverside Senior Lofts, a Dayton affordable senior housing project developed by St. Mary Development Corporation, took place Friday, Nov. 16. The project, shown above, includes 48 units, both apartments and cottages. St. Mary Development Corporation will also be the developer and property manager of the proposed affordable senior rental project in Yellow Springs, in collaboration with Home, Inc. That project would feature 54 units on 1.8 acres on Xenia Avenue, behind the new fire station and across from Friends Care Community. (Submitted photo)

Two weeks ago, at the grand opening of the Riverside Senior Lofts, a senior affordable rental project in Dayton, this reporter asked several Senior Loft residents, chosen at random, to weigh in on the apartments.

“I can’t say a bad thing,” said Lois Mathews, who moved to the new project in September after leaving the Trotwood house she had shared with her husband, following his death.

Mathews said she’s impressed with the quality of construction of the two-bedroom cottage she lives in. She’s new to living in close quarters with others and was worried about the noise level, since the cottage walls are attached. But her fears were unfounded.

She’s also impressed by the responsiveness of the maintenance crew.

“Yesterday there was all that ice,” she said. “They were right out here, taking care of it.”

The Dayton project is relevant to Yellow Springs residents because the Riverside Senior Lofts were developed, and are managed, by St. Mary Development Corporation, the Dayton nonprofit that will develop and manage the proposed Yellow Springs senior affordable rental project if the local project moves ahead. Riverside Lofts is a two-story structure with 48 units, while the local apartment would be a four-story, 54-unit building to be located on 1.8 acres behind the new fire station on Xenia Avenue, between Marshall and Herman streets.

Robert and Heather Albright, who have lived in the Riverside apartments for several months, also gave the project favorable marks. Robert, who is wheelchair-bound, said he couldn’t reach the shelf in their bathroom, so the maintenance man installed a lower one, at no cost. They are set to get a lower shelf in their walk-in closet as well, again at no cost.

Robert did have a complaint, however; the mailboxes to be placed out front of the units have been promised, but are not yet installed.

Living in the apartments since June, Mary Dieringer has been so pleased that she spoke at the opening ceremony. In an interview afterward, she said she’s been impressed by the design of the apartments, the quality of construction and the responsiveness of the maintenance crew.

“They come the same day you call them,” she said.

Overall, she said, she and her husband, who had looked all over Dayton for a place to live, “had a hard time finding something this nice, and also affordable.”

That responsiveness to residents and attention to quality are among the reasons that Home, Inc. chose St. Mary as its development partner, according to Home, Inc. Executive Director Emily Siebel in a recent interview.

“We were looking for an organization with integrity, that has a reputation of putting its clients first,” Siebel said. “St. Mary has that reputation of going above and beyond.”

In interviews this month, leaders at two Dayton nonprofits that regularly partner with St. Mary in providing client services were asked to describe their experience with the nonprofit.

“They’re always trying to do what’s in the best interest of the client. Their mission is to help people, not make money,” said Natalie Storms, director of social services at Senior Resource Connection in Dayton, which provides home care services. “They have an excellent reputation.”

Having partnered with St. Mary for five years, Samantha Brown of Home Products Health Care, an agency that provides products for those who are incontinent, also gave the nonprofit a high ranking.

“I would recommend them to anyone,” she said. “They’re wonderful at what they do, and they do it with passion and care.”

How it will work

Created in 1989, St. Mary Development Corporation grew from a partnership between a Catholic nun and a Centerville parishioner who met as members of a social justice committee of the Archdiocese of Cincinnati, according to the St. Mary website at http://www.stmarydevelopment.org. Within a few years, the two, eager to make something happen, had purchased their first site for affordable housing. Later, due to perceived need, they moved their work to the Dayton area.

Since then, the nonprofit has grown considerably, as St. Mary has developed 60 affordable housing developments in nine states and more than 4,000 units. The original founders led the organization for decades, until 2013, when Tim Bete, who had worked at St. Mary for seven years, assumed leadership.

Like most affordable housing developers, St. Mary provides property and financial management for its housing projects. But unlike the others, it also offers a third component, service coordination. While St. Mary does not provide direct services to its residents, it does connect residents with local, state or federal services for which they qualify. Doing so may provide seniors with resources they didn’t know they had, such as free meals delivered to the home or veterans’ benefits. The services free up more income for budget-squeezed seniors, and also allows them to live independently longer, Bete said.

For the Yellow Springs project, Home, Inc. will provide most of the service component of the new project, according to Bete and Siebel. It’s a new direction for Home, Inc., Siebel said, although the nonprofit is currently gearing up to provide service coordination for its first affordable rental project, the six-unit Forest Village Homes currently being constructed on Dayton Street.

Home, Inc. will be guided by St. Mary’s experience in coordinating services, she said.

“St. Mary has a strong track record in providing senior services,” she said. “They have the capacity and expertise to coach us.”

Most funding for the project, estimated to cost about $9 million, will come from the Low Income Housing Tax Credit program, a federal program administered by the Ohio Housing Finance Agency, if the project is successful in winning the funding. About 90 percent of affordable housing projects nationwide are funded by the tax credit program, in which private businesses purchase tax credits in exchange for funding.

Because of the tax credit program funding, the actual ownership of the project is complex, according to Bete and Siebel. For the first 15 years, the project will be legally owned by its investors, although few if any of them will ever show up on site. Rather, St. Mary will oversee development and provide management once the project is complete.

The private/public partnership yields a higher level of quality, according to Siebel, because the private investors provide an oversight structure.

“This is a tested program that works well,” Siebel said. “It brings the rigor of private business to the public good.”

The local project will also receive extra funding for partnering with St. Mary because the Dayton nonprofit is an official Community Housing Development Organization, or CHDO, a designated community-based nonprofit identified as having the capacity to develop affordable housing projects. According to Bete, there “are only a handful” of CHDOs in Ohio, and the partnership will bring in an extra $300,000 to the project.

Because the state oversees the tax credit program, the local project would adhere to state-approved building standards, Bete said. While the state requires that the project remain affordable for 30 years, that time period only relates to the project’s affordability, which organizers hope to maintain far longer. But that 30-year span does not relate to building construction, according to Bete, who said the aim for building longevity is far longer.

The project must also adhere to state environmental sustainability standards, Bete said. According to Home Inc.’s application to the Yellow Springs Planning Commission for a Planned Unit Development, or PUD, zoning overlay, the project intends to use high-performing equipment for heating and cooling, provide individualized controls in apartments for greater efficiency, and use enhanced insulation materials, among other sustainability strategies.

It’s too soon to know the exact figures for rental costs for the apartments, according to Bete, because total costs for the project are not yet clear. But typically, St. Mary affordable housing rental projects produce rentals that are 20 percent to 40 percent below market rates. In Yellow Springs, where rental rates are higher than in surrounding communities, the percentage of savings may be greater, he said.

According to the PUD application submitted by Home, Inc. to the Planning Commission, the rents for similar tax credit program projects in Greene County range from about $500 to $670 for a one-bedroom unit, and $600 to $800 for a two-bedroom unit. According to the application, after the initial rent is set, rents would likely increase about 2 percent per year.

Project organizers will submit their application for the tax credit program to the Ohio Housing Finance Agency in February 2019, according to documents, and receive word of whether they won funding in May. If the project goes forward, they hope to begin construction in spring of 2020, with residents moving in a year later.