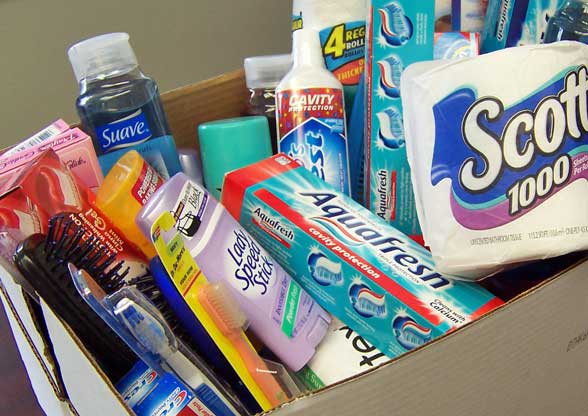 The ongoing tense situation at the U.S.-Mexico border and the critical circumstances of as many as 15,000 Central American people seeking asylum in the U.S. at the Tijuana port of entry — part of the so-called “migrant caravan” — is sparking deep concern among Yellow Springs residents who are spearheading humanitarian aid responses and working to raise wider awareness about the crisis.

Cristina Hipp, a teacher and mother of three, said that the knowledge of the migrants, many women and children, having mostly walked over the past months to get to Tijuana, owning nothing but the clothes they wear and living in uncertain and dire conditions, broke her heart. She said she couldn’t ignore it.

“I couldn’t imagine [celebrating] Christmas with all there is going on down there,” Hipp said last week.

She decided that her family would put their Christmas preparations toward gathering and delivering basic supplies for the people waiting to make their case for entry into the U.S.

She describes the decision as “impulsive,” but the idea stuck, and her determination to do something to help deepened.

Hipp said she started with the question: “If I had nothing, what would be the five things I really need?”

She decided to focus on basic hygiene and first-aid products, particularly feminine products.

“I was just thinking of how beat up they must be,” after months on the road, she said.

In her research about the migrants’ living conditions, she learned there is also a “huge need for diapers, wipes, baby formula and of course water.”

A newer need, as the asylum seekers wait indefinitely to meet with a border processing representative, is sleeping bags, tents and warmer clothes.

Another item she thinks could be helpful is warm, “cozy” blankets, especially for children. “There are a ton of the shiny emergency blankets down there,” but they aren’t very comfortable or comforting.

She also noted that people can also donate money or even Walmart gift cards — “there’s a Walmart in Tijuana” — if they’re comfortable with that. Donors can contact Hipp through Facebook messenger.

Hipp plans to drive the supplies to California herself, accompanied by her eldest daughter. They’ll be joined by a friend in New Mexico, and then meet up with a woman in California who has contacts with shelters in Tijuana. She’s leaving Wednesday, Dec. 19, so hopes to have received all donations by Monday, Dec. 17.

She said she doesn’t understand the Trump administrations’ efforts to keep the migrants out of the U.S.

“I am within the poverty line, and I have more stuff at my home than I know what to do with,” she said, adding that a country of such abundance should be able to make room for people with nothing.

For other local efforts concerning the Central American asylum seekers, and more information about the situation at the U.S.-Mexico border, see the longer Page One story in the Nov.6 Yellow Springs News.