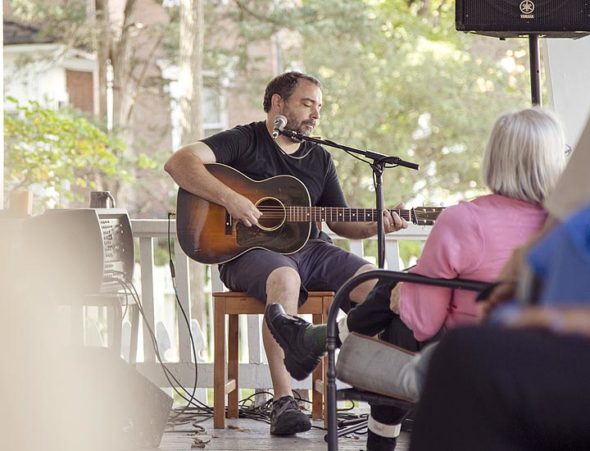 Villager Mark Babb is living in the past, at least musically. His influences are people like Blind Blake, Rev. Gary Davis, Leadbelly and Robert Johnson, from nearly a century ago.

Tapping these roots, Babb recently released his first solo album, “Rock That Cradle.” It’s a collection of songs originated by pioneering folk and country blues guitarists played in traditional fingerpicking style on acoustic guitar, with no other instruments.

Titles like “Red Rocking Chair,” “Police Dog Blues,” “Arkansas Traveller” and “Keep Your Hands Off Her” fill the album.

“These are the songs I’ve been playing for years,” Babb said in a recent interview. “These are the ones I love. None of them are original, but they’re my arrangements.”

The album includes two songs by Blind Blake, who had an innovative ragtime style. It also has three songs by country blues guitarist Rev. Gary Davis.

“He’s the master. He’s the one I try to learn. His stuff’s really hard to play, and I’ve spent years trying to get stuff off the old records,” Babb said.

Most of the music dates back to the early 20th century, although he includes one song that’s relatively new — from 1975. “Buckets of Rain” from Bob Dylan’s landmark album “Blood on the Tracks.”

Babb started piano lessons when he was just 6 years old, but later moved on to his instrument of choice.

“I quit piano after about six years, and my mother was sort of devastated,” Babb said. “‘You put a lot of time into this, and you’re just going to quit?’”

So his mom went out and bought him an electric guitar, told him “here, give this a try,” and that sealed his fate. From the electric guitar he found his way to acoustic.

“I just love the simplicity of acoustic guitar,” he said. “I play vintage Gibsons from the ‘30s and ‘40s, and it’s a perfect sound to me.”

Continuing the traditions
Babb got into traditional music while in college at Kent State University.

“They had a folk festival every year, and that’s where I caught the bug,” Babb recalled. “It was amazing, just being exposed to all kinds of American roots music, and I just absolutely fell in love with it. I’ve been playing it ever since.”

At the time, Babb still played some piano, and he had learned to pick a banjo in the clawhammer style. But what he liked most was the sound of fingerstyle guitar.

In fingerstyle or finger picking, rather than strumming, the strings are individually plucked with the fingers for melody and the thumb is used for the bass notes, along with other nuances such as “hammering” strings on the fretboard, and striking the body of the guitar for percussion.

“I just thought it was wonderful. I’m going to do anything to be able to play like that,” Babb recalled. And he knew it would require practice — lots of practice.

The songs on the new album were recorded locally at SoundSpace studio on Dayton Street, with owner Chris Hertzler handling the recording. Babb appreciated Hertzler’s equipment and expertise.

“He’s got some wonderful old microphones, a nice space, and it was a real luxury to have someone else at the controls,” Babb said.

In another nod to traditional music, all the recordings were done in single takes, without overdubs or edits. For him, it was more a matter of necessity than philosophy.

“I can’t really separate it. I would get lost playing a song without singing it,” he said.

Asked if it was recorded with analog or digital equipment, Babb said it was digital, but that the difference is not as stark as it used to be.

“I dare anyone to really be able to hear the difference,” he said.

Babb is such a believer in digital music that he did not make CDs of the new album. Thanks to the availability of music online, he didn’t feel he had to.

“It used to be you’d get tapes or compact discs. Now, [with digital] you can get anything,” he said.

“Rock That Cradle” is available for purchase on iTunes and Amazon Music, and can be streamed on Spotify.

By day, Babb is a well known criminal defense attorney in Fairborn with offices just off Dayton–Yellow Springs Road near Interstate 675.

He had considered going into music professionally, but feels he made the right decision pursuing law instead and thus earning a steady paycheck.

“There are very few working musicians who pay their mortgage playing music,” he said. “Either you have millions, or you have a day job. People who are way more talented than me, they have day jobs. It’s just the nature of it.”

With music as a “side hustle,” Babb does have a steady gig playing guitar. He’s playing every Friday from 6 to 9 p.m. at the Woodhouse Kitchen and Bar in Mason, Ohio.

“Have guitar, will play,” Babb said.