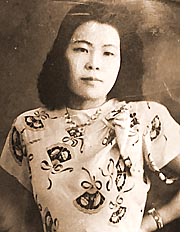 Kume Tsukamoto Benning, of Yellow Springs, passed away on Friday, Jan. 4, 2019, at her home in Cincinnati, Ohio. She was 98 years of age.

Born Nov. 14, 1920 in Yokohama, Japan, she was the daughter of Chiozo and Tsume Tsukamoto. After high school, Kume went on to receive her degree in mechanical engineering and started working for Nissan Automotive. She completed course work in machine engineering at Nissan, where she drew parts until the conclusion of the second World War. During this same period, Kume received her Master Seamstress Certificate. In 1949, following her employment at Nissan, she began a new job working for the United States Army Reserve, during which time she met her husband, Reginald O’Neil Benning, of Yellow Springs. Reginald and Kume were married in 1951 in Tokyo, Japan, and had their first son, Richard, in the same year.

In 1952, Kume came to the United States with their son, Richard, while expecting their second child, a daughter, Sachi. Kume, speaking very little English, managed to find work, save enough to buy a car, and put money down to build their family home on Marshall Street. Most people got to know her while she worked at Joe Holly Cleaners, handling all the alterations. She remained an employee there for seven years, but occasionally helped Mr. Holly long after leaving her position. In 1956, she gave birth to their second son, Dorian, soon followed by the birth of their second daughter, Gina, in 1957. Their last child, Tim, was born in 1961.
In 1998, Kume retired from Yellow Springs Instrument Company after 25 years assembling electrical components. Following her retirement, Kume often times helped her family, friends and neighbors with clothing alterations, continuing her occasional work with Mr. Holly, and worked on small house repairs, never giving up her passion for engineering.

Kume was preceded in death by her family in Japan, including her parents; her brother, Chizo; her three sisters, Mitus, Hana and Yaia; three nephews and two nieces; and by family in the United States, including her husband, Reginald; his parents, Charles and Helen (Cassell) Benning; brothers-in-law Chester Jr., Andrew and Donald; sisters-in-law Margurite (Simmie) Ragland, Margetta (Bonnie) Benning and Ernestine (Charles) Benning; and several nephews and nieces.

She is survived by her loving family, including her three sons, Richard (Susan) of Franklin, Ohio, Dorian (Jennifer) of Dayton, and Tim of Xenia; two daughters, Sachi of Fairborn, and Gina of Cincinnati; as well as 16 grandchildren, 21 great-grandchildren, and two great-great-grandchildren; and a host of nieces, nephews, and cousins.

An open memorial service will be held in the Yellow Springs High School cafeteria on Saturday, Jan. 12, from 4:30 to 7:30 p.m. Everyone is welcome to attend.