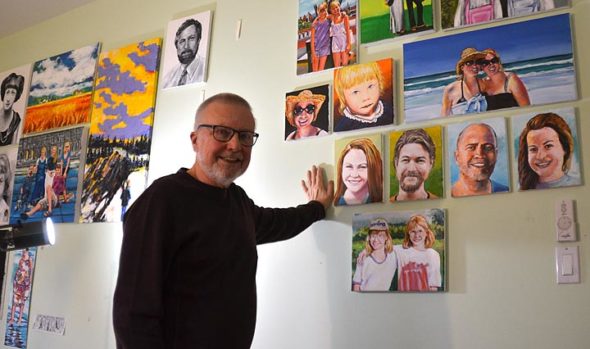 Local artist Tim Potter, shown here in his home studio with his portraits of family members in the background, will show about 50 portraits of villagers at The Winds Café this month and next. An opening reception for the exhibit takes place Sunday, Jan. 27, from 4 to 6 p.m. (Photo by Diane Chiddister)

Portraits of villagers at the Winds

Villager Tim Potter worked long and hard for three decades building a school of design in Dayton, some weeks putting in 60 to 80 hours. His school grew from 29 students in one room with himself as the only teacher, to 135 students, 35 employees, and a national reputation as one of the top design schools in the country. But after so much focus on growing the school, Potter wasn’t sure, when he retired eight years ago, who he was anymore. When his wife, Linda, asked him what he’d do next, he didn’t have an answer.

“When I left the business, I thought that’s who I was,” he said in a recent interview. “I thought I had no other identity.”

But Potter ended up surprising himself, as well as his family, by picking up the paintbrush he’d put down years before. The answer to the question of what Potter would do next will be on exhibit this month and next at the Winds Café, where he is showing about 50 portraits he’s painted of Yellow Springs residents.

The show, “Villagers,” will be on display through the end of February, with a reception for the exhibit from
4 to 6 p.m. on Sunday, Jan. 27.

The exhibit is the culmination of a four-year project, Potter said. Its subjects include a mix of people he knows well and those he didn’t know at all before painting them. And it was important to him to include those from all stages of life.

“The joy of getting older is that you see beauty in all ages,” he said.

The idea of painting portraits of villagers was sparked by two factors, Potter said. Four years ago, Potter’s brother, who lives in Minnesota, sent him a newspaper story about a St. Paul artist who made a project of painting portraits of his neighbors. At around the same time, Potter’s daughter, Elaine, noted that while he is very generous with his family, he doesn’t often reach out to others.

“I put those ideas together and decided to do something,” he said.

What Potter decided to do was to paint his neighbors on Stewart Street, where he lived at the time. He had enjoyed painting in high school, but then in college veered into design, before following a career as a graphic designer and then launching the School of Advertising Art in Dayton. But newly retired, he had taken up painting again, starting with pictures of his wife, then his daughters, then his grandchildren.

Still, the project pushed him beyond his comfort zone. An introvert, Potter didn’t find it easy to go from house to house to offer to paint people’s portraits, even though he was offering a portrait for free.

“Introducing myself and going out on a limb was not my personality. It took some effort,” he said.

But Potter did push himself, and ended up painting neighbors Neenah Ellis, and Don and Linda Mapes, among others. He further extended himself by raising money for the Antioch School, which his grandchildren attend, by offering original portraits at the school’s annual auction. And he painted portraits of several Antioch School teachers, including Brian Brogan, Ann Guthrie and Sally Dennis, along with personal friends such as Roger Beal and Kristin Andreae.

Next, Potter pushed himself further by venturing into downtown Yellow Springs. The Winds show includes paintings of Gilah Pomeranz and Shep Anderson of Yellow Springs Hardware, Jamie Sharp of the Yellow Springs Toy Company, Jane and Dennis Nipper of Nipper’s Corner, Erica Heaton of Yellow Springs Chiropractic, several servers and hosts from The Winds Café, and downtown personalities, such as Walter “The Captain” Rhodes, among others. (Full disclosure: this writer was among those painted.) Some people Potter asked turned him down, some seemed perplexed by the request, and some said, why not? The request for portrait permission wasn’t time consuming: Potter needed only a photo, and then worked in his home studio creating the portrait.

Each portrait takes about eight to 10 hours, Potter said. He begins by looking closely at the photo, which he first enlarges. He then uses crayons to draw the face, focusing on the eyes. Each face is a different combination of shapes, and he works to get the shapes right. Then he mixes his acrylic paints to get the right skin tone. Potter comes back to the face to add light, then shadows, working an hour or two at a time. And when his first efforts don’t work, he throws them away and starts over.

It’s an expensive hobby, with each portrait costing $50 to $80 in materials alone, Potter said. And he gifted each to the person he’d painted, then borrowed the portrait back for the show.

His experience as a graphic designer helps when evaluating his efforts, according to Potter.

“Graphic design is a process where you keep making mistakes and fixing them until you get what you want,” he said.

Does he feel like he knows his subjects when he’s painted them?

In a way, Potter said.

“Pretty much all the life a person has lived is on the face,” he said. “It tells you who the person is. It’s all there.”

Art is a family affair for Tim and Linda Potter. Tim Potter has been making art since he was a child, when his mother was a fashion designer for the Rike’s department store in downtown Dayton. Linda’s father was an illustrator, and the couple’s daughter, Elaine, who graduated from her father’s school, teaches art in Troy.

When Tim Potter was asked, in high school, to begin thinking about his future career, nothing but being an artist made sense, he said. So after high school he attended a small commercial art school in Cincinnati. Right out of college he got a job at a Dayton ad agency, then moved to Chicago to work in book design at Rand McNally. He and Linda, who were both raised in Dayton, wanted to be closer to their families, so they moved back to the Dayton area, where he got another ad agency job. But working in an ad agency wasn’t fulfilling, so Potter began casting around for another art-related career.  Starting a commercial art school seemed like a good idea.

“I thought it would be easy and make a lot of money,” he said with a smile.

But the easy part didn’t work out, nor did the money part, at least for a while. At the beginning, Tim’s colleagues at the ad agency would cover for him while he went to area high schools to pitch his new school. When he had enough students, he rented a room and began teaching.

He had one file cabinet with a phone on top.

“For a year the phone didn’t ring,” he said.

But he kept visiting high schools to recruit students, and after a few years he had 70 students in six rented rooms. Years passed, and the school kept growing, with help from Linda, a social worker, who pitched in on the business side. The couple was able to cobble together enough loans to build a new building, and growth continued. When Potter retired in 2010, the School of Advertising Art had 135 students and 35 employees. In recent years, the new owner has added on to the building and expanded the program into a four-year school. Now called The Modern College of Design, the school was named last year as one of the top 40 design colleges in the country by Graphic Design USA magazine.

Tim Potter is proud of the school he’s created, and leaving it wasn’t easy. But his new work as a painter has changed him, he said. As a designer he focused on the project before him, and as the head of the School of Advertising Art, he focused on growing the school. But now he’s slowed down and is looking more closely at the world around him.

“Shifting from being a designer to a painter requires a lot of looking I’ve never done before,” he said. “It makes you appreciate things.”

Especially, he appreciates faces, of all ages and all kinds of people. And he’s looking forward to sharing with others the faces he’s painted of the people of Yellow Springs.

One Response to “Portraits of villagers at the Winds”