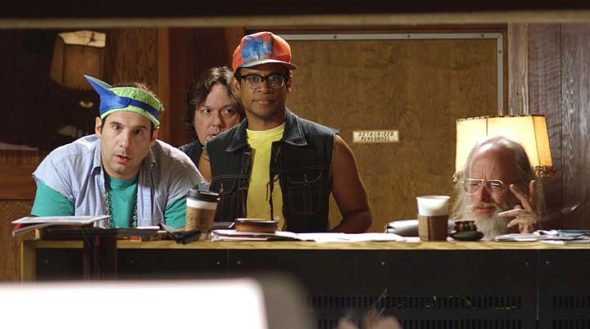 Review: Let’s hear it for the ‘Boyz’

There’s a lot that’s inherently ridiculous about boy bands, particularly the brand of all-but-factory-produced male vocal pop groups who dominated the Disc-Man in the late ‘90s and early aughts. There were the repetitive synth chord progressions, the choruses filled with “baby”s and “girl”s, the endless hair gel. Mostly, though, when looking back, it’s that the songs the bands sang seem irrevocably cemented in the time in which they were popular.

All of these things — but particularly that last one — are fodder for villager and director Joel Levinson’s feature-length comedy film “Boy Band,” which had its Yellow Springs debut on Saturday, March 2, at the Little Art Theatre. The film was written by Levinson and his brother Stephen, a duo well-versed in short-form comedy for the web.

“Boy Band” was filmed in 2016 and follows the fictional Heartthrob Boyz, a boy band who have been stuck in a recording studio for a couple of decades trying to record their second album. As the years rolled by, the Boyz got older, and the world outside changed, but they’re still plugging away, still writing songs about teen love — still, in fact, wearing the same outfits.

The film is, among other things, a bit of a comedic study in archetypes. The Boyz have distilled their identities down to what they feel are the essential parts: Johnny (Steve Agee) is The Heartthrob, Lance (Seth Herzog) is The Cute One, Henry (Jordan Carlos) is The Bad Boy and “The New Guy” (Dave Hill) is … The New Guy.

Levinson is particularly interested in archetypes — he told the News the day before the film premiered that he’s been exploring a personal theory of comedic archetypes that appear on stage and screen.

“I’m still trying to figure it out, but the simple version is that there’s always a Straight Man, a Boob, an Asshole and a Slut,” he said. “The best example of it is ‘The Golden Girls’ — Bea Arthur is the Straight Man, Estelle Getty is the Asshole, Betty White is the Boob and Rue McLanahan is the Slut. What it means is that, when you drop a new piece of information into the story, you sort of know how each one of them is going to react.”

Within the film, as the Boyz explore their self-imposed archetypes, and try to challenge them, they also adhere to Levinson’s theory, with Henry as Straight Man, Lance as Asshole, New Guy as Boob and Johnny as Slut. These roles inform how each individual interacts with the others, and how they react to the second-act revelation that — spoiler alert! — the world is literally falling apart outside their studio for mysterious reasons.

Nevertheless, the band persists. And the film — with score and songs all written by Levinson — reminds viewers constantly that a group of 40-ish men singing songs about holding hands at the mall and kissing on the school bus is absurd, grotesque and, frankly, creepy. Teen love songs — like the teenage years themselves — can only be relevant to their singers, and their original audience, for so long. What will it take for the Boyz to become men?

“It’s like when you hear The Who singing ‘Talkin’ ‘Bout My Generation,’” said Levinson. “They’re basically saying, ‘We’re not going to listen to anybody over 27. It’s really ridiculous.”

These things are the comedic core of the film, but it’s also punctuated with surreal, out-of-left-field punches that Levinson considers particular to his sense of humor — but also to the restrictions of the film’s budget, which the Dayton Daily News reported was around $125,000.

To that end, the movie takes place mostly in a recording studio, shot in Kettering, and begins to feel more and more claustrophobic as the Boyz race the clock to finish their album — they’ve got until 4 a.m. to wrap it all up before they’ll be kicked out. There are occasional cuts to the outside world and the unexplained (until the end) carnage that’s wreaking havoc out there. Local viewers might recognize the Dayton Art Institute in a few scenes with Johnny’s long-suffering (and enabling) wife Tina, played by Esther Ku. There are also a few scenes, which feature fun cameos, that were shot quickly outside of Ohio.

Locals might also notice the band’s recording space littered with the familiar blue cans of Warped Wing Brewery’s Trotwood lager, and they order Cassano’s delivery from a pizza slinger (comedian Julie Goldman) who just wants the Boyz to pay her already so she can endure the apocalypse in peace.

Within these restrained environs, the movie takes its jokes and sprints ahead with them, to destinations perhaps unforeseen by the casual audience member. An early scene with an unexplained puppet accountant (voiced by an actor whose particular timbre is immediately recognizable) is an indication of the kind of movie you’re watching. There are also the frequent breaks from reality taken by the band’s sound engineer, played by Dave “Gruber” Allen, performed in melancholy song in a black space with a spotlight. And, of course, the aforementioned ever-mounting apocalypse.

Levinson concedes that the film might not be to everyone’s taste — “Some people might watch it and say, ‘What is this? Why is this happening?’” he said — but after working on the film for two years, he’s made peace with that, particularly after watching a commencement speech given by Denzel Washington.

“[Washington] said, ‘You have to fail big — you have to try things that are big enough to know if they fail.’ So this is that,” said Levinson.

“I’ve made a lot of short videos for the internet, and people can like it or not like it — but this, if people don’t laugh, then I have a failure on my hands. And that’s okay,” he added. “I’m really happy that I gave it a shot and put something out there in the world that’s big enough to either succeed or fail.”

Perhaps a marker of a successful product, though maybe not the intended one, is that the Heartthrob Boyz’s Levinson-penned hit — “When I page 911, it means I need you now/so head outside now, and find the nearest pay phone” — has been stuck in this writer’s head for days.

“Boy Band” is available now on iTunes and Amazon.