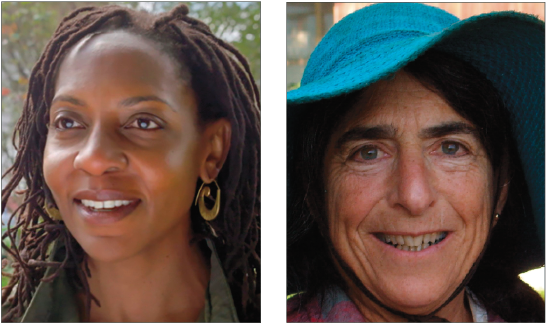 Onika Abraham, left, a farmer and educator who runs Farm School NYC, and Elizabeth Henderson, right, a pioneer of the Community-Supported Agriculture movement, and are the keynote speakers at this year’s Ohio Ecological Food and Farming Conference, at the Dayton Convention Center Feb. 14–16. Several Yellow Springs residents are also participating as workshop leaders and exhibitors. (Submitted photos)

“Deserts are naturally-occurring, but there is something very unnatural about a food desert,” Abraham said in an interview this week. “It’s a political and economic reality because of policies and legacies of discrimination. You can’t change it just by putting food there.”

“Food apartheid gets more to this idea that it is a political construction,” she said, pointing to the disparities in how resources have historically been allocated.

Abraham, who runs Farm School NYC in New York City to train farmers in both growing food and leadership, is at the forefront of what shes calls the restoration and reclamation of the role of people of color in food and farming. Acknowledging and celebrating that history is critical to moving forward, Abraham says.

“So many of these techniques we use as sustainable growers are rooted in indigenous practices throughout time.”

Abraham will share her vision for food justice during a keynote talk at the Ohio Ecological Food and Farm Association’s 40th annual conference, Feb. 14–16 at the Dayton Convention Center. Online registration ends Jan. 28.

Through this year’s theme, “Just Farming: The Path Before Us,” conference sessions will cover the urgent need to not only grow food more ecologically, but also to address the longstanding inequities in our food system.

OEFFA is a statewide organic farming education and advocacy group based in Columbus.

Abraham’s Farm School NYC has trained more than 200 people through its programs. They have gone on to work in their communities on issues at the intersection of social justice and agriculture.

“We want people to go back to their communities and seed these concepts, not just the aspects of sustainable agriculture, but of protecting the people and protecting the earth,” Abraham said.

To CSA pioneer Elizabeth Henderson, the conference’s other keynote, it is critical that food justice focus on how those who grow our food are treated.

“Food justice to me means everybody gets to eat healthy food as a human right. We also need to have a system that supports those who grow the food,” she said.

Farmers and farm workers, Henderson says, deserve to make a decent living and “live in dignity.” Currently, a staggering 84 percent of family farms are only surviving because of a household member’s off-farm income, she said, citing USDA statistics.

“People are supporting their farming because they love doing it.”

To Henderson, who co-authored the seminal book, “Sharing the Harvest: A Citizen’s Guide to Community Supported Agriculture,” the money that could be shared with farmers is now funneled to the largest food producers and retailers, who make huge profits. By contrast, “local food sovereignty” means that local farms and independent food stores thrive.

Henderson also sees a role for “regenerative, organic, sustainable agriculture” in the Green New Deal being proposed by some progressive politicians, and hopes that agriculture changes are part of that plan.

“Because organic farms are building soil, we need to double down on our efforts,” Henderson said in regards to climate change action. “Everything we do counts and we don’t know when the tipping point will be reached.”

Antioch College is participating in several ways. For one, Beth Bridgeman, Antioch Instructor of Cooperative Education, will also present a workshop during the conference on “Seed Sovereignty: How to Save Seed and Why You Should.”

Bridgeman will look at the history of seed patenting and seed law, seed-saving methods and building community around seeds, according to her workshop description.

“Seventy-eight percent of the world’s commercial seed is now owned by three companies, and up to 97 percent of genetic diversity has been lost since 1900,” Bridgeman noted in her workshop description.

In addition, Antioch Farm Manager Kat Christen is coordinating the kids conference at OEFFA this year, where the kids will participate in a variety of educational activities, including some with live animal friends. Antioch instructors Amy Osborne and Forest Bright will also lead workshops for youth, Osborne on pollinators and Bright on vegetable printmaking.

Susan Jennings of Community Solutions is looking forward to the event and also to continuing to collaborate with OEFFA on statewide and local policies to promote regenerative agriculture.

“There is an opportunity to be on the forefront of healthy soils policy,” Jennings said. “My vision is Yellow Springs could help to spur changes in surrounding municipalities.”

To Lauren Ketcham, communications coordinator for OEFFA, the organization’s 40th anniversary is an opportunity to celebrate its history along with the history of agriculture. That led to an orientation towards food justice.

“We feel that acknowledging the roots of agriculture and considering the ways in which injustice permeates it is essential to forging a path to a more just food system,” Ketcham said.

Looking back at the organization’s history, Ketcham noted that when OEFFA began in 1979, there were no federal organic standards, while organic was seen as a dirty word.

“When we started, our founding members were responding to the chemical intensive agriculture at the time. Folks were discounted who were attempting to farm in ecological ways,” Ketcham said.

Today, however, organic is the fastest growing segment of agriculture, Ketcham said. OEFFA’s mission is now more oriented to “maintaining the integrity of the organic label,” and pushing for other, more holistic changes in farming.

For instance, OEFFA also now focuses on supporting young farmers, as the demographics of farming continue to skew older. Those young farmers are leading the way to change, she said.

“The overall farming population is aging, but when you look at organic and sustainable farms there is a ton of leadership happening from young folks,” Ketcham said.

Online registration ends Jan. 28. To register, visit http://www.oeffa.org. There will also be on-site registration, but some sessions may no longer be available.