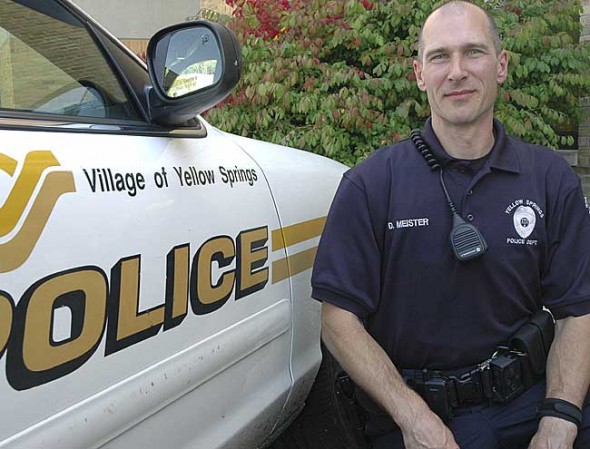 Yellow Springs Police Officer David Meister faces possible termination after Village administration alleged he may have violated policy by not responding to a fatal shooting in the village last month.

The Village is looking into whether Meister — who had gone off duty but was still at the station — should have accompanied the officer on duty to the scene of a shooting on Dec. 13, 2018.

During the call to a downtown apartment, Officer Paul Raffoul found that resident Kenneth Livingston had died of a gunshot wound to the head, which witnesses have said was self-inflicted and accidental. A cause of death, however, has yet to be officially announced.

In a letter to Meister on Jan. 9, Village Manager Patti Bates wrote that by not responding to the scene, Meister is alleged to have violated the Yellow Springs Police Department policy, Guidelines for Village Policing and YS Personnel policy.

“By failing to respond to the scene of the shooting, you failed to ensure the safety of others, and innocent bystanders, and to potentially prevent further injury,” the letter states.

“You also potentially failed, as a trained EMT, to render potentially life-saving assistance to the injured person,” it continues.

Meister also may have violated several policies related to safety and was possibly negligent in his duties as a police officer to ensure public safety, Bates’ letter states.

Meister said in an interview this week that he didn’t go out on the call because he was not authorized by a supervisor to do so. Meister worried that he would be disciplined if he went, saying he was particularly cautious after his demotion from corporal to officer last fall as part of a prior discipline.

“I would be violating numerous policies if I were to take independent action when I’m not on duty,” he said. “I’m trying to be very careful.”

Although Meister said he did not explicitly offer to accompany Raffoul on the call, he would have gone if he were asked by the patrolman. Before Meister left, he confirmed that YSPD Sgt. Knapp was en route along with the Miami Township Fire and Rescue squad, and that earlier reports of a murder suspect at large were not accurate, he said.

“It sounded like things were contained,” Meister said. “There were false reports that were determined quickly to not be true.”

On the night of Dec. 13, 2018, between 10:27 p.m. and 10:35 p.m., several reports came in to the YSPD and Xenia/Greene County Central Dispatch about fireworks, an armed suspect driving away from downtown in a black Volvo and a self-inflicted shooting. By 10:37 p.m. YSPD had confirmed that the reports about the black Volvo were unsubstantiated and requested the coroner.
Meister said he does not recall the exact time of his departure, but that he later went to the home of a family member of the victim — who was a neighbor — to offer comfort. He also expressed sadness that he was unable to help on the scene.

“I desperately wanted to go out and help the night Ken died,” Meister wrote in a follow-up message. “He was a neighbor and a friend and I would have loved to have been there to assist in this crisis.”

Meister said he would be requesting a pre-disciplinary hearing from the Village, but he had not done so by press time.

Meister faces discipline “up to and including termination,” according to Bates’ letter, a quote from Meister’s recent internal discipline in October.

“You should be aware that any further violations of policy or failure to ensure the safety of citizens will result in further discipline,” that previous disciplinary letter also states.

Meister was demoted and put on a six-month performance improvement plan after an investigation concluded he violated department policy in two incidents last year by not ensuring public safety. Meister, the only full-time officer who lives in the village, received an outpouring of local support during that investigation.

Village Council weighed in on the matter this week, writing in a statement:
“The paramount duty of all our police team members is to ensure that the public and their fellow officers are safe at all times. Any failure of an officer to protect the public and co-workers must be investigated.”

In an interview, Council President Brian Housh said he found Meister’s behavior, even if unintentional, “problematic.”

“We are very concerned with what we think is no question that Meister was not acting with a safety-centered mindset,” Housh said of Council’s perspective.

Council member Lisa Kreeger said that she was “shocked and dismayed” to hear about Meister’s actions on the night of the shooting, which could have threatened the safety of both citizens and his fellow officers.

In addition, Kreeger said that overtime rules are not relevant and that Meister could have helped even if he didn’t technically go back on duty.

“You act first. You assure the safety of the public and fellow officers first,” Kreeger said. “If there are any issues around on or off the clock, that is a whole different question.”

According to Bates’ letter, Meister allegedly violated the YSPD policy manual’s Code of Ethics section, stating law enforcement officers have a duty to “safeguard lives and property.” In addition, he also may have violated the Guidelines for Community Policing, specifically the guideline about being “safety-centered.”

“Safety is the primary need identified by the Yellow Springs community members with regard to police services,” the Guidelines for Village Policing, passed in 2017, states.

“By failing to respond to the scene of the shooting … you were negligent in performing your obligation, as a peace officer with the Village of Yellow Springs, to ensure the safety of the public,” Bates wrote in reference to the policy.

Bates wrote the most recent letter to Meister a few days after receiving the findings of an outside investigation completed by the Clark County Sheriff’s Office. The Village declined to release that document this week, citing the ongoing nature of the disciplinary matter. Bates launched the investigation on Dec. 14.

Although the Livingston shooting is believed to have been accidental, police are still investigating the incident as a possible crime, according to the Village. Police are waiting for a ruling on Livingston’s cause of death as well as toxicology results from the Greene County Coroner.