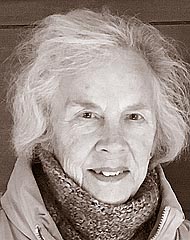 Carolina Carpenter died peacefully at Friends Care Center in Yellow Springs on Feb. 4, 2019. She was 74.

Carolina was born on March 30, 1944, in Amsterdam, the Netherlands, the third of six children. She attended Montessori School in Amsterdam as a child, meeting Maria Montessori when she visited her school. This would prove to be a harbinger of her life. Her family emigrated to the United States in 1951, settling in Bellaire, Texas. Carolina enjoyed a stable and carefree childhood in Texas, forming a lifelong love of horses, riding the Salt Grass Trail on her horse, Cinnamon, and lots of family travels exploring the country with her parents and siblings. This would also prove to be a harbinger.

Carolina followed her sister to Yellow Springs to attend Antioch College. It was there she met and married Eric Libby. Their son, Brian, was born in 1967, followed by another son, Mark, in 1969.
After graduation, Carolina was faced with single motherhood and was reintroduced to her Antioch chemistry professor, Dick Carpenter. They hit it off and were married on March 23, 1971, in Santa Monica, Calif., beginning a love affair that lasted over 47 years. With the addition of Dick’s children, Kathy, Lynn and David, the family was complete.

Dick and Carolina shared a love of exploration and travel. Dick’s enthusiasm and planning combined well with Carolina’s background and travel skills. They embarked first on epic road trips in their 1966 Chevy Biscayne, aka the Beige Bomber, traveling out west with the kids. Later in life, they used Carolina’s dad’s home in The Netherlands as a home base for international travel to over 47 countries. They also loved visiting family and friends throughout the world, attending graduations, weddings and other family events.

Following financial troubles at Antioch College in the late 1970s, Carolina and Dick moved to Kalamazoo, Mich., in 1979, where Dick began work at Kalamazoo College. Carolina immediately launched her own career in Montessori, forming the Montessori Children’s House in Kalamazoo. It was a labor of love and she influenced generations of children through her school.

One Christmas in the late ’80s, Dick gave Carolina a recorder as a gift. She took to the instrument immediately, resulting in another labor of love: playing music. Always musically inclined, she taught herself to play and joined the Kalamazoo Recorder Players, as well as a smaller ensemble group called Wind Works, playing with both for many years.

After 37 years in Kalamazoo, Dick and Carolina moved back to Yellow Springs in early 2018 to be closer to family.

Unfortunately, their time back in Yellow Springs together was not to be long, with Dick’s death last year. They were great partners in marriage and travels, and will both be sorely missed.

Carolina will always be remembered for her wit and her intelligence, as well as her love of life, travel, people, friends and family. She was a wonderful wife, sister, mother and friend.
In lieu of flowers, the family asks that donations be made to the Glen Helen Nature Preserve in Yellow Springs. Please join the Carpenter/Libby family for a celebration of life for Carolina on her birthday, Saturday, March 30, at the Mills Park Hotel Banquet Hall, from 11 a.m. to 2 p.m. Lunch will be served. All are welcome.

Condolences may be expressed to the family by visiting http://www.jacksonlytle.com.