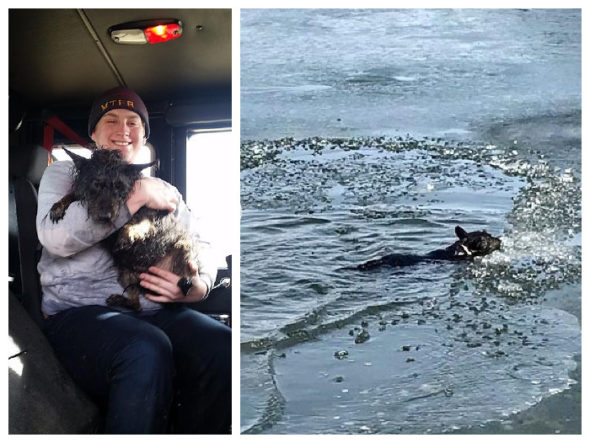 Firefighter/EMT Nick Miller-Jacobson warming up with rescued dog, Sissy, who, at right, is shown struggling in the frozen pond. (Photos by David See)

Monday, Feb. 4, was a beautiful sunny day, with temperatures in the 50s. Around 11 a.m., motivated by the unseasonable weather, David See decided to wash his Jeep’s floor mats, so he took them behind his house on Clearcreek Trail in Bath Township to hose them off. He happened to look at the half-acre pond —  still mostly iced over — about 50 yards back on his four-acre property.

See noticed a new hole in the ice, but with something black moving in it. At first he thought it might be a duck or goose, but moving to take a closer look, he saw a black dog had broken through the ice.

“Poor little thing was hanging on the edge of the ice, whimpering and shivering,” said See. The dog was trying to climb out of the water, but was unable to, the edges breaking off under its paws.

See found his hip waders, put them on and approached the ice.

“I tried to figure out if there was any way I could get out there, but I couldn’t.”

He tried to calm the dog by talking to it, and it seemed to be clinging to the edge of the ice fairly well.

“I love dogs more than anything.” See said he decided that if the dog went back under water before help arrived, he would go in to save it.

Fortunately, the Miami Township Fire-Rescue squad arrived at his home within about ten minutes, by See’s estimate. The engine crew of Firefighters/EMTs Ryan Evans and Alex Wendt were first on the scene,  assessed the situation and called for additional resources. A rescue unit with Chief Colin Altman, Firefighter/EMT Nick Miller-Jacobson and Intern Jonas Robin arrived soon after. They set up safety lines and went to work.

“The dog looked like she was in a dire situation, so we had to act quickly,” said Miller-Jacobson. The dog continued to struggle at the edge of the ice.

See remembered his son kept a kayak in the barn, so he brought that down to the pond. Miller-Jacobson and See walked the kayak across the solid ice to the water, and Miller-Jacobson got in the kayak.

“Nick reached down, and got her, and they pulled him out with the rope,” said See.

The terrified terrier’s tag identified her as “Sissy” and had the owner’s phone number on it. The squad quickly took Sissy to the rescue unit and began to dry and warm the dog back to normal. She appeared to be uninjured, and soon the owner had been reached by phone.

The owner explained that around 8:30 a.m. that morning, their three dogs had gotten loose from their yard, which is in Fairborn, roughly two miles away from See’s property. The owner was out searching for the dogs when they received the call about Sissy.

The owner was soon reunited with Sissy and thanked the squad and Mr. See. The owner then resumed the search for their other two dogs, who were located soon after. All are now safe and sound.

See said that when he called 911, he wasn’t entirely sure who would show up, but was impressed by the squad’s quick response time and their handling of the situation.

“The board of trustees for Bath Township decided to seek alternate services,”  Altman said.

Bath Township had been part of the Fairborn service area for around 40 years, but Fairborn was planning to almost double the rate they were charging for emergency services, according to Altman. Bath Township ended up dividing services between the Miami Township, Bethel Township and Beavercreek fire departments.

Chief Altman noted that since adding the new service area to their jurisdiction Jan. 1, the station has seen an increase in the number of calls they receive, but the volume is comfortably within their service capacity.

Altman also joked that Miller-Jacobson was now their “official dog rescuer.” Two years ago, he and Ryan Evans rescued another dog, from Clifton Gorge, having to rappel about 50 feet down the steep walls of the gorge to remove the imperiled pup from an inaccessible area of the Little Miami River.

That dog was safely rescued, but had no identification and went unclaimed by an owner. Having spent time with the dog at the station, Firefighter Alex Wendt and his wife adopted the dog and named him Chester.

“He’s been a fantastic addition to our family.” Wendt reports Chester is happy and healthy.