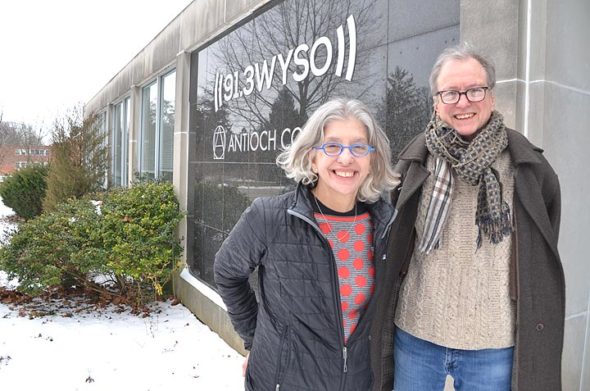 Neenah Ellis, general manager of WYSO, and Tom Manley, president of Antioch College, spoke recently about the coming change of the relationship between the college and the radio station started by Antioch students in 1958. WYSO will become an independent nonprofit. (Photo by Megan Bachman)

WYSO to separate from Antioch

Local radio station 91.3 FM-WYSO will no longer be owned by Antioch College, according to college and station leaders this week.

The 61-year-old radio station started by Antioch students will soon become an independent nonprofit governed by its own board of trustees.

Antioch plans to assign its Federal Communications Commission license to the new nonprofit in exchange for $3.5 million, a sum Antioch considers as “partial reimbursement” for its decades of investment in the station.

This week, Antioch College President Tom Manley said the move allows both groups to focus on their respective missions while they continue to collaborate.

“Increasingly the college needs to look at being a college,” Manley said.

“Parts of the organization, like WYSO, that are ready to fly on their own, we felt like they ought to be given the opportunity to do that,” he added. “We need to focus on Antioch College.”

Meanwhile, independence will aid WYSO’s fundraising efforts and help it continue to grow and invest in community offerings, according to WYSO General Manager Neenah Ellis.

“We’re going to expand our community offerings and expand that kind of engagement with our listeners,” Ellis said of the station’s immediate plans.

There are other perks of independence, Ellis said.

“We will have the autonomy to move much more quickly to bring on people. We will be our own bosses,” she said.

WYSO has already raised $3,415,000 toward the $3.5 million sum. The pledges include $2 million from Charles D. Berry of Dayton, whose grandfather started the Yellow Pages phone directory, along with 17 other undisclosed donors. The two parties hope to close at the end of March.

Ellis added that WYSO plans to stay in its current offices and studios in the Charles F. Kettering building and will be negotiating a lease agreement with Antioch to do so. Ellis said WYSO has no intention of leaving the village or the Antioch campus, which she said is “part of our legacy, our history and our DNA.”

“We have no reason to leave Yellow Springs. This is our home, these are our roots. We can do what we do from here,” Ellis said.

Even though its reach is regional, Ellis sees WYSO staying local.

“We have a regional identity, but I think it’s a beautiful story that we are in a small town,” she said. “People like coming to Yellow Springs.”

Started in 1958 as a student and faculty station with a 10-watt transmitter atop the student union, WYSO has grown to become the flagship NPR affiliate in the Miami Valley, reaching a potential audience of more than one million people.

Over the last decade, WYSO’s budget has doubled to $2.2 million, and the station had budget surpluses over the last few years, according to Ellis. Currently, WYSO is staffed by 12 employees.

But the financial relationship belies the real reasons for the transition, Manley said. WYSO’s budget may be in the black, but the college incurs other expenses not visible in its budget, including overhead and building maintenance, he said.

The most central issue is that “a radio station is not a college,” Manley said. Instead, WYSO could be seen as a project “incubated” by the college in the same way former Antioch President Arthur Morgan helped the college incubate several local businesses in the 20th century.

“There will be a lot of upstart projects, and Antioch College can’t be distracted,” Manley said.

Asked if the college was considering letting go of other assets such as the Glen Helen Nature Preserve, Manley said the board is not considering anything else at present. He also said that even though Hugh Taylor Birch donated the land that became the Glen to the college, he’s not clear the “shape” of the Glen’s relationship to the college should “stay the same forever.”

In regards to the $3.5 million figure, Manley said it was arrived at through the help of an independent audit and with an eye towards community.

“Our trustees thought it was a reasonable and responsible figure,” Manley said. “It’s an example of how this is not simply a financial transaction to recoup the college’s investment.”

Although the funds will be a boost to Antioch’s budget, which is $14 million for the 2018–19 fiscal year, Manley said that the college additionally benefits by not having to manage a radio station.

“As a start-up we have to be responsible for the resources we have,” Manley said, citing recent budget reductions at the college after its annual expenses ballooned to $22 million three years ago. The college’s spring quarter enrollment is 100 students, a spokesperson confirmed.

Manley also emphasized this week the change didn’t mean Antioch was “selling” the station, and it never entertained putting WYSO on the open market. Instead, the college felt “an obligation to make sure that this resulted in an independent, community-based radio station, not as a sale to the highest bidder.”

“This is a community asset and it’s our obligation as the parents to make sure that it remains positioned to serve the community,” Manley added.

Moving ahead, Antioch and WYSO will continue to collaborate, both the station and college affirmed. That collaboration includes students working at the station as Miller Fellows and participating in Community Voices radio training.

Those collaborations, added Manley, “don’t depend upon the legal structure of our arrangement,” and will continue.

The change for WYSO also lines up with a recent national trend for radio stations around the country, which over the last 15 to 20 years have been separating from the colleges or municipalities that spawned them, Ellis said. Such stations, like WBEZ in Chicago and WNYC in New York, have become “independent, mature organizations able to run themselves,” Ellis said.

“This is the natural direction for WYSO and other stations that have gone on to thrive,” she said.

Ellis added that WYSO is in a unique position to go independent, and wouldn’t have been able to make the move 10 years ago, when she first arrived as general manager.

“We’ve professionalized the operation, implemented best practices in fundraising and tapped into national resources,” she said. “We know we’ll be successful.”