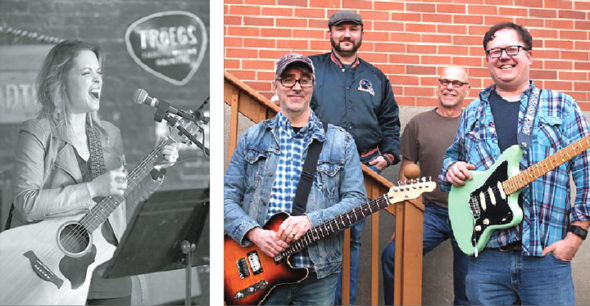 Local singer Rachel Litteral will open for Dayton-based band John Dubuc and The Guilty Pleasures at the Emporium this Friday, March 22. Pictured here, Litteral recently performed a solo set in Dayton; members of John Dubuc and The Guilty Pleasures including, from left, Brian Hoeflich, Dubuc, Tom Rastikis and Rich Reuter, posed during a recent rehearsal. (Photos by Gary McBride)

Litteral started as a solo singer seven years ago, then formed popular local band Rachel Litteral and the Abstracts about four years ago. An Emporium regular, the band was also heard locally at Street Fair, PorchFest and other events. Band members recently went their own ways, and Litteral is back to performing solo, writing new songs in hopes of releasing her debut album in the next year or so.

Litteral describes her sound as “folky blues with some rock mixed in,” she said recently. She doesn’t consider herself to be country, though she is sometimes assumed to be.

“People think that because I do some Bonnie Raitt and John Prine stuff, but really where my heart lives is the blues,” Litteral said.

She’s always been a little out of step with her contemporaries.

“The original, when I was a young teenager, was Bonnie Raitt. She’s who influenced me the most,” she said.

“When all the kids growing up were listening to ’80s stuff, I was listening to Sam Cooke and older ’50s and ’60s type stuff.”

Litteral has lived in the village for about 10 years, and has a daughter at Mills Lawn School and two sons who graduated from Yellow Springs High School.

John Dubuc and The Guilty Pleasures

Four veteran Dayton musicians are at the heart of John Dubuc and The Guilty Pleasures, playing an eclectic sound that the group’s Facebook page describes as “Woody Guthrie joins The Kinks to cover Some Girls.”

“It’s got a Replacements feel to some of it, but it’s singer-songwriter oriented,  with a rock band behind it,” Reuter said.

The Dayton-based group played its first show about a year ago, but has been an official band for a couple of years now.  Something of a “supergroup,” the band brings together musicians who have been active in the area music scene for decades.

“John’s got great lyrics, and a really good sense of humor,” Reuter said. “His lyrics are very mature in the sense that they’re the kind of songs about being grown up; some of it’s about being in a family.”

“It’s been a long time in the making,” according to Dubuc. “So it’s some really old songs, some kind of old songs and some newer songs.”

The album, entitled “Where Have I Been All Your Life?” is set to release June 9 with a listening party at Dayton’s Yellow Cab Tavern.

The band also has some live shows lined up for later this year, including one at the Levitt Pavilion in Dayton in August. Locally, the group hopes to play at the next Yellow Springs PorchFest. The band also has a monthly lunch gig at noon on the third Saturday of each month at Dayton’s South Park Tavern.

The Friday show will be the first time the group has played at the Emporium. Band members are enthusiastic about appearing there, according to Dubuc.

The music and wine tasting runs from 6:30 to 10 p.m., this Friday, March 22. Wine samples and bottles are available for purchase. As always, there is no admission fee, and a hat will be passed in support of the artists.