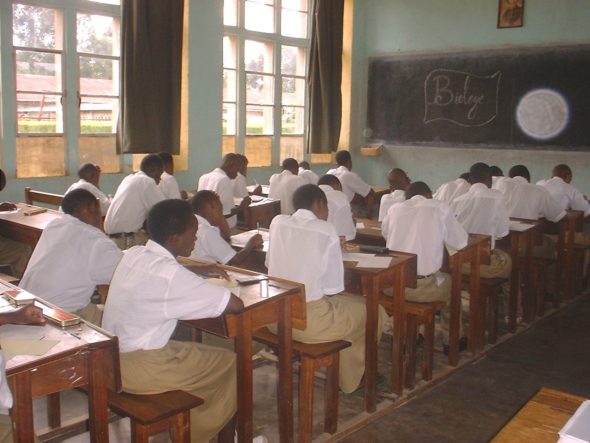 A photograph posted in 2011 on the Facebook page of the Byimana Ecole des Sciences shows a classroom at the Catholic boarding school in Rwanda.

The immediate past and current headmasters of the Ecole des Sciences in Byimana, Rwanda, will be guests Tuesday, March 5, at a “Mini French Cafe,” hosted by the French classes at Yellow Springs High School.

The free event begins at 6 p.m. in the school cafeteria. The evening will include a potluck, songs performed by Yellow Springs French students and a report by the two Byimana school representatives — Brother Straton Malisaba and Brother Crescent Karerangabo — on the state of their school and general conditions in Rwanda.

The Ecole des Sciences, a Catholic boarding school that is part of the Marist Brothers congregations in Rwanda, has had a more than decade-long relationship with Yellow Springs High School initiated by villager Al Schlueter.

Schlueter, a retired chemistry professor at Central State University, had for two consecutive years traveled to the Rwandan school to teach English and science for six weeks at a time. His efforts prompted a six-week visit about 10 years ago by a pair of Byimana teachers and a pair of students as well as Brother Straton Malisaba, who recently retired as headmaster. Several years later a handful of local students, along with Schlueter and now retired language arts teacher Aurelia Blake, made the trip to Rwanda, followed several years later by another pair of Byimana students and a teacher coming to Yellow Springs.

In the meantime, YS high school’s French classes began hosting an annual French Cafe event during which they raised money for the Rwandan school. The Tuesday night event welcoming the two Rwandan educators is being offered as a “Mini” version of the yearly gathering, which is scheduled Saturday, April 13, from 5–7 p.m.