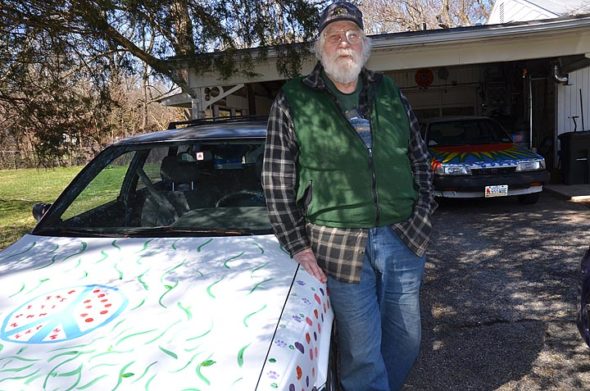 Longtime villager Joe Ayres is shown in his Polecat Road yard along with two vintage Toyotas, which each have more than 300,000 miles on the odometer. Ayres donated both at various times to fifth- and sixth-graders at Mills Lawn, who painted the cars. Ayres is known among many in the village as someone who can fix almost anything, and who also gives generously of his time and talents to help others. (Photo by Diane Chiddister)

Ask Joe Ayres to tell you about his life, and the stories come tumbling forth. There’s the year when, as a young man, he lived in a redwood tree in California, his nearest neighbor a Gibbon ape in the next tree. There are the years he spent working as a roadie for rock bands, driving trucks for KISS, the jazz musician Herbie Hancock and a modern dance troupe in Paris, among others. There were many trips back and forth across country on his BMW motorcycle, along with one to Mexico City and back with an ex-girlfriend.

But those adventures took place decades ago. When Ayres decided to settle down, he chose Yellow Springs, and he’s been here almost five decades. And in his unorthodox way, he has made a significant impact on this town.

“He’s one of the pillars of the community,” his longtime friend, Jim Bailey, said recently.

Certainly, Ayres isn’t a pillar in any conventional sense. He doesn’t hold a position of power, and he’s far from a rich man. But he is rich in friends, and those friends are devoted.

“The thread that runs through everything I know about Joe is that he is always ready to help others,” Bailey said.

What sets Ayres apart, according to Bailey, is that he wants to make things better, for both people and things.

A visit to Ayres’ Polecat Road home shows that some of what Ayres rescues is stuff. Known as a man with many friends, he is also known as a fixer of anything, so of course he often fixes things for his friends.

There are the six old Toyota station wagons on his property. The cars, built between 1988 and 1991, were “incredibly reliable,” he said, and “I fell in love with them.”

He kept fixing up his friend Laura Ellison’s Toyota until it reached 390,000 miles, although he acknowledges that, while the car runs well, it’s all rusted out. Another Toyota in his yard has 326,000 miles on its odometer — it also runs well — and both have been donated at various times to the fifth- and sixth-grade art class at Mills Lawn School so the kids could paint them.

Inside the house, each room overflows with machines, books, furniture and already-fixed or soon-to-be fixed appliances. In the small room off the kitchen where Ayres spends most of his time, there are six computer screens, several sewing machines, a few clocks rescued from Vernay Laboratories, a cuckoo clock puzzle, a shipbuilder’s model boat leaning against the wall, telegraph and sounder keys from the old Yellow Springs railroad station, a model sailboat, and shelves of old books, among other things.

Ayres’ interest in stuff, and in fixing it, began years ago, in Pennsylvania, where he grew up. His father, a professor of organic chemistry, was also a tinkerer, and he built a bicycle out of spare parts. When young Joe’s bike was stolen, his father gave him the bike he had built, but first he showed Joe how to take the bike apart and put it back together again.

“What I did with the rest of my life came from that,” Ayres said recently.

He honed his skill with bikes by getting spare parts from the garbage man, who found the parts at the dump. Then Joe built bikes for his friends.

While Joe had no interest in following his father’s career in academia, he had a great interest in taking things apart and putting them back together again. Indeed, that is the secret to how he can fix most things, he said, including things he doesn’t understand.

“If something breaks in my house, I take it apart to figure out how it works,” he said. “I figure if I make a mistake, it doesn’t matter because it’s already broken.”

When the Ayres family moved to Philadelphia when he was a teenager, he had some rough years in high school. After graduation, Ayres was clear that college wasn’t for him, so he began working on cars. But he also got his first glimpse of Yellow Springs at this time, since his older brother went to Antioch College, and Joe took a motorcycle trip to visit him. He took some of his many motorcycle trips across country at this time, making money along the way by working on cars.

But Ayres said his life turned around when his younger brother was killed in a motorcycle accident in 1966. He had met the Fraley family in Philadelphia when he was growing up, and they had moved to Yellow Springs. While Ayres wasn’t ready to settle down, he visited the Fraleys in the Vale, and ended up working for a year running the press at the Yellow Springs News. But then wanderlust overcame him again, and he took his motorcycle trip to Mexico City. On the way back,
“I decided to turn left instead of right,” and ended up in San Francisco.

It was the Summer of Love, and Ayres hung out in the People’s Park in the city, lived in a hearse for a while and also, of course, worked on cars. But because he could see that San Francisco residents were being chased out of town by rising housing prices, he moved on.

New Mexico came next, and eight months fixing an old Model A Ford truck. Ayres next drove the truck across country, at about 35 miles an hour, landing first in Ann Arbor, Mich., then in Yellow Springs.

During the next several years, he drove trucks for rock and roll bands such as KISS, but Ayres gradually realized he wasn’t having much fun. So he decided to settle in Yellow Springs.
Meeting John “Rusty” Neff, a mechanical engineer who worked for Vernay Labs, changed Ayres’ life. When Ayres asked Neff if there were any jobs at Vernay, it turned out there was one. Specifically, Vernay needed someone to maintain the one-of-a-kind machines that Rusty designed for the company.

“I’d never seen anything like them [the machines], but that didn’t stop me” from taking the job, Ayres said.

According to Bailey, who worked in Vernay’s research and development department, Ayres played a critical role in the company, which produced automotive parts.

“At work, he kept the factory running at all hours of the day and night,” Bailey wrote in a statement. “Vast amounts of production would never have happened without him. For me personally, he was an important bridge between the work of designing production machines and the operators being able to understand and use them. He had one foot in management and one in the workforce. He was a natural teacher in that setting.”

Ayres also developed lifelong friendships with fellow Vernay employees Neff, Bailey and Pat Dewees, among others. And he exercised his natural impulse for rescuing by volunteering at the Miami Township Fire-Rescue Squad. He worked on the squad for 12 years, during which he was a main responder for Yellow Springs. As part of his agreement with Vernay, he could leave work whenever he was alerted that he was needed on a rescue squad run.

“I’m sure he saved many lives,” Bailey said.

Finally, though, “I saw too much death and dying,” Ayres said, and he left the rescue squad.
Ayres retired from Vernay in 2004. He still works for the company, though, with the responsibility of overseeing the pumps that continue to remediate groundwater contamination.

Things are harder now, in some ways. Ayres has had significant health problems, and he needs a new ankle replacement, years after he had his first one. His knees and shoulders aren’t doing well, either.

Along with the physical pain of getting older has come emotional pain. Especially, he misses Rusty Neff, who became his closest friend. Neff died unexpectedly of cancer a year ago, and Ayres, who Neff had named executor of his will, has spent much of the last year dealing with his friend’s estate.

Getting older isn’t for sissies, Ayres says. And he definitely isn’t a sissy. While moving about is harder than it used to be, he finds ways to keep contributing to the community.

Ayres’ contributions have extended to the local police department. Because drivers often speed when they pass Ayres’ Polecat Road home, he asked the police several years ago to put the speed radar trailer in front of his house, to help people slow down. After the trailer sat on Polecat Road for a while, the department decided to junk it, since it wasn’t working well.

But Ayres wouldn’t have it. He was sure he could fix the speed radar, and he did. Since that time, he took on responsibility for the radar, moving it from place to place as requested, and providing repairs when needed.

“Joe has offered his time, money and service to what I feel is one of the most important factors in traffic control,” Chief Brian Carlson wrote in a recent email. “Reminding ourselves to slow down makes such a difference in excessive speed, driver distraction and just the simple reminder to be safe. I can’t thank Joe enough for the support he has provided to me, the department and the community.”

Along with fixing old stuff, helping out friends and moving the radar trailer around town, Ayres also volunteers his time and skills to the local Days for Girls project. The group, all women but Ayres, meets together to sew feminine hygiene kits to give to teenage girls in third-world countries, thus freeing them to participate in life during the days when they have their menstrual period.

Group member Rosemary Bailey initially contacted Ayres to see if he could fix a serger, the kind of sewing machine needed for the kits.

Ayres found out what it was, fixed the machine, and then joined the group. As well as now keeping an antique serger in his house and keeping it running, he likes to sew and believes in the project, so he’s been an enthusiastic participant.

Ayres also stays active in the Dayton Buckeye Model A Club, and occasionally drives his old Model A truck and Model T sedan around town, or in organized antique car events.

And he meets each morning with friends like David “Casey” Casenhiser and Dan Dixon at Dino’s Cappucinos for coffee and conversation. The group calls itself the Yellow Springs Brain Trust.

“We have a table full of old guys in a coffee shop, solving the problems of the world,” Ayres said.
There might be a few world problems too big for Ayres to solve. But if the problem involves fixing things, or helping out a friend in distress, he will probably take a crack at it.

“He’s a special guy,” Jim Bailey said. “You won’t find another one, anywhere, like him.”