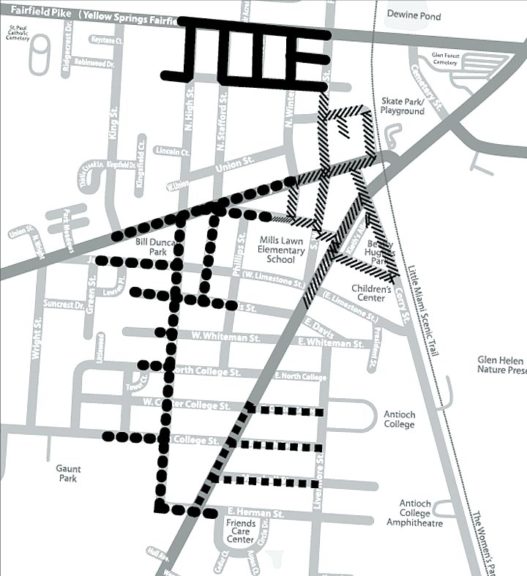 The four planned Vectren gas line replacement projects, based on a map from Vectren.

Over the next eight months, nearly two miles of natural gas mains and 140 service lines will be replaced here, according to a recent press release from Vectren Energy Delivery. Major disruptions to vehicle and food traffic and parking are expected.

Four separate Vectren projects will take place across the village through the fall as old bare steel and cast-iron pipes will be replaced with polyethylene plastic to meet federal requirements.

A project centered on Fairfield Pike got started last week and is expected to last through July 15. In addition, a project to replace gas main and service line for the entire downtown — both Dayton Street and Xenia Avenue — will start on April 29, with construction taking place primarily overnight, according to Village Public Works Director Johnnie Burns this week. The two other projects include a large area centered on South High Street and a small area east of Xenia Avenue (see map on page 6).

“There’s not a business in town that’s not going to be effected by this one project,” Burns said of the downtown project.

Construction crews from Miller Pipeline will work from 8 p.m. to 6 a.m., Sunday–Thursday, on the downtown section. During that time, the work may be noisy and street parking will be unavailable, Burns confirmed.

On Tuesday, April 16, about 25 people representing 15 downtown businesses attended a meeting with Vectren representatives on to share their concerns about the downtown project.

According to Burns, the business owners gave the company feedback on the best timing — opting for sooner rather than later, and primarily at night.

“The majority of the businesses said, ‘Jump on it now, do the big part before we get busy,’” Burns said.

In the end, Burns feels that the project is a “win-win,” with a critical infrastructure improvement taking place in the least disruptive way. Ultimately, fewer gas leaks are expected.

“It will be an inconvenience but it’s something that needs to be done,” Burns said at Council’s Monday meeting.

First, gas mains will be replaced within the right-of-way, then service lines running directly to homes and businesses will be replaced, according to Vectren. Burns added that gas meters will be moved outside if they are currently inside a home.  Property owners who will be impacted by a replacement project will be contacted by Vectren.

Last year’s project took place from July to October on sections of North High, Pleasant, Stafford, Union and Winter streets. A total of three miles of lines have been replaced in Yellow Springs since 2009, according to Vectren.