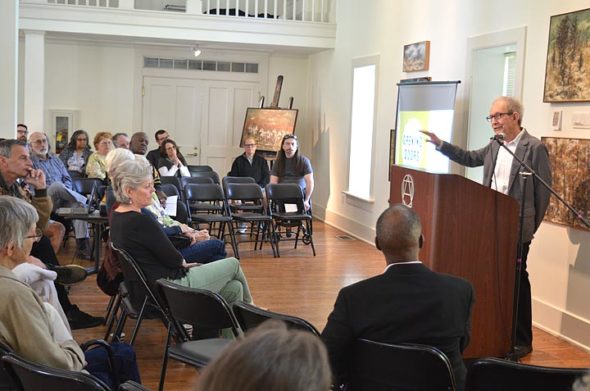 The average white family in America today has 10 times the wealth of the average black family.

To longtime fair housing administrator Larry Pearl, “that’s an amazing figure,” and its cause can be traced to America’s long history of housing discrimination.

“Wealth comes from investments — if you have money to invest — and housing. That’s just it,” he said. “And the reasons for that disparity go way back.”

Although the 1968 Fair Housing Act made illegal some of the most explicitly racist institutional practices, today an estimated one million instances of housing discrimination occur annually — even though just 10,000 complaints are officially lodged, Pearl said.

“There is a lot of discrimination still going on, notwithstanding 50 years of the fair housing law,” he said.

Pearl, who lives in Washington, D.C., addressed the issue at Home, Inc.’s annual meeting on Sunday, May 5. The local affordable housing land trust also commemorated its 20th anniversary at the occasion.

According to Home, Inc. Board Treasurer Kevin McGruger, Pearl was invited to speak because of some questions Home, Inc. received about its proposed senior apartment building earlier in the year.

“We thought it was a teachable moment that we do have a Fair Housing Act and we’ve had it for 51 years,” McGruder said.

Pearl, a 1955 Antioch College  graduate, spent 37 years in the field of fair housing. He retired from the Department of Housing and Urban Development as its acting deputy assistant secretary for program operations and compliance in the Office of Fair Housing and Equal Opportunity.

In his talk before a crowd of around 35 villagers, Pearl traced housing discrimination over the last century-and-a-half, beginning with the broken promise of 40 acres of land for former slaves after Emancipation.

Although hundreds of thousands of acres of land confiscated during the Civil War were to be distributed to former slaves, after President Abraham Lincoln was assassinated, President Andrew Johnson reversed course, granting that land to former slave masters, even if it was abandoned, Pearl explained.

As a result, black people became sharecroppers rather than landowners, a far more tenuous and less wealth-generating position, according to Pearl. Another legacy of that decision is reflected today in the statistic that just 1.3 percent of the nation’s farmers are African American, he added.

“Sharecropping is a marginal way to live and is not a way to own land, except for very few people,” Pearl said.

“So the government is involved in this intimately from the get go,” Pearl said.

Another method was the use of so-called neighborhood improvement associations, which would lobby city councils for zoning restrictions, threaten boycotts of real estate agents who sold homes to black people and enact restrictive covenants on properties in a neighborhood, according to Pearl.

While the use of covenants started in the 19th century, Pearl said, they “really took hold” once the Supreme Court ruled against racial zoning. In such a covenant, a deed restriction placed on a property would keep it from being sold to a “restricted group,” which was commonly African Americans but occasionally other minority groups as well. If a homeowner sold to that group, they could be sued by the association.

“It certainly was a deterrent, to put it mildly,” Pearl said. “It was a way to continue segregation.”

After World War I, another tool of segregation came to the fore — mortgages insured through the Federal Housing Administration. The government was not making home loans directly, but insuring the mortgages that other lenders made, Pearl explained. And they would not insure loans made to black customers, or to whites who lived near blacks.

“If you lived in a block and you were white and one black moved into that whole block … FHA would not insure one house in the entire block,” Pearl explained.

The infamous technique of redlining started with a government-funded study in the 1930s to create maps for 239 American cities, assessing the security of mortgage lending. Banks then denied loans to those living in neighborhoods deemed to be more risky, which typically indicated a high proportion of nonwhite residents. As a result, banks didn’t invest in predominantly black inner city neighborhoods, Pearl explained.

The same redlined maps corresponded almost perfectly to foreclosures in 2008, Pearl added, an example of “how the past pushes forward.”

When black soldiers returned from War II and began to demand equal treatment, progress on civil rights started in earnest. The federal workforce and armed forces were soon after desegregated. Yet fairness in housing continued to lag.

“There was a push forward on civil rights, but housing is usually the last thing to catch up,” Pearl said.

Symbolic of this time was that Jackie Robinson, the first black baseball player in the major leagues, could not find housing in New York City, Pearl said.

The GI Bill, which covered education and home loans for returning veterans, was also unevenly distributed along racial lines. Of the 13,200 home, business and farm loans the Veterans Administration gave out in 1947, only two were to African Americans, according to statistics Pearl shared.

Developers also kept blacks out of suburban housing through the 1940s and 1950s, even though they often received government incentives such as tax abatements, Pearl explained. At the same time, public housing continued to be segregated.

Fair housing advocates made strides beginning in the 1950s, starting with the formation of the National Committee Against Discrimination in Housing. Fair housing laws were passed first in Colorado, in 1959, then in California. However, real estate brokers in California attempted a constitutional amendment to throw out the fair housing law. It failed, but showed that fair housing progress wouldn’t come easily.

“There was pushback,” Pearl said.

President John F. Kennedy’s Kerner Commission report in 1968 was another turning point in the movement for fair housing, as it laid out how America created two “separate and unequal societies” for blacks and whites.

That report led directly to the creation of the Fair Housing Act, which became law on April 11, 1968. That consequential law protects people from discrimination in the sale, rental, financing or advertising of housing based upon their race, color, disability, religion, sex, familial status, or national origin.

“Think of what it took to get to that,” Pearl said of the law’s eventual passage.

Despite the progress, the lasting legacy of housing discrimination is clear, and demonstrated by the factor of 10 in wealth disparity between whites and blacks, Pearl said. He had another conclusion after walking the audience through fair housing’s history.

“The role of government was critical — federal, state and local,” Pearl said. “There were many ways things could have moved along much faster.”

After Pearl’s talk, Home, Inc. Executive Director Emily Seibel segued to the group’s annual report by saying that the nonprofit works at the intersection of fair housing and civil rights. In some ways, she added, Yellow Springs historically offered more opportunities for blacks than other communities.

“Yellow Springs was very unique in the region and offered some of our first desegregated housing,” Seibel said. “It helped inform the legacy of Yellow Springs Home, Inc.”

Seibel went on to update members and community members on the nonprofit’s progress over the course of the year. She highlighted the group’s new foray into rental housing, several multi-family projects currently in process and the successful rezoning for a 54-unit, $10.4-million senior housing apartment building, a project 10 years in the making.

“It was truly a monumental effort,” Seibel said of the senior apartments.

Seibel also gave an update about the federal tax credits for that project, saying the organization will hear on May 15th whether it will receive the funding. Ahead of that announcement, Seibel said the organization learned it received a perfect score on its application, meaning it’s “in the running” for the funds.