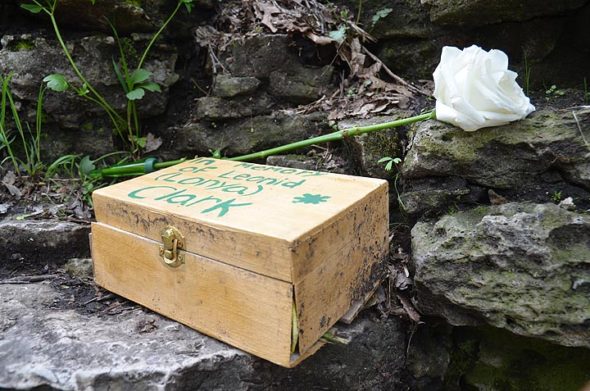 A heartfelt memorial for Leonid “Lonya” Clark appeared last week at a popular gathering rock in Glen Helen Nature Preserve. A white rose was added to the spot this week. Clark’s body was found in the Glen on April 12, and the Greene County Sheriff’s Office is investigating his death as a homicide. (Photo by Carol Simmons)

Village is rocked by homicide

The two-punch news last week that the body of villager Leonid “Lonya” Clark — who had been missing for nearly three months — was found by mushroom hunters in Glen Helen Nature Preserve, followed by the announcement that his death is being investigated as a homicide, has left the community reeling and seeking answers.

Clark, 26, a well-known and widely loved figure in the village, was officially reported missing on Feb. 6, when he didn’t make a scheduled court appearance. His last verified contact, according to authorities, was Jan. 13.

Family and friends held out hope that his disappearance would have a happy ending, but his extended absence, with no communication, was out of character.

Burke, like many of Clark’s friends and acquaintances, is devastated by the news of his death.

Outpourings of grief and shock have flooded social media, with villagers sharing reminiscences and impressions of the young man, who was known for his kindness, generosity and sweet smile.

“He had the absolute best smile,” one online poster wrote in a Facebook thread dedicated to shared memories about Clark.

Clark’s father, Eric Clark, said the expressions of love and support along with memories and stories “have been amazing, wonderful and comforting” for the family.

Adopted from Russia at the age of 4, Lonya, also called “Leo” by many of his friends, grew up in the village and attended Yellow Springs Schools, graduating in 2011.

Troubled by mental health issues and effectively homeless for the past nine years, he had an extensive network of support from family, friends, community members and village authorities.

In light of the community’s response to Clark’s death, “it is obvious more than ever, how much he belonged to all of us,” his father wrote in an email this week.

The circumstances of Clark’s death remain undisclosed, if yet known, by authorities. The Yellow Springs Police Department is referring all questions to the Greene County Sheriff’s Office, which is in charge of the homicide investigation.

Sheriff’s Detective Duane Gilbert, who is overseeing the case, did not respond this week to inquiries from the Yellow Springs News.

A 911 call Friday afternoon, April 12, alerted authorities to a body, which apparently was caught on debris along the Little Miami River down from the Grinnell Road bridge, just south of Bryan Park Road.

Greene County Sheriff Gene Fischer said in a press conference the following Wednesday that three mushroom hunters made the discovery.

According to central dispatch records, the 911 call came in at 3:14 p.m. The caller, who said he was mushroom hunting in the woods with friends, referred to himself as a survivalist, familiar with the outdoors, but still shocked to find a body.

He said the deceased appeared to have been in the elements for an extended time, more than a month at least, and looked to be wearing a red and black flannel shirt over a hooded sweatshirt, black or camouflage pants and duck boots. A small flashlight appeared to be clipped to a belt loop, he said. The sheriff did not discuss the clothing during Wednesday’s press conference, but in an answer to a media question affirmed that the deceased was fully clothed.

In the 911 call, the caller (who did not respond to a request from the News for an interview) told the dispatcher that he first saw a boot, which appeared to be caught on a stone wall by the bridge, before discovering the body.

The Sheriff’s Office and YSPD responded to the scene, and the body was taken to the Miami Valley Regional Crime Laboratory in Dayton for an autopsy on Saturday, April 13. A palm print confirmed Clark’s identified, Sheriff Fischer said at the press conference Wednesday.

Clark’s family was notified, and the Sheriff’s Office put out a public statement Tuesday, April 16.

The next day, the sheriff announced that “wounds to the body are indicative of a second party,” leading his office to pursue the investigation as a homicide.

He declined to describe the type and number of wounds that led to the conclusion of homicide. Fischer said that the coroner has the final say in the cause of death, but he was certain the coroner would rule Clark’s death a homicide.

Fischer also said that authorities believe Clark was dumped in the Glen, and that high water this spring carried his body about a quarter mile downstream. He would not say whether it appeared Clark was killed in the Glen or elsewhere.

According to a media release from the Sheriff’s Office last week, the body “appeared to have been there for some time.”

Yellow Springs Police Chief Brian Carlson said that search and rescue dogs, which were part of an extensive, yet unsuccessful, two-day search of the Glen in early February, would not have found the body if it had been under water or ice.

Given the discovery of Clark’s body in the Glen, and the possibility of his killing having occurred there, renewed concerns over safety in the nature preserve have risen in the area, especially following a pair of armed robberies on June 30, 2018.

Authorities say, however, that visitors need not be worried.

“The Glen is very safe,” Chief Carlson affirmed this week.

“As always, the regular rules of the buddy system apply: Hike in pairs or small groups if possible,” he wrote in an email this week. “Make sure you stay on the designated trails. … Pay attention to where you are and make sure your phone is charged. Follow the rules and do not hike during the posted restricted times, especially after dark.”

Concerning the June 2018 robberies, Carlson said the case is moot.

“The suspects were arrested outside of Yellow Springs on unrelated charges,” he said. “And due to the lack of witness testimony, our case was closed.”

Speculation in town has also tied Clark’s disappearance to another local case that Carlson said should officially be closed soon.

The Greene County Coroner’s Office ruled earlier this year that the death of villager Ken Livingston on Dec. 13, 2018, was the result of an accidentally self-inflicted shooting.

Carlson said this week that police are waiting for DNA results from the gun, but “unless there is new evidence that comes to light, the case will be closed as accidental.”

While Clark was not known to be present at the party during which Livingston died on the balcony of a friend’s apartment, he was reportedly on hand the next day for final cleanup at the scene. Contrary to some rumors, Clark did not assist police, and he was not paid by police, Carlson has said. Multiple accounts indicate he offered to help the apartment’s tenant and was of assistance to her.

Multiple sources also say he was troubled by the tragedy, which occurred a month before his disappearance.

But his family and some of his friends have said that even before Livingston’s death, Clark was experiencing increased anxiety and paranoia.

His parents said it was hard to know when his anxiousness was based in reality.

A community in pain

Clark’s death, and the unanswered questions around his killing, following so closely after Livingston’s accidental shooting, has intensified pain in the community that’s been hit by multiple tragic deaths in recent years.

Clark’s classmates feel similarly. He is the fourth member of his graduating class to have died in the last couple years.

In addition, the village was rocked in January 2017 by the double murder of William “Skip” Brown and Sherri Mendenhall. Brothers Dustin and Brett Merrick, then related to Brown through marriage, were convicted last year and are serving prison terms for the crimes.

Several deaths by suicide in the first few months of 2018 also added to the community’s well of hurt.

Clark’s parents have announced that a memorial for their eldest son is being planned for Saturday, June 1, at First Presbyterian Church.

The Sheriff’s Office asks that anyone with any information about Clark’s disappearance and death call the department’s tip line, at 937-562-4819.