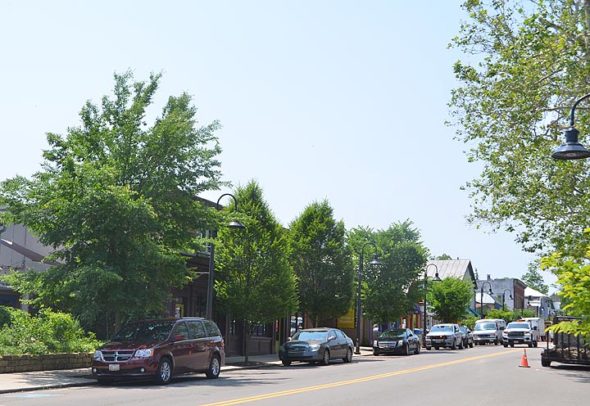 Bradford pear trees, an invasive decorative tree which had been planted downtown, have gradually been replaced by American hornbeam, American yellowwood, Greenspire linden and Princeton elm.. (Photo by Audrey Hackett)

‘Green death’ and other invasives

Pervasive in some yards, along portions of the bike path and in the understory of area nature preserves, a single non-native species of honeysuckle — Amur honeysuckle — has transformed the local landscape over the last 30 years.

While the bush honeysuckle species with arching branches, fragrant white flowers and red berries may look pretty, its impact on local ecology is anything but.

“It has such a negative impact on the local food web,” said naturalist Michelle Comer, who manages Clifton Gorge and 16 other preserves in our part of Ohio.

One of the first understory plants to leaf out and the last to lose its leaves, Amur honeysuckle grows aggressively, displacing a wide array of native plants. Its leaves don’t provide food for caterpillars and other insects, which local and migrating birds rely upon as a food source. And while birds and deer do consume — and spread — the plant’s berries, honeysuckle berries are less nutritious than those of native species.

Studies have shown that birds who nest in honeysuckle are more prone to predation, according to Comer. And new research suggests that the berries might even cause male cardinals to look redder, and thus “fitter,” than they actually are, she added.

With all these strikes against honeysuckle, it’s no wonder that Diehl, who grew up in Yellow Springs and now lives in Cincinnati, is zealous in his opposition to the plant. An environmental lawyer and licensed biology teacher, he has personally cut down hundreds of honeysuckle bushes as a weekend volunteer at Clifton Gorge.

“It’s my outdoor gym,” Diehl said of the activity, which entails cutting the plant’s woody stems with saws or axes and applying herbicide to the stumps.

Comer estimates that more than 60 percent of staff time at the Gorge is taken up with combating invasive plant species including honeysuckle and Oriental bittersweet, a woody vine with bright red seeds in the fall.

“Getting rid of non-native invasives is our biggest preservation goal,” she said.

That goal is shared in common with a range of local groups and land managers. The Village of Yellow Springs, in collaboration with the Yellow Springs Tree Committee, continues to remove Bradford pear trees from the local streetscape. Glen Helen has worked for years to combat Amur honeysuckle, and now is tackling a new invasive: Japanese stiltgrass. Community Solutions has a number of initiatives to remove honeysuckle from Agraria, the 128-acre parcel of former farmland it purchased in 2017 as a site for regenerative agriculture. And the eight-acre preserved portion of Glass Farm has seen a literal flowering of prairie species as honeysuckle, Bradford pear and other invasives have been removed.

This week’s article looks at Village initiatives, while a subsequent article will explore activities of other area groups such as the Glen and Community Solutions. 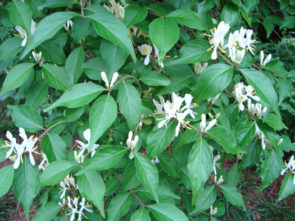 In January 2018, the Ohio Department of Agriculture released a list of 38 non-native invasive plants banned from sale and distribution in Ohio. The list includes many familiar locally growing plants such as Amur honeysuckle and other bush honeysuckles, Callery pear (including the Bradford pear, a cultivar), tree-of-heaven, Russian olive, garlic mustard, multiflora rose and dame’s rocket. The Village of Yellow Springs also cites many of these species on its own list of invasives in a section of its “weeds” ordinance adopted in 2017.

State law defines invasive plants as “plant species that are not native to Ohio whose introduction causes or is likely to cause economic or environmental harm, or harm to human health as determined by scientific studies.”

But Glen Helen Executive Director Nick Boutis has a more succinct definition: “Plants that don’t play nice in the ecosystem we have in Ohio.” 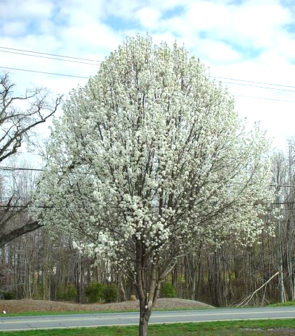 Invasives spread rapidly, have no natural predators, don’t contribute food or support to native food chains and push out plants that do, Boutis explained. Many were intentionally introduced by humans for ornamental or other uses before their invasive character emerged. Amur honeysuckle, for example, was brought to this country from its native China in the late 1800s as an ornamental species and promoted for landscaping, wildlife cover and soil erosion control, according to a fact sheet from the Ohio Invasive Plants Council.

When Boutis first came to Glen Helen as a naturalist intern in 1990, honeysuckle was  relatively sparse in the preserve.

“Looking at old photos, there’s some honeysuckle, but nothing like it is now,” he said.

Not all non-native plants are invasives. Of the approximately 2,300 species of plants known to occur in the wild in Ohio, about 500 species, or 22 percent, are not native to Ohio, according to a brochure from the Ohio Department of Natural Resources, or ODNR. Most of these non-native species “never stray far from where they are introduced,” the ODNR brochure states. Yet some become very invasive, pushing native plants out of woodlands, wetlands and prairies.

Human activity contributes to the establishment and spread of invasives beyond the initial introduction of these species. Invasive plants often gain a foothold in “edge” areas where the land has been disturbed, then move into wooded areas or wetlands, according to Comer. Edge areas include the margins around homes, shopping areas, farmland and roadways.

Comer identified the aggressive spread of invasives in our area as the “second greatest threat” to local ecology, next to habitat destruction — also a largely human-caused problem.

Yet humans, working in concert with nature, are an essential part of the solution, local land managers say.

“We really can make a difference,” Comer said.

Where honeysuckle has been cut out of some areas of Clifton Gorge, pioneer native species like Virginia bluebells and trillium are returning.

Earlier this spring, the Village hired arborists to remove two Bradford pear trees from their sentinel positions in front of the Yellow Springs post office on Corry Street. The trees are pretty, if smelly, when in bloom, and provided shade on an otherwise hot corner. But Bradford pears are an invasive species, and pose a threat to Glen Helen, according to Macy  Reynolds, president of the Yellow Springs Tree Committee, which collaborates with the Village to remove invasive trees and identify suitable native alternatives.

“We’re worried about them getting into the Glen,” she said.

The post office location will eventually be replanted with native trees, she added.

“We’ll be putting something nice there. We’re working with the Village on it,” Reynolds said.

The Glen’s Boutis said pears haven’t been a problem at the local preserve — invasives such as honeysuckle and Japanese stiltgrass pose a greater threat — but are destructive to landscapes around our part of Ohio.

“Drive around some parts of our county, and they’re as far as the eye can see,” he said.

Developed as an ornamental tree and used across the U.S. for landscaping beginning in the 1960s, Bradford pears were supposed to be sterile. But the trees proved able to cross-fertilize with other cultivars and sprout wherever they’re dispersed.

“They’re like the velociraptor in ‘Jurassic Park,’” Boutis said, referring to the dinosaur that comes roaring back to menacing life in that film.

Bradford pear trees were planted in downtown Yellow Springs in the 1980s and ’90s as street trees, before their threat as invasives was widely understood. Bradford pears were added to the Ohio invasive species list in 2018, with sale prohibited beginning in 2023. In Yellow Springs, no new Bradford pears have been planted on Village-owned land since about 2000, according to Reynolds.

Yellow Springs began taking down its pears in 2013, starting with the 14 Bradford pears that previously lined Xenia Avenue downtown.

That action was highly controversial at the time, though more recent removals of pear trees have not provoked public outcry.

“When we started taking them down, there was a hue and cry,” Reynolds said. “It’s always hard when a tree comes down,” she added.

All 14 downtown locations have since been replanted with species such as American hornbeam, American yellowwood, Greenspire linden and Princeton elm. Two of the trees have failed and been replaced, while several trees now reach or top the second story of downtown shops on the northeast side of Xenia Avenue. The Yellow Springs Tree Committee maintains newly planted trees for three years, watering, mulching and pruning them, as well as looking out for the trees’ overall health.

In addition to the pears in front of the post office, the Village also removed at least eight trees on the public rights-of-way at Xenia Avenue and West Whiteman Street this spring. Nearby homeowner Krista Magraw, the executive director of Tecumseh Land Trust, said she was “thrilled” with their removal.

“I offered to take them out myself,” she said.

Two of the spots along Xenia Avenue in front of Magaw’s house have been replanted with native trees, a hop hornbeam and a Redpointe maple.

“I’m really excited. They’ll be good hosts to the birds and bugs that are supposed to be here,” Magaw said.

And last July, the Village took down a Bradford pear in front of the Subway at the corner of Corry Street and Xenia Avenue. The Village won’t be replacing that tree because it limited visibility at the corner and was sited on top of a water and gas main, according to Public Works Director Johnnie Burns. The Village is considering other ideas for adorning the spot, but plans are not yet public.

Two other projects related to clearing invasives and planting native species are underway at the Village, Burns added.

The area near the Bryan Center between the bike path and the skate park and former tennis courts was recently cleared of invasive species and dead trees to make way for “appropriate tree plantings” by the YS Tree Committee, he said. And a planned food forest on Village land just south of Allen Street on U.S. Route 68 will be cleared of invasives and existing plantings to make room for a fall planting of new trees, including natives that provide food sources for animals and villagers alike.

For local landowners who wish to replace Bradford pears or other invasives on their own property, the YS Tree Committee can help make recommendations of native trees to plant in the place of what’s taken down.

“We’re not arborists, but we can help you come up with ideas for native trees for your site,” Reynolds said. “Right tree, right place” is the guiding principle for tree selection, she added.

Native tree species that are lovely, but often overlooked, in Reynolds’ opinion, include Carolina silverbell, sassafras and American wahoo in smaller spaces, and hop hornbeam and some disease-resistant varieties of elms for medium-sized spaces. And for villagers with lots of space in their yards, she may venture to recommend one of the mighty oaks: the Shumard, bur and shingle oaks are all good choices for our area.

An appendix to the Village ordinances, which are available online, also offers a list of “recommended trees” for Yellow Springs, developed in consultation with an urban forestry expert, according to Village Planning and Zoning Administrator Denise Swinger. The Village would require any prospective developers to use that list and refrain from planting invasives, Swinger said. The list is a resource for residents, too.

To Reynolds, who has many native tree species on her own property, local residents can enrich Yellow Springs’ already dense and varied urban forest with their plantings.

“Homeowners can add a lot to our treescape,” she said.

3 Responses to “‘Green death’ and other invasives”