Tecumseh Land Trust has removed about four acres of invasive plants from the 8-acre Glass Farm conservation area off King Street. Left, a clump of honeysuckle, autumn olive and bittersweet. Right, the same area after TLT Associate Director Michele Burns and team cleared away the invasives. Both photos were taken on the same day during a work session on the property two years ago. (Submitted photos)

Not all green is “green.”

That’s the message from local land managers who are combating a host of non-native invasive plant species that menace locally preserved and reclaimed lands. 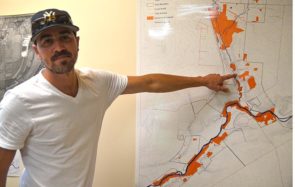 Glen Helen land manager Ben Silliman pointed out areas of the Glen that have been cleared of invasive bush honeysuckle in recent years, indicated by shading. Areas around the Glen’s waterways have been prioritized due to sensitive ecology and a prior Nature Conservancy grant focused on a stretch of the Little Miami. Amur bush honeysuckle is one of at least 22 invasives that have been found in the local nature preserve. (Photo by Audrey Hackett)

Silliman took over from former Glen land manager George Bieri in 2017. Both men said this week that removing invasive plant species is a major part of the land management job at Glen Helen. Silliman’s office is adorned by huge chunks of various species of woody invasives, displayed almost like trophies. A twisted mass of Asian bittersweet stem looks lethal, and is.

“Unlike native vines, this vine will kill a tree,” Silliman said.

Also adorning the walls of Silliman’s office are maps of the Glen, including one that offers some hope. Sizable blocks of orange lining the riparian areas of one large map and spreading out from there to slope and upland areas indicate sections of the Glen where honeysuckle has been removed.

Silliman has developed data-laden digital maps of the Glen using GIS technology to link map features to textual data. These color-coded maps show a progression over time of portions of the Glen in which crews have cleared different invasives.

In the case of honeysuckle — the Glen’s most persistent and pervasive scourge — crews have removed about 320 acres since 2012, according to former land manager Bieri. The effort was jumpstarted in 2012, thanks to a Nature Conservancy grant focused on invasive removal along a two-and-a-half mile stretch of the Little Miami River in the South Glen.

Currently, Glen staff and volunteers clear about 30 to 40 acres of bush honeysuckle per year, according to Executive Director Nick Boutis. The effort is undertaken strategically, with priority given to the most ecologically sensitive and significant areas of the preserve.

“This is long-term work,” Boutis said.

Last week, the News looked at why and how invasive plant species pose a threat locally, with a focus on local impacts of Amur honeysuckle and Village efforts to remove Bradford pears on Village-owned land. This week, we conclude our two-part story by examining invasive-clearing projects underway at Glen Helen, Glass Farm and Agraria.

Invasives are here because people are.

These aggressive non-native plant species gain a toehold because past or present land use by people disturbs local soils and disrupts, sometimes violently, local ecology — the nuanced and balanced web of plant and animal relationships.

“Invasives like disturbance,” is how the Glen’s Silliman puts it.

While Glen Helen appears today to be continuous verdant preserve, the land that makes up the Glen is actually a patchwork of different prior uses, among them farming, grazing and logging. Photos from the 1920s, before Hugh Taylor Birch donated the Glen land to Antioch College in 1929, show much of the land denuded.

“We are starting a recovery process,” Silliman said of the stewardship of the preserve, now 90 years in the making.

While the oldest trees in the Glen are probably about 400 years old, many are 90 years old or younger. Newer parts of the forest reflect more recent or more intense land disturbance. Bush honeysuckle is relatively sparse in older areas of the forest, and dense in newer parts, according to Silliman.

“Activities, or lack thereof, from a century ago are driving current conditions,” he wrote in a story on the topic in the most recent edition of the Glen Helen magazine.

Some human activities impacting the land are much more recent than that.

Over the past four or five years, a new invasive has appeared in the Glen: Japanese stiltgrass, a grass with a silver stripe that runs off-center down its blade. By late season, the grass grows to four or five feet in height. It’s spreading rapidly in wetter and sunnier areas and near trails, according to Boutis.

“It’s the species I worry most about right now,” he said.

The grass was likely inadvertently introduced by mowers and spread on people’s boots and deer’s hooves.

Glen staff are working hard to contain it, he said. They’re refining a three-pronged approach appropriate to different seasons, from spraying small amounts of herbicide in early spring, to mowing the stiltgrass in late summer before it goes to seed, to pulling the plant up and disposing of it after the seeds have scattered in the fall.

“If we don’t take action, it will be like the cursed honeysuckle,” Boutis noted.

Because humans are an important “vector,” or means by which the plant spreads, it is essential that people stay on paths and not charge into the woods, unwittingly  aiding the plant’s spread, Boutis emphasized.

“We want fields of native fescue, not Japanese stiltgrass,” he said.

On one of the newest portions of the Glen, reclamation of the land from past human uses is presently underway. In 2017, the Glen Helen Association purchased the eastern portion of Sutton Farm from the Village of Yellow Springs. The 76-acre parcel of former agricultural land and some forested land located on the north side of State Route 343 is already showing signs of regeneration, according to Silliman.

He and his crews are reforesting 35 acres of the formerly cultivated land by clearing invasives and selectively planting native trees.

“Two years ago, there was one plant: soybeans. Now there are at least 60 species of plants,” Silliman said, adding that a survey of the area is ongoing. Most of these plants are springing up from seeds already in the soil, given that seeds can lie in wait years or even decades to germinate.

“The seeds are there. The seed source is incredible,” Silliman said.

After the invasives are cleared, most of the work is just staying out of the way, he added.

“If we don’t do anything, trees grow. Often the best thing I can do is nothing,” he said.

For some local lands, getting to that point is still years away. At Agraria, the 128-acre parcel of farmland purchased by Community Solutions in 2017, several honeysuckle clearing projects are just beginning.

He highlighted several relevant projects. Community Solutions horticultural expert Bob Moore is guiding a reforestation project funded by Vectren on land adjacent to Community Solutions’ offices. Honeysuckle removal is the first component of the project; replanting with native trees will follow. A second project is taking place in partnership with the Nature Conservancy, which is helping Community Solutions restore the portion of Jacoby Creek that runs through Agraria. Removing invasives is just part of that larger project to restore the stream ecology and the natural flow of a waterway that was previously harmed by agricultural runoff and practices such as straightening the stream.

According to Diamond, the Nature Conservancy expert said the honeysuckle plants around Jacoby Creek at Agraria are some of the largest he’s ever seen.

A third invasives-related project, which begins this summer, involves plant scientist Marcus Nagle from Central State University. Nagle is launching a study of the effects of the herbicide glyphosate on surrounding soil when it is applied to honeysuckle stumps in different doses and at different frequencies, Diamond explained.

All of the land managers with whom the News spoke use what they describe as small amounts of glyphosate, known commercially as Roundup, to treat the stumps of honeysuckle in order to prevent or slow re-sprouting. The herbicide is also used for other woody invasives such as Russian or autumn olive and Bradford pear.

The usual approach to destroying honeysuckle is to cut the plant down to just an inch, then apply herbicide to the stump, where it can penetrate the roots and kill the plant.

The Glen’s Silliman acknowledged that the use of Roundup in any amount scares some people. But he also emphasized its essential role to the larger goal of increasing biodiversity and creating new habitat areas in the Glen.

“It’s a necessary tool,” he said. “In this case, it’s actually benefiting the ecosystem, rather than being a detriment,” he explained, contrasting the Glen’s targeted use of small amounts of the herbicide with its large-scale application in commercial agriculture.

While removing invasives is slow work on large properties or in areas of dense growth, on smaller lands, the results are more immediate — and beautiful.

At the Village-owned, 8-acre Glass Farm conservation area off King Street, Tecumseh Land Trust, or TLT, has been removing invasives and planting native species for at least two years, according to TLT Executive Director Krista Magaw.

“We took out about four acres of pears,” Magaw said recently.

Other species removed include bush honeysuckle and autumn olive. In place of these invasives, TLT crews have planted native tree species including willows, dogwoods and a few bigger hardwood trees such as oaks. And in the open portion of the property, TLT did a “prairie planting” last year, returning species such Echinacea, milkweed and native grasses to the land.

“The prairie flowers are getting nice,” Magaw observed. “Once they’re established, they’re pretty strong,” she added.

Tecumseh Land Trust is also working with local landowners to improve conservation practices — including taking out invasives and planting native species — on conserved land. In 2017, the nonprofit was awarded a five-year, $1.44 million Jacoby Partnership grant; funds from that grant are now available to landowners in Miami Township and parts of Xenia and Bath townships to not just purchase easements, but also to begin improving habitat on their properties. Those interested in more details about the opportunity should contact TLT at 767-9490.

Stand at the Glen’s new bridge across the ruins of the old dam in the north of the preserve and look upstream. You’ll see native spicebush, blackhaw viburnum and bladdernut; you’ll see sassafras and dogwood.

But given half a chance, nature can heal.

“Mother Nature has a tremendous ability to recover and the energy to heal itself,” Silliman said.

“Gentle nudging” — albeit sometimes with a chainsaw — is often all that nature needs, he said.

“You have to let Mother Nature be the guide. I never think I understand her complexity more than she does,” Silliman explained.

Yellow Springers who care about the Glen and other natural local areas have a role to play in their preservation — in their own backyards. Invasives such as honeysuckle, burning bush and privet flourish in many local yards. The proximity of the village and the Glen means that what grows in Yellow Springs eventually also grows in the Glen.

“The yards of Yellow Springs are really impacting the Glen,” Bieri said.

In the coming months, the News will provide more information about common invasives found in local yards and methods for their removal, as well as alternative native plantings.

Read the previous article in this two-part series, “‘Green death’ and other invasives.”