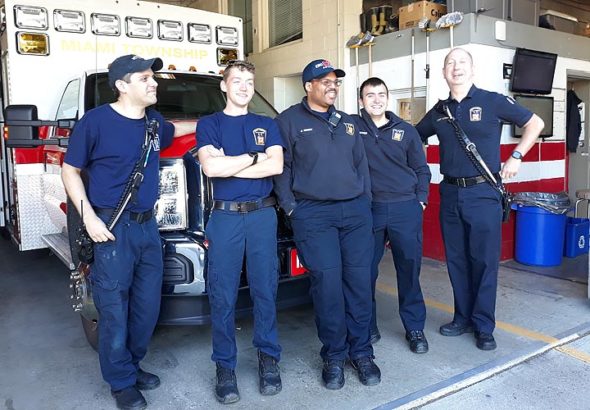 Helping the helpers at MTFR, YSPD

In the last two weeks of May alone, Miami Township Fire-Rescue crews responded to 40 calls for emergency medical service and 15 reports of fire.

That’s an average of nearly three EMS and more than one fire call a day in a response coverage area that includes Yellow Springs, Clifton, Miami Township and a recently added portion of Bath Township.

While many fire runs end up being false alarms or minor incidents easily handled — food burning, a smoking appliance, sparking wires — the responding crews must nevertheless remain ever alert to the possibilities of tragedy and trauma.

One such occurred among those end-of-May runs, when an early morning house fire caused extensive damage and sent two residents and a Good Samaritan neighbor to the hospital for burns.

The EMS calls always mean someone is in some kind of distress, regardless of whether the patients end up going on to the hospital for further treatment.

The bottom line: When a call comes in, local first responders such as MTFR and Yellow Springs Police, never know exactly what they might find when they arrive.

The result is that the work is physically demanding and emotionally taxing, MTFR Chief Colin Altman said recently in an interview in his office at the department’s fire station on Corry Street.

And for many decades that was just accepted as the way it was, a part of the job, he said.

Only in recent years have fire and law enforcement departments begun taking time to address the effects such work has on the health and well-being of their employees.

“We focus on public safety, and we’re just starting to accept that there is a significant behavioral component for keeping our guys healthy and safe,” Altman said.

The psychological affects of dealing with the stress of the job and the tragedies consistently encountered can be profound, he said.

“More firefighters and police officers kill themselves each year than are killed in the line of duty,” the fire chief said.

Yellow Springs Police Chief Brian Carlson agrees that the psychological weight of the job adds up. In a phone interview this week, he cited  recently released national data confirming that police officers have the highest numbers of suicide, divorce and substance abuse, particularly alcohol, than any other profession.

“We need to take heed” of the job’s toll, the police chief said. 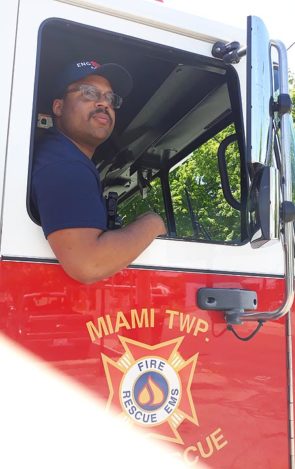 MTFR Firefighter/EMT Josh Sweet sits in the passenger side of one of the department’s fire engines after responding to a call Tuesday morning, June 11. (Photo by Carol Simmons)

The term “first responder” — coined to describe those whose job is “to run toward [disaster] rather than run away,” according to the U.S. First Responders Association — seems to have entered the public lexicon after the Sept. 11, 2001, terrorist attacks.

In addition to firefighters, paramedics, EMTs and law enforcement officers, the designation has come to include doctors, nurses and military personnel, among others on the front lines of tragedy.

Altman, who has been with MTFR since 1994 and chief for the last decade,  said he hadn’t heard the term used widely before 9/11.

He said the firefighter deaths that occurred in the 2001 terrorist attack felt personal for him, not only because of a sense of fellowship with New York City’s first responders, but also because he knew some of the men who were killed.

“I had met some of those guys,” he said, explaining that he had attended professional seminars in which NYC firefighters were present or had led.

Those firefighters are heroes in his mind. But he pushes away the hero label for himself.

“It’s almost an uncomfortable feeling” when the term is used, he said.

“In my experience, the only hero [firefighter] is a dead firefighter, all the rest are doing their job,” he said.

That sense of just doing your job, a deep-rooted and shared feeling among first responders, can lead to resistance in recognizing a need to help, let alone seeking that help, Altman said.

But he and police Chief Carlson both agree that such support is crucial.

“It’s called compassion fatigue,” Carlson said, naming the phrase that mental health professionals have given to the affects of dealing with tragedies on a daily basis.

Dr. Charles Figley, the director of Tulane University’s Traumatology Institute, defines compassion fatigue as “a state experienced by those helping people or animals in distress … that can create a secondary traumatic stress for the helper.”

Apathy, isolation and substance abuse are among the symptoms associated with such secondary traumatic stress, according to research by the Compassion Fatigue Awareness Project, founded by Patricia Smith, a licensed counselor based in Washington state who writes and speaks extensively on the condition.

According to a 2018 study by the Substance Abuse and Mental Health Services Administration, firefighters, police officers and EMS providers have significantly more incidents of depression, post-traumatic stress disorder, substance abuse and suicide/suicide ideation than the general population.

“We’ve all had some horrific eyewitness events,” Carlson said.

At the same time, “trauma comes in different forms,” the fire chief said, citing two incidents — one with a tragic outcome and the other with a happy ending — that both caused pain in his department.

The first involved the death of a 16-year-old boy at Clifton Gorge. The teen had fallen off an upper path into the river many feet below, and as emergency personnel searched for him, family members gathered at the scene in hopes he would be found alive.

It was soon clear to the emergency team, however, that they were “dealing with a recovery rather than a rescue,” Altman said. But even with that knowledge, when the youth’s body was located hours later, everyone was devastated.

“Everyone was so invested in finding the kid,” Altman said.

The second incident ended well, but left residual trauma for crew members involved. Three firefighters had gone into a smoke-filled basement when the oxygen tank of one — a 21-year-old college student who had joined MTFR as a teen Explorer — signaled there was a problem with the air flow. As the young man climbed the stairs to get away from the smoke, he collapsed in cardiac arrest. His fellow crew members got him out of the house, administered CPR and revived him. And he was fully recovered in a couple of days, Altman said.

But listening with the crew to a recording of the incident a week later showed the chief how traumatizing the event had been for the team as they relived the fear and uncertainty of that moment.

“Sometimes it’s not just the horrible [outcomes] that cause trauma,” he said.

In response to these types of experiences, a statewide targeted campaign this spring focused attention on local first responders to both thank them for their service and to share resources and information for coping with trauma.

Its two related messages: “Helpers need help, too,” and “It’s OK to ask for help.”

Altman said he watches for signs of distress in the fire crew members and has seen them in himself as well, including “trouble sleeping, physical tightness and body aches.”

Those are some common indicators, along with irritability, exhaustion, emotional distance and disinterest, that someone could be having a hard time, he said.

The results can look a lot like burnout, police Chief Carlson said, but the effects go deeper.

“You have to navigate a way to turn that off,” he said.

Recognizing the internal need, the local fire and police departments offer a range of assistance to crew members, though both chiefs said they would like to see the efforts continue to expand.

Both departments, through the Village, offer Employee Assistance Plans where individuals can seek private counseling.

In addition, “we have started what we call trauma therapy,” in which state-approved facilitators, often veteran law enforcement personnel, come in and work with local officers, Carlson said.

“When there’s a critical incident, we mandate you talk to somebody,” he said.

Similarly, the fire department brings in facilitators to meet with departmental members in a group setting to talk about their experiences on the line. Peer counselors, including local volunteers, also come in for debriefings.

“The biggest thing we do is just talk about what happened,” Altman said. “We deal with horrible situations that most people don’t,” the fire chief added.

Talking with his fellow crew members after a difficult call is most helpful for Jeremy Rea in processing tough experiences, the firefighter said in a recent phone call.

“We’re really close,” he said of the department. “Having that support system is really good.”

Rea, a Yellow Springs High School graduate, said he joined the local fire department nearly 11 years ago in part because it looked exciting, but mainly because he wanted to be part of an effort that focused on service.

“I definitely wanted to help out the community,” he said.

A similar desire prompts the majority of new recruits, Chief Altman said, citing an MTFR survey conducted a couple of years ago that asked why people had joined the department.

The leading answer was “you want to help, you want to serve,” he said.

“Ultimately you’re there to help, and that’s what attracted me. That to me is the biggest draw,” Fischer said in a telephone interview.

Fischer, who comes from “a long line of nurses,” said she is keenly aware that she’s “showing up for a person’s worst day.”

“If I can make their day a little better, I like that idea.”

Similarly, Carlson said he went into law enforcement to help people when they’re in trouble.

“People don’t call us when things are good,” he said.

That focus on others, however, can lead first responders to ignore their own needs, Altman and Carlson both said.

“If we’re not in a good place, then we’re not providing our best for the community,” the police chief said.

In the line of danger

Obviously, first responders face personal danger, in addition to the possibility of experiencing secondary trauma, when responding to emergency calls.

Police Sgt. Naomi Watson was knocked down by a car while directing traffic during last weekend’s Street Fair. She wasn’t badly hurt, but the incident is a reminder that the biggest cause of police deaths is being hit by a vehicle, Carlson said.

Altman said that being a first responder has grown even more difficult in recent decades.

“In general, fire service has taken on more responsibility,” he said. “Terrorism, weapons of mass destruction, natural disasters, preparing for active shooters … these are thing that weigh on me all the time,” he said.

The Village and surrounding area is relatively small, but the range of people needing assistance is wide, Altman said, listing an aging population, a transient college community, hikers in Glen Helen Nature Preserve, bikers on the bike path and visiting tourists, among the people they serve.

“Glen Helen can be a free for all” during the warm weather months, he said.

“And we blow out the rest of the county in the number of calls that are mental health issues,” he added.

He said his fire crew members worry about villagers who’ve called for help, whether they’re getting the ongoing care they need, whether they have anyone checking in on them.

Both chiefs said they feel fortunate to have a good working relationship between the fire and police departments, along with the Greene County Sheriff’s Office, the Ohio Department of Natural Resources and the Village utilities crew.

Carlson said he feels like they’re all on the same team, which then in turn provides a sense of mutual support.

Fire and police know they’re filling a vital role in the village, the chiefs said.

“Someone has to answer the call,” Altman said.

At the same time, tending to the health and well-being of those who serve benefits the whole community, both chiefs agreed.