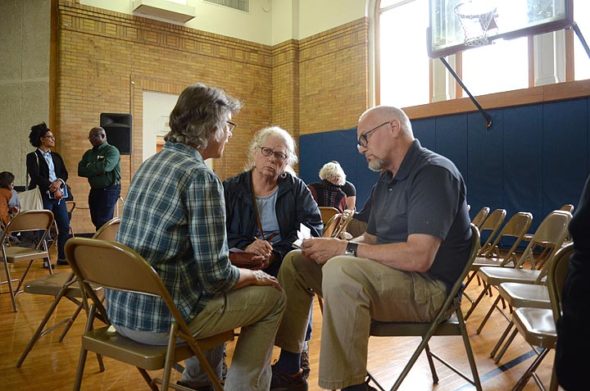 Participants in a Village policing forum on May 21 included, from left, Patti Dallas, Kate Anderson and YSPD Officer Doug Andrus, while, at back, Council members Kineta Sanford and Kevin Stokes observed. In small groups, participants shared a past positive interaction between police and citizens, then envisioned what a future YSPD might look like. (Photo by Megan Bachman)megan

Those were a few ideas that emerged at a forum on policing on Tuesday, May 21.

About 50 villagers helped identify the factors that contributed to a positive experience with a police officer, and envisioned a future Yellow Springs Police Department.

Nine members of the YSPD were also in attendance, including five officers dressed in plain clothes, along with the community outreach specialist, who all shared in small groups about their positive experiences with citizens.

Other top factors resulting from a positive interaction were that officers were knowledgeable, professional, respectful, that they knew the citizen on the call, de-escalated the situation, were accessible and made the person feel safe.

The forum was organized as part of a comprehensive analysis of the YSPD now underway by policing consultant Bob Wasserman of Massachusetts. That report is due to Council in late June or early July.

According to Wasserman, the forum was designed specifically to elicit ideas about “what the community wants in their police,” and not as a place to air grievances about “what’s going wrong.”

“In no way is anyone dismissing the concerns about what is going on,” Wasserman said this week. “But we need to not just wallow in that and instead think about where things go and what we want to become.”

Wasserman added that he has heard many concerns about past incidents from interviews with villagers in recent weeks, some of which will be incorporated into his final report.

As for the future, participants were asked to pretend they had fallen asleep for five years and then awakened to find a YS police department “completely in sync with the community.”

The top responses were that the Yellow Springs police department five years from now is:

• Fully integrated into the community (including all Village staff) with a sense that we are on the same team: 9 responses

• Safety-oriented, nonviolent and may not carry weapons: 5 responses

• Transparent (willing to admit mistakes) enabling the community to understand how it works and vice versa: 4 responses

• Made up of local residents: 4 responses

• Visible, out in the community riding bikes and walking downtown: 4 responses

Other suggestions were that the YSPD in five years “has resources to solve crimes,” is “kind and leads with love,” responds quickly to citizens even those they perceive to be negative, is cohesive with good communication, has online tools to stop misinformation and is nonexistent.

YS Police Chief Brian Carlson was in attendance at the meeting, and said he appreciated hearing from villagers what they want in their police department.

“The big takeaway was people want to know the officers,” Carlson said. “I want to figure out how to best facilitate that.”

Village Council member Lisa Kreeger was appreciative of the strong turnout, and looked forward to the community input being turned into “actionable” recommendations in Wasserman’s report. That villagers want their officers to live in town was also a theme that Kreeger noted.

“I left the meeting hearing loud and clear that a local PD is very important to the community,” Kreeger wrote in an email. “It will be important for the Village government to think about how to promote that outcome.”

Wasserman also said that the participation of local police in the discussions was “good movement forward” for the police-community relationship.

“I was very pleased to see the number of police officers who came and I thought they participated in a very meaningful way,” he said.

In business from Council’s May 20 meeting —

Clerk to be treasurer

Council voted unanimously to appoint Council Clerk Judy Kintner to also serve as Council treasurer. Kintner will now hold both positions, and said at the meeting that most Council clerks are treasurers.

The resignation of Treasurer Rachel McKinley was announced in May.

With the addition of treasurer duties, Kintner’s salary will be increased by $3,000, according to her contract. Council also approved a raise of 1.5 percent for Kintner’s clerk salary, to $52,977.

According to Council President Brian Housh, Council is required in its charter to have a treasurer, a position that provides general financial oversight and reports directly to Council. He also praised the work of McKinley and the new Village investment committee for increasing investment earnings, which rose from $7,095 in 2016 and to $36,014 in 2017 to $93,901 last year, according to a memo.

Council discussed raising rates this year at Gaunt Park pool. Pool rates have not been increased for a decade.

Most season pass holders would see an increase of $10, while day pass users would pay about $2 more to swim, according to a proposed rate increase.

The rate hike is needed because of the high costs to maintain the public pool, the last in Greene County, according to Village Manager Patti Bates.

The Gaunt Park pool runs at a loss, according to a memo to Council. For instance, last year the pool brought in $68,654 in revenue and cost $104,774 to maintain and upgrade. Over the last nine seasons, the Village general fund subsidized the pool to the tune of $455,000. Such a subsidy is common for municipalities with pools, according to Bates.

Council will consider legislation at an upcoming meeting, and new rates won’t take effect until at least June 17, so most who buy a season pass this year won’t pay more.

Council discussed parking problems at length after tabling a proposal from Village Manager Patti Bates to site a municipal lot at Beatty Hughes Park  due to community pushback.

Council Vice President Marianne MacQueen pushed for a study to “understand what the parking problems are, how much parking is enough and what kind of parking is needed.” She added that in her 47 years in the village, she’s never had a problem finding parking downtown.

Council member Kevin Stokes said he occasionally has trouble parking and that he would like Council to look at paid parking and find other ways to increase parking before considering “paving a park.” Kreeger added that residents should have more parking privileges than visitors.

There are 239 public parking spaces in the downtown area, not counting the spaces in private lots, Bates reported at the meeting.

Bates also said with parking at Beatty Hughes no longer a possibility, the Village needs to decide another use for a $22,100 grant from Greene County that must be used for a “permanent infrastructure improvement.”

Council’s next regular meeting is Monday, June 3, at 7 p.m. in Council chambers.