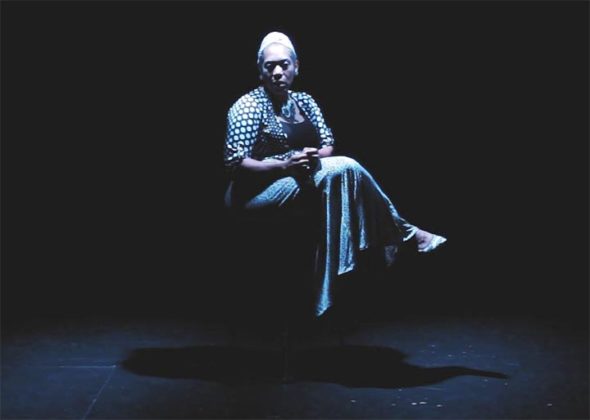 Felicia Chappelle as Vanessa in her one-act monologue, “Interrupted Motherhood.” The show debuts in Yellow Springs on Friday and Saturday, July 19 and 20, at the Foundry Theater. (Submitted Photo by Khalil Nasar)

For playwright and actor Felicia Chappelle, art is therapeutic — whether it’s being received or created. This is especially true for Chappelle’s one-woman show, “Interrupted Motherhood,” which will be staged Friday and Saturday, July 19 and 20, beginning at 7:30 p.m. at the Foundry Theater on the Antioch College campus.

“Writing [the play] definitely benefited my spirit,” she said in an interview last week.

“Adjusting to life with a new baby, conquering addiction and maintaining sexual wellness is an intense juggling act!” wrote Chappelle in an earlier email. “The story of ‘Interrupted Motherhood,’ then, focuses on a woman finally learning to care for herself. … What happens when you give up everything to love a man, but end up raising his children alone?”

Through Vanessa’s storytelling, other characters emerge, said Chappelle, though Vanessa is the only character onstage for the entirety of the show.

“An influential teacher told me once that the smallest unit on stage is always two,” she said.

Chappelle said her personal experience with divorce and single parenthood was the impetus behind the penning of “Interrupted Motherhood.” She was surprised to learn, both through research and evidence from her own life, how much being a single parent can impact women, both financially and personally.

“I read that even wealthy women can drop into poverty level, just by becoming the primary caregiver in a single parent home — the quality of life deteriorates that severely through divorce,” she said. “So I was really coming from a personal place, hearing stories coming from other women about how stressful it is to parent alone and still have some semblance of self.”

“Interrupted Motherhood” was written in late 2017, over what Chappelle described as a “painstaking” six weeks. She workshopped the piece with Kitchen Theater, a group of Miami Valley writers and thespians who meet to discuss new plays, read traditional scripts and support one another. A member of the group encouraged Chappelle to submit the piece for inclusion in Sinclair Community College’s annual “Emerging Voices” series, which is sponsored by the school’s Diversity Office and showcases up-and-coming Miami Valley theater talent. “Interrupted Motherhood” was chosen to be performed, and the play debuted there in April of 2018. The performance was followed by a staged reading at Central Chapel AME Church, which Chappelle gave to a full house in the church’s Family Life Center in June of last year.

Chappelle’s relationship with the theater began when she was a student at Antioch College, though initially, she only studied theater as an elective.

“By the end of the first quarter, it was a passion,” she said.

She studied under Denny Partridge, Steve Freeman and Amy Trotter,  who created the college’s theater studies program from scratch in the late 1980s, years after the dissolution of the Antioch Area Theatre. Chappelle and her fellow students toured the U.S. and the U.K. with their performances.

Where previously the Antioch Area Theatre had focused on popular plays performed by both regional and professional talent, the late ’80s and early ’90s saw a transition to student-led performances of increasingly politically minded works; Chappelle cited “Homeland,” a play about apartheid; “Freedom Days,” about racism and bigotry in the American South; and “Quien Vive,” based on the Iran-Contra hearings, as a few career standouts.

Chappelle remains committed to confronting issues of political and social justice in her working life; she is co-host and co-producer of “Talk to Me,” a monthly radio program on Central State University’s 88.9 WCSU-FM, with villager Dr. Venita Kelley. The community affairs program has featured guests such as Dayton Commissioner Jeffrey Mims, DNC Vice Chair Michael Blake, author and professor of African American Studies Dr. Carol Anderson and Yellow Springs’ own Bomani Moyenda, among many others.

“We’ve talked about how to resist the recent KKK rally, and talked about underrepresented and underserved folks,” she said. “’Talk to Me’  primarily asks, ‘What do we need to do to empower ourselves against systemized marginalization?’”

Chappelle also lent her directing skills to a production of “One Sunday in Birmingham,” by Dayton playwright Joyce Barnes, last year. The play follows character Ruby Watson, as she participates in the Children’s March on Washington after the 16th Street church bombings that killed four young girls in Birmingham in 1963; Chappelle directed the show as part of the Columbus Black Theatre Festival.

Outside of radio and theater, she’s been working on a memoir about her father, William Chappelle, the first draft of which she workshopped at the Antioch Writers Workshop. The memoir shares some thematic elements with “Interrupted Motherhood,” Chappelle said, as it deals with her parents’ divorce.

“Divorce was, not so long ago, something relatively unheard of,” said Chappelle. “Family life is definitely a big theme for me, and it’s important to show that we still have normalcy and a heart for family, especially in the African American community, where family and community have lost so much over the decades.”

As for “Interrupted Motherhood,” though it feels so personal to Chappelle — the subject matter is “lived-in,” she said — she feels it’s important for her to share with others.

“People who have seen it have said they felt touched and heard,” she said. “So it’s important to share our stories, so we know that we’re more alike than we are different.”

Chappelle plans to take “Interrupted Motherhood” on tour — she’s currently working with a promoter to set up performances in Chicago, Washington, D.C. and California, among other places — but she felt compelled to stage a full performance in the village first.

“People wanted to know when they could see it again, so I felt strongly that, before I take it on the road, I should start at home,” said Chappelle.

Chappelle called “Interrupted Motherhood” a “date night” show — that is, she suggested that those planning to attend leave the kids at home.

She also sent a shout-out of thanks to the community of Yellow Springs.

“I’ve learned so much being a lifelong villager, and the support and the love that people are showing me and the show really means a lot,” she said. “I’ll show it here, and then I’m gone.”

“Interrupted Motherhood” will be performed Friday and Saturday, July 19 and 20, in the Foundry Theater at Antioch College at 7:30 p.m., with doors opening at 7 p.m. each night. Tickets are available online for $12 through July 18 and $17 thereafter, or $20 at the door. A brief meet and greet will follow each performance. For more information, or to purchase tickets, visit http://www.womenworkwonders.com.