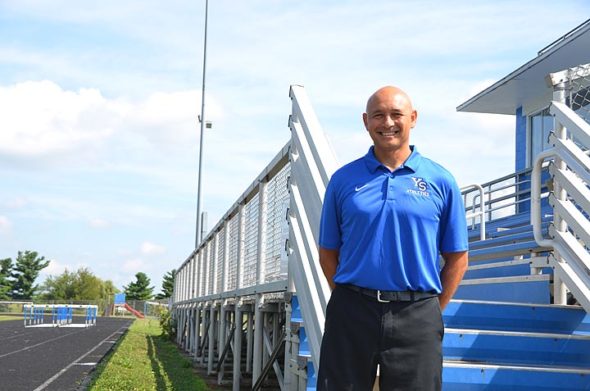 Jeff Eyrich is the school district’s new half-time director of athletics and student leadership. He was hired this summer to replace former AD Nate Baker, who took the head sports job with Huber Heights Schools. (Photo by Carol Simmons)

Jeff Eyrich believes in the power of sports to improve lives.

Baker’s departure happened quickly in late July, just as the new sports season was getting ready to ramp up with fall scheduling and team practices.

As Eryich got started, officially on Aug. 1, equipment and uniform orders were also on the immediate to-do list, along with meetings with coaches and other support staff.

But from all appearances, Eyrich is relishing the job’s demands.

“Sports never stop,” he said with a grin in an interview last week.

His focus is now on youth, but health and well-being remain his top priority, Eyrich said, sitting in his new office, adjacent to the middle/high school gym, a box of soccer balls on the floor by his desk, ready for play.

With two children at Yellow Springs High School, both of whom have gone through the local schools since kindergarten, Eyrich said he is excited to be working for the district.

When the opportunity to apply for the AD job arose, “something just called me and said, ‘yes,’” he said.

And he feels his has something unique to offer.

“I feel one of my [strenghts] is I was in an industry that took care of people,” he said.

Describing himself as “a people person,” Eyrich said he looks forward to interacting with the wide spectrum of people that are part of school athletics — students, parents, teachers, coaches, referees and administrators and coaches from other schools.

Born in Plattsburgh, N.Y., Eyrich was 3 when his family moved to Ohio’s Greene County, the result of his Air Force father’s assignment to Wright-Patterson Air Force Base. Except for four years as a student at Wilmington College, he’s lived in the Xenia area ever since.

His service on various professional and community organizations has included the boards of directors of several area agencies, including the Xenia YMCA, as well as membership in the Xenia Rotary Club and Xenia Old Fashioned Days Committee. He is currently president of Club X Soccer, the Xenia-based select soccer organization with which he previously served as director of teams and assistant coach.

He said his main sport through high school and college was soccer, playing for the Wilmington Quakers throughout his time there. He also wrestled and played baseball as a high school student and later played softball with adult leagues. His wife, Kristen, is also a soccer enthusiast, having played all four years as a student at Wright State University.

“She gets my reasoning for leaving the health care and management field to go into the athletic world,” he said, even though the Yellow Springs position is half time. His salary is $38,710.

Eyrich said he has several goals for the Yellow Springs athletics program.

For one, he’d like to see an increase in the number of students participating in school sports. And he’d like to see  more community members “sitting in the seats” at games and meets, along with an infusion of energy into the booster’s groups.

Yellow Springs currently fields 13 team sports, with a budget of about $25,000. Repairs to the middle/high school athletic field and track, estimated at $1.3 million, have been delayed while the district seeks possible outside funding and sponsorships. In the meantime, this year’s track team will have no home meets, Eyrich said, with all events to be held away until the fraying track is repaired.

Primary among Eyrich’s goals, however, is to “create a culture that’s geared toward developing strong student-athletes,” he said.

A fundamental value of that culture is commitment, he said. He wants Yellow Springs athletes to “understand that their commitment to the sport they signed up for is no different from the commitment they have made to school, their job, or whatever.”

Ultimately, commitment is more important than ability, he said, adding that he doesn’t want anyone to stay away from sports because they don’t think they’re good enough.

“We have room for everyone,” he said.

Commitment and character speak to the second half of Eyrich’s new job title: director of athletics and student leadership.

Reflecting on the leadership-building part of the job, Eyrich said he would like to facilitate more student-athletes and even whole teams doing service work in the community.

“To branch outside of these walls to gain characteristics of what a leader really is,” he added.

“It gives our student-athletes the opportunity to face challenging situations,” he said.

Athletics, he concluded, “help form you into a complete person.”

One Response to “Building character through sports”