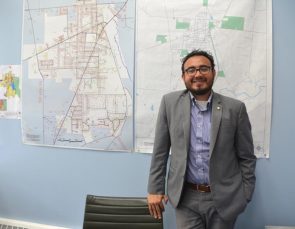 New Village Manager Josue Salmeron, pictured here in his office, has had a busy first month on the job. “You realize you have so may things going on, so many things to address,” he said. “It takes your breath away.” (Photo by Megan Bachman)

For one, it highlighted the need to map out the miles of underground water and sewer pipes owned by the Village — one of many overdue infrastructure upgrades.

It also typified a fast-acting and compassionate crew. After shutting off water service to four downtown businesses, the crew delayed their own work to accommodate a Wildflower Salon customer, whose hair was in the process of being dyed, with an acute need for a rinse.

“Fortunately we have an empathetic and compassionate decision-making team,” Salmeron said of the crew, headed by Public Works Director Johnnie Burns.

“Your hair is part of your identity,” Salmeron added. “[Burns] recognized that, while a 30-minute delay prevents his team from doing what they need to do, there is a business, and a human, affected.”

As Salmeron concluded his first month on the job, he sat down with this Yellow Springs News reporter to talk about his activities and priorities for the village.

Asked to describe his first 30 days, the words that came to Salmeron’s mind were “fun” and “exciting,” followed by a description of a heavy workload.

“You realize you have so may things going on, so many things to address,” he said. “It takes your breath away.”

For instance, Salmeron has already begun preparing to put a municipal tax levy renewal on the November 2020 ballot, even while he deals with crises right in front of him, like the water line break.

Such a workload requires that he prioritize, Salmeron said.

“My first priority is, what’s going to keep things from hitting the fan. What are the high risk items?”

Those “high risk items” fall into two categories, Salmeron explained — infrastructure and public safety. His daily huddles with heads of both those departments — Burns and YS Police Chief Brian Carlson — are a place to learn what happened the day before and what the day’s challenges will bring.

“I started the huddles because I realized I didn’t have all of the information I needed,” Salmeron said.

Data is essential to improving the effectiveness of local government, Salmeron believes. That’s why he hopes to gather more of it more frequently to better understand how the Village is operating.

“I don’t want to know what you’re doing every moment, but we need performance measures,” Salmeron said.

For example, he wants to make sure that the YSPD is documenting “every engagement,” so that he can review the activities of each officer, and he has already instituted a “work order” system for the Village Utility Office to manage service requests.

The goal of such data analysis is improving efficiency and productivity, Salmeron said.

“We want to assure our residents that we are being good stewards of taxpayer money. That’s our No. 1 responsibility,” he said.

On the plus side, the Village’s organizational structure is solid, and its employees are its “greatest asset,” Salmeron said.

“We have talented individuals with the right attitude,” he said.

“You don’t have individuals anchored into the old way of doing things,” he said.

When it comes to the critical area of public safety, Salmeron almost immediately started working with Chief Carlson to update YSPD’s policies. He’s also focused on the Village’s role in event management.

“We are a destination economy, and there are things we can do better,” he said of events.

As an example, during the annual YS Pride, an armed robbery took place concurrently with the Pride parade through downtown, stressing the YSPD’s capacity to respond, Salmeron said.

“We have events that exceed our capacity,” Salmeron explained. “We need to make sure that the public is safe.”

As for infrastructure, Salmeron is finding that the sewer system is one area in most need of improvement. But any upgrades should have the future in mind, he emphasized.

“We shouldn’t just be focused on repairs, but on the future. If we don’t do projects that better prepare us for the future, all we will be doing is putting out fires,” Salmeron said.

Municipal broadband may be one way to “invest in our success for the future,” Salmeron added.

Salmeron is adamant that the village should “shape the future” rather than let current trends change who the village is. Yellow Springs is an aging community, for example, but while one villager told him to “embrace that,” Salmeron sees that as a “fatalistic approach.”

“We can probably survive, but if we survive, will there be much of us left?”

As for Salmeron’s own history, he graduated from the college in 2006, choosing the school thanks to an Antiochian counselor at his high school. That school, Bell Multicultural High School, is located in the diverse Columbia Heights neighborhood of Washington, D.C., where he grew up.

Salmeron was born in the coastal town of Las Tunas, El Salvador, in 1983, during that country’s civil war. Due to the war, its economic impact and many other reasons, the family decided to leave when realizing, there was no future for them there, Salmeron said.

“The families that could afford to get their young men out, did,” he said.

Salmeron’s mother had sold everything she had, and been living in the U.S. for five years, when Salmeron emigrated at age 7 as an unaccompanied minor.

Salmeron attained his permanent resident status a few years later, when his mother did, then became a U.S. citizen more than a decade ago.

“I was not going to miss my opportunity to vote for Obama,” Salmeron said of that decision.

In March, Salmeron traveled back to El Salvador with his wife, Tania Hutchinson, also an Antioch alum, and their two young children, Ahnika, 6, and Josue Brooks, 3. More recently, the family has been getting settled in the village, and closed last week on a house in town.

Asked about how his personal journey and experience as an immigrant has affected him, Salmeron discussed both his challenges, and the privileges that allowed his family to emigrate.

“Intellectually, we all have life challenges that give us a different view. I have my life experiences. I know the discrimination I’ve faced. But I also am aware of my privilege and my family’s privilege.”