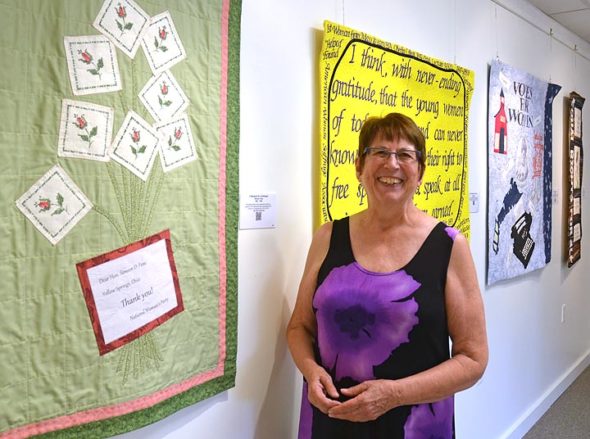 YSAC Gallery is currently exhibiting suffrage-themed art quilts created by members of the Miami Valley Art Quilt Network. “Suffragists: And They Persisted!” honors the 100th anniversary of women gaining the right to vote. Villager and quilter Chris Zurbuchen, pictured here, will give a presentation from 2 to 4 p.m. on the show’s last day, Sunday, Sept. 15. (Photo by Audrey Hackett)

When was the first time the White House was picketed by citizens?

In January of 1917, suffragist Alice Paul and members of the National Woman’s Party stood outside the White House gates — a history-making first — to protest President Woodrow Wilson’s opposition to women’s suffrage. Undeterred by weather, taunts and threats, the “silent sentinels,” as they were known, insisted that women gain equal access to the ballot.

Over two years later, with the passage of the 19th amendment in 1920, women did.

“We forget this history,” villager Chris Zurbuchen observed recently. “The rights we take for granted were secured by generations of amazing women.”

Zurbuchen toured this reporter around “Suffragists: And They Persisted!” a show of art quilts currently on exhibit at the Yellow Springs Arts Council Gallery. The quilts were created by members of the Miami Valley Art Quilt Network to honor the upcoming 100th anniversary of women’s suffrage.

The 19th amendment, giving women the right to vote, passed the U.S. Senate in June 1919 and went out to the states for ratification. Ohio was the fifth state to ratify. Tennessee was the last, in August 1920, clinching the three-fourths majority required to make the measure the law of the land — at least for white women. Full enfranchisement for women of color came later.

The YSAC show celebrates the 1920 milestone — and the century of effort that preceded it — with more than 20 art quilts and quilt squares depicting figures and themes from the suffrage movement.

Members of the quilt guild began planning the show two years ago, according to Zurbuchen. But rather than representing well-known figures such as Susan B. Anthony, the quilters opted for lesser-known women (and one man), many with ties to Ohio.

“We wanted to go with more local, lesser-known women,” she said.

Zurbuchen herself created two quilts displayed in the show, both honoring local heroes of the suffrage movement.

One quilt pays homage to Olympia Brown, a 1860 graduate of Antioch College. The nation’s first woman to be ordained a minister by an established denomination (the Universalists, later the Unitarian Universalists), Brown stepped down from full-time ministry when she was 53 to work for suffrage. In her 80s, she took part in the “silent sentinel” protest, burning President Wilson’s speeches in front of the White House.

Happily, Brown was one of the few original suffragists who lived long enough to vote in the 1920 presidential election — the first open to women.

On Zurbuchen’s quilt, Brown is depicted next to the Cascades in Glen Helen.

“She and her friends took walks in the Glen because physical education was denied to women students” at Antioch, Zurbuchen explained of her choice of setting.

Zurbuchen’s second quilt in the show pictures a stylized “bouquet of thanks” from suffrage leaders to Antioch College President Simeon Fess, an active promoter of women’s suffrage. He worked unsuccessfully to get the vote for women in Ohio in 1912, then continued his efforts on the federal level as a U.S. representative and senator — with better results.

“He was instrumental in getting the 19th amendment passed, and all these suffragists thanked him,” Zurbuchen explained of the theme of her quilt.

The bouquet on her quilt is made of cloth coasters cross-stitched with flowers, probably of 1950s vintage. The coasters denote the contrast between women’s  daring efforts to gain the vote and the confining social roles women occupied, Zurbuchen said.

Other quilts in the show honor the amazing Ida B. Wells, an African American journalist, educator, suffragist and early leader of the civil rights movement who co-founded the NAACP; suffragist Rachel Brill Ezekiel, great-grandmother of Yellow Springs resident and women’s studies scholar Judith Ezekiel; and Amelia Jenks Bloomer, founder of a pro-suffrage Ohio newspaper called “The Lily” and perhaps best known as the creator of bloomers, a more practical fashion choice for women.

“These are such wonderful quilts, created by really talented quilt artists,” Zurbuchen said.

Significant historical research went into the making of the quilts, she added. In her own case, she credits Antioch College Archivist Scott Sanders with helping her identify and research Brown and Fess.

“Suffragists: And They Persisted!” runs through Sunday, Sept. 15, with a special presentation by Zurbuchen from 2 to 4 p.m. on the closing day. She will discuss the depicted suffragists, with an emphasis on their Ohio and Yellow Springs connections.

Also on Sept. 15, the League of Women’s Voters will have a voter registration booth set up in the YSAC Gallery — a reminder that the election of 2020 is, in some ways, no less momentous than the election of 1920.