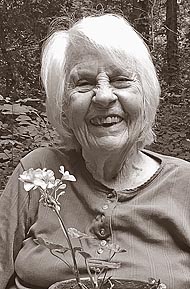 Hazel was born June 25, 1924, in Chappaqua, N.Y., to Charles and Elsie Batchelor. She was raised as a Quaker (Friend) in a family that had special love for music, languages and the out-of-doors. She attended Northfield preparatory school, then went to the University of Michigan, where she met Walt Tulecke. They married and had four daughters, moving to Yellow Springs in 1967. She completed her master’s degree at Wright State and worked as a counselor, eventually developing her own private practice. She and Walt divorced in 1973, and in 1988 Hazel married Bill Houston, her beloved partner of many years. In 2015, upon Bill’s death, Hazel was cared for at home by members of her family and a number of other helpful caregivers for three-and-a-half years, moving to Friends Care in July of this year.

Hazel was a delight to be with, and took great pleasure in life itself: people, the natural world, humor, playing the piano, riding her bike — all of it. Yet what stands forth in her life for many of us is the way she took action to realize her dreams of a better world. She wrote letters, demonstrated, taught and sang her convictions. She travelled to where there was need for voices to be heard in favor of justice and peace, whether in this country or elsewhere — in Haiti, Guatemala and Nicaragua. And she was willing to be jailed for her stances on environmental and foreign policy issues, several times engaging in civil disobedience that brought sentences of weeks or months, which she served with an adventuresome spirit.

In Yellow Springs, Hazel is known for her works to establish the sister village project between El Jicaro, Nicaragua, and Yellow Springs, as well as the Saturday Peace vigil that has been held continuously for 18 years.

The sense that the world’s children were hers, too, was a natural result of Hazel’s parenting and grandparenting. She was very aware of the kind of world she wanted us all to move toward for the coming generations. In her words: “Will we and the world get past this violence and the pull toward violence? I think it’s still possible — the wonders of the human spirit are incalculable, I believe.”

Hazel’s family and friends will miss her greatly. She was preceded in death by her daughter, Peggy; her brother, Jack; and her sisters, Ruth and Page. She is survived by her daughters, Kari Tulecke, Heidi Eastman and Kim Beyer; eight grandchildren, Josh and Shawn Tulecke Paulson, Jessica (Eastman) Farrell, Nick and Luke Eastman, and Marcianna (Beyer) Morse, Celeste (Beyer) Huck and Danika Beyer; and seven great-grandchildren, Linden, Rowan, Asher, Liam and Laurel in Vermont, and Corey and Anna in Oregon.

A memorial service is planned for Nov. 16, at Rockford Chapel, with details to be announced.