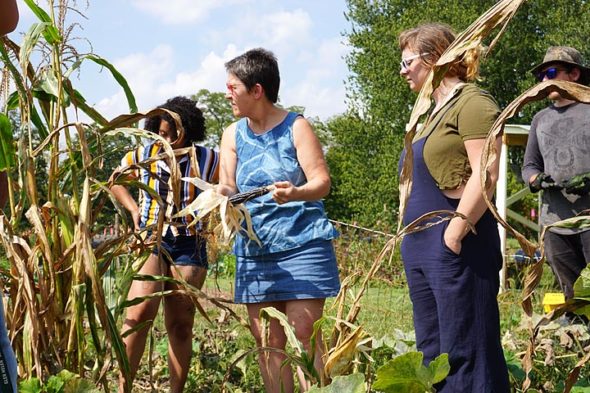 A look at Antioch Farm— ‘The fruits of our labor’

Bridgeman, on the faculty in Antioch’s co-op department, had brought members of a class she teaches in seed preservation to the college-based farm for a quick check in with the ripening crops.

Her focus this unseasonably warm, buggy September afternoon were several long rows of corn — specifically popcorn — growing in one of the newest additions at the farm — a “three-sisters” garden.

The so-called three-sisters method —  planting corn, climbing beans and squash in companion with each other — was developed by the indigenous people who first tended crops on the land where the college now sits.

Like many courses that use the farm as a living classroom, Bridgeman’s seed class encompasses a variety of disciplines, including botany, ecology, environmentalism, agriculture, traditional cultures, economics and sustainability.

Linebaugh, 58, from Clinton County, said he was raised on a traditional farm and wanted to work at the Antioch Farm to learn about “the organic and sustainable methods they use.”

Although the farm’s current practices inspire those who work, learn and volunteer there, they came under scrutiny this summer when a villager campaigned against the college’s plan to butcher nine farm lambs as part of the school’s farm-to-table program. The ensuing controversy over the fate of the animals opens an opportunity to look at the Antioch Farm and its role in the college’s sustainability efforts.

The concept of sustainability — which has been defined as meeting today’s  needs without compromising the ability of future generations to meet theirs — has been central to Antioch’s mission since its rebirth in 2011. And the farm, established in conjunction with the school’s new beginnings, remains at the heart of the school’s curriculum and identity, according to faculty, staff and students.

“Sustainability was a major focus when the college reopened,” Kat Christen, the farm’s manager since its founding said in a recent interview.

“Eight years later, this is the fruits of our labor,” she said, sitting in a shaded area amidst growing environments, ranging from a “food forest,” to a medicinal herb garden, to two acres of well-tended vegetables and flowers, to more than five acres of pasture for animal grazing.

Located on the southern portion of the college’s campus, the 35-acre farm property includes a 600-square-foot hoop house, bee hives, a pollinator-friendly patch and a composting area.

A copse of fruit trees planted five years ago is now beginning to come into production as well, Christen said.

The farm, staffed mostly by students, serves not only as a learning laboratory for a host of classes, like Bridgeman’s, but also contributes to a farm-to-table dining program in which students are fed by the produce, eggs and meat grown there.

That circular impact of one endeavor on another, “really changes the way you inhabit spaces,” Christen said.

“My role on the farm is to provide this environment for students to learn in, but also provide nourishing foods,” she said.

Food sources include typical garden vegetables — the three-sister’s garden produced more than 1,200 pounds of winter squash this year — as well as wild-foraged plants.

The farm, which is certified by the Ohio Department of Agriculture for egg production, keeps chickens, ducks and geese for their eggs and meat. A small flock of lambs also is maintained in the college’s five-acre solar array, where they naturally mow the ground under and around the solar panels that provide an energy source for the college.

Animals to be eaten are taken to a USDA-approved facility for butchering, a “small farming” operation, Christen said.

The school’s intention to butcher the nine lambs currently living on the farm, with the meat earmarked for student consumption, sparked controversy this summer as the debate ignited in letters to the editor of this newspaper and grew in intensity on Facebook.

Villager David Nibert, a sociology professor at Wittenberg College, bought advertising in the paper and initiated a petition among other academics across the country to “save the lambs.”

Identifying himself as vegan, Nibert wrote that Antioch’s efforts to be an ethical social justice leader could not be realized if the college followed through with its plan to kill and eat the animals.

College officials responded by describing the dining halls’ practice of providing vegetarian and vegan food options while also offering limited meat sources for its omnivore students. Noting that 80% of students are meat-eaters, Antioch asserted that its farming practices offered a humane alternative to so-called “factory” farms.

The controversy escalated to a recorded, phoned death threat against an Antioch employee and, according to Nibert, alleged threats against him and his supporters, about 35 of whom staged a protest in the village one recent Saturday afternoon.

Dining hall staff have reportedly asked for security personnel to accompany them to their cars at night because they don’t feel safe. 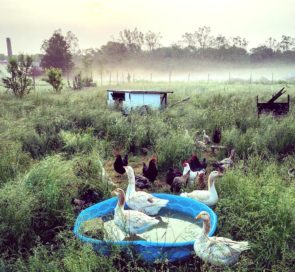 On a June morning this year, local photographer James Luckett captured the chickens, geese and ducks on the Antioch farm. Luckett is now an assistant chef in the Antioch kitchens. (Submitted Photo by James Luckett)

Life on the farm

The controversy has had surprisingly little effect on farm operations, Christen said. Most students don’t participate on Facebook, or read the local newspaper, she said, and so they remain generally immune to the hostility of the debate.

“The farm is a really peaceful place for them to come,” she said.

Student and paid farm worker Colby Nelson-Betz agreed as he weeded during a recent Tuesday volunteer session for which he was the only person on hand.

“It’s beautiful,” he said simply, as the yellow early-evening light fell across the growing plants.

In other recent conversations, students seemed surprised that the lambs were an issue. At the same time, college administrators were reluctant to expose students by name in fear for their safety.

Kim Landsbergen, associate professor of biology and the science division chair at Antioch, “a lot of students include facets of sustainability and environmental science” in their curricular studies. And the farm speaks directly to those interests.

“Applied ecology is in greater demand as more and more people are realizing the environment is something we can’t take for granted,” Landsbergen said in a recent interview.

According to student Ryan McCall, being on the farm underscores the understanding “that we can’t separate ourselves from our consumption.”

For Christen, who lives just outside the village on her family’s organic farm, the Antioch Farm, and the food it produces, touches on multiple justice-related topics, including “food security, food access and food equity.”

On its website, the college touts the fact that while the average meal in the U.S. travels 1,500 miles to reach consumers’ tables, food from the Antioch farm travels about 1,500 feet.

In a followup interview at her home, Bridgeman, who has been with the college since 2013, said that classes on the farm, and in the kitchen, not only teach students about living responsibly and respectfully in the world, but also teach life skills that have become distant memories in many families — canning, drying and other methods of food preservation; soap and candle making; fabric dyeing.

“Students are one or two generations away from those old skills,” she said.

They learn how to live in ways that reflect their personal ideals, several students agreed.

The farm also offers a place for self-expression, Christen said.

Inspired by meeting people working with asylum seekers at the U.S.-Mexico border, Christen this year created a “safe-passage garden.”

The purpose is to provide an avenue for butterfly migration while raising awareness about violence against human migrants.

“It gives us a physical space to talk about it,” Christen said.

Classes across all college disciplines use the farm, with courses in soil science, hydrology, somatic psychology, Eastern philosophy and epistemology among them.

Antioch has earned a variety of recognitions for its sustainability efforts.

The latest report by the Association for the Advancement of Sustainability in Higher Education, or AASHE, listed Antioch seventh for food and dining and third for grounds maintenance, out of more than 500 reporting institutions.

Also, for the second year in a row, the Sierra Club last month listed Antioch College as one of its “cool schools,” or greenest colleges.

According to the book “Fields of Learning: The Student Farm Movement in North America,” published in 2011, college-based farms have a long history, but recent decades have seen a significant boon, especially at liberal arts colleges.

“The size and dynamism of this movement are truly remarkable,” editors Laura Sayre and Sean Clark write.

Christen is pleased with Antioch’s rankings within those numbers.

“Our little tiny school, with our minimal resources. … I’m really proud of that,” she said.