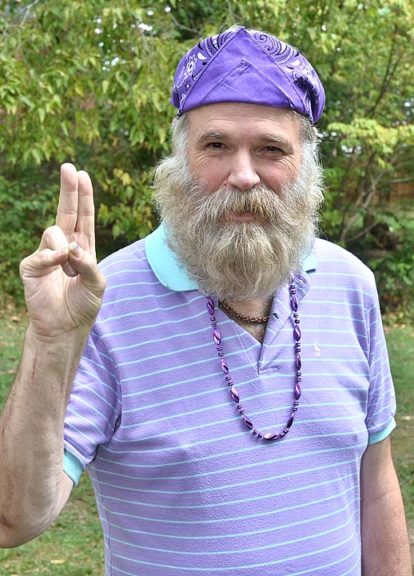 Phillip Loveless, a former resident and local spiritual teacher, is running for mayor of Hillsboro to make the area a "peace mecca" (Photo by Matt Minde)

Former village resident and local spiritual teacher Phillip Loveless is hosting a fundraiser this week to raise money for his write-in campaign to be the next mayor of Hillsboro, in Highland County.

Loveless, who also goes by the surname Love, said he wants to revitalize the southern Ohio community’s downtown. In addition, by creating more connections to nearby Serpent Mound in Peebles, Loveless envisions remake the community as a “new spiritual center in Ohio,” he said in a recent interview.

“I want people from all over the world to come to Hillsboro as a peace mecca,” Loveless said.

Finally, Loveless said that if he, a Democrat, were elected, he could help make sure that “Highland County turns from red to blue” in next year’s presidential election.

Loveless, a Xenia native, first came to the village in 2013 after living abroad for many years. A practitioner of Reiki Gong, which combines reiki with yoga, he has organized numerous workshops in the village over the years and also had a private practice in the Union Schoolhouse.

In recent years, Loveless moved to Franklin and started offering healing workshops in and around Serpent Mound. But he still comes to Yellow Springs to practice three times per week, he said. The 62-year-old is also an author, whose latest book, “Message of Awakening,” will be released soon by New Republic.

If elected, Loveless said he would work to erect in Hillsboro a U.S. version of the World Peace Gong, a symbol of world peace erected in Indonesia in 2002 and later replicated in other countries. Loveless is the spiritual director for the World Peace Gong project, he added.

Also running for the open seat of Hillsboro mayor is Republican Hillsboro City Council member Justin Harsha, and Antony Weissmann, the city’s former building officer/building code enforcement officer fired from his position this summer, according to the Highland County Times.

For more information on the fundraiser or to buy tickets for the fundraiser, visit: https://www.facebook.com/events/552621395478914/